Arts Policy During the Pandemic: What Are We Measuring, and What Can We Know? 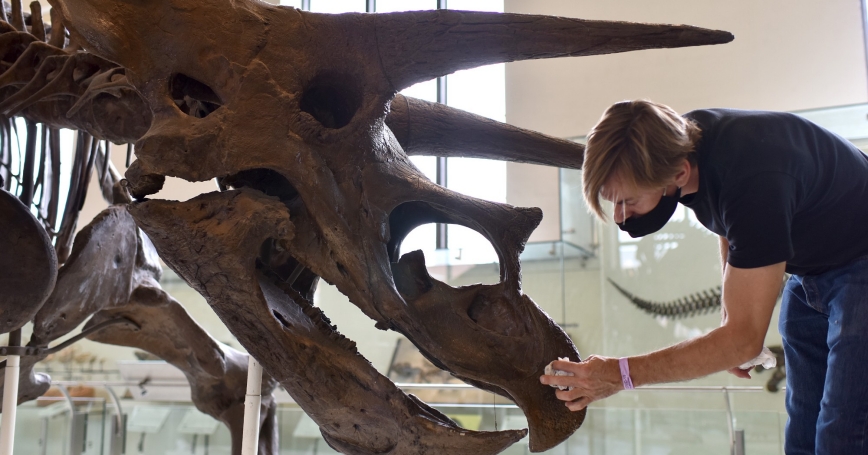 Trenton Duerksen cleans a Triceratops horridus dinosaur on display at the American Museum of Natural History in New York, September 1, 2020

The COVID-19 pandemic has been particularly devastating for artists and arts organizations. If there is a silver lining, it's that coordinated efforts by arts advocacy groups in cooperation with bipartisan Congressional leadership have reinvigorated public discussion of arts policies. December's omnibus COVID-19 relief bill included $15 billion in grants for certain types of performing arts venues. There has also been sustained discussion of how the arts may fit into a holistic recovery plan and how the Biden administration may overhaul and even reimagine how the federal government supports the arts.

Data and evidence are critical pieces of any rigorous policy discussion. But in the case of the arts—and specifically the labor market for artists—few data sources exist. And of the sources that do exist, each measures a different, partial piece of a larger puzzle. Researchers and practitioners studying the arts labor market will therefore have to grapple with two questions before undertaking any analysis: Which data source should be used, and how should “the arts” be defined? Here's some guidance.

Two surveys frequently cited in research reports on the arts are: the Current Population Survey (CPS) and the Quarterly Census of Employment and Wages (QCEW), both of which are administered by the Bureau of Labor Statistics. Both provide regularly updated data collected via rigorous, documented methodologies, which has allowed for monitoring rapid changes in the labor market during the pandemic. Other data sources exist, but they are either released infrequently (for example, the Arts and Cultural Production Satellite Account from the Bureau of Economic Analysis was last produced in 2017); are based on statistical projections (for example, the monthly Current Employment Statistics); or are proprietary (for example, Americans for the Arts' COVID-19 survey).

Data and evidence are critical pieces of any rigorous policy discussion. But in the case of the arts, few data sources exist.

The CPS is a monthly survey of approximately 60,000 households that are selected to be representative of the noninstitutionalized civilian population at the national and state level for the purposes of determining employment rates. The CPS contains detailed information on individual workers, including their employment status, income, the industry in which they work (or, for those who are not employed, most recently worked), and their primary occupation Using sample weights, statistics calculated from the survey (such as unemployment rates) can be scaled to the population as a whole. Sample weights allow researchers to adjust for how many people in the wider population a single survey respondent “represents,” based on their personal characteristics. But researchers must make sure not to make extrapolations from just one or two CPS respondents. For example, if there is just one unemployed choreographer in the data, it would be inappropriate to make deductions about the overall unemployment rate for choreographers; that one individual cannot be assumed to adequately represent all unemployed choreographers in the population.

In contrast to the CPS, the QCEW is not based on a sample of individuals but instead focuses on establishment-level data extracted from administrative records, primarily from state unemployment insurance programs. The QCEW reports the number of employees, the wages paid, and the number of establishments in each industry, down to the county level. The QCEW is a census, meaning it tallies the entire population rather than sampling a subset of the population, so survey weights and sample sizes are not a concern. But QCEW data may be suppressed due to small sample sizes and confidentiality requirements, which may be relevant when analyzing more granular industry codes for smaller geographic areas (e.g., counties).

The choice of whether to use CPS or QCEW will depend on the purpose and focus of the analysis. As Table 1 below shows, each source is well-suited to a different purpose. The CPS is useful when individual person-level outcomes are of interest, including labor force participation and occupation. Because it surveys people, the CPS also covers certain groups that the QCEW does not: those who are self-employed, unemployed, or not in the labor force. Because the CPS surveys a relatively small portion of the U.S. population each month (between 117,196 to 120,811 people during 2019 were in the households sampled) the CPS may yield subpopulations that are too small to conduct certain analyses. This is of particular concern when analyzing subpopulations conditioned on more than one demographic (e.g., race by occupation or occupations by industry).

The QCEW is better suited to questions about business establishments, such as trends in the number of arts organizations and museums, or trends in how many employees they have. Since the QCEW focuses on the establishment and the CPS focuses on the individual, employment information is aggregated differently. The QCEW reports everything by industry, whereas the CPS identifies both a worker's industry and occupation. The differences are important, especially when studying artists, as shown below.

Before the differences between the employment numbers can be illustrated, it's necessary to address the important question of how should “the arts” be defined? There is no single standard, and the answer likely depends on the research question. In prior RAND work, “artist” was defined based on the set of occupations used by the National Endowment for the Arts (PDF), regardless of the industry within which they work. Other studies may begin instead with arts industries, using the six-digit NAICS code to identify arts and cultural establishments. As a benchmark, the calculations below focus on establishments with NAICS codes beginning in 711 (Performing Arts and Sports Companies, Promoters, and Agents) and 712 (Museums, Historic Sites, and Similar Institutions).

The choice of data source also affects the resulting picture of the arts market. Conceptually, industry codes denote what a business establishment does; occupation denotes what an individual employee does. Not all workers in a given industry have the same occupation, nor do all workers within a given occupation work in the same industry. The Venn diagram in Figure 1 shows the overlap, prior to the pandemic, between workers in arts industries (defined by the NAICS code) and workers who are artists (defined by occupation) as recorded in the CPS.

It should be no surprise that the arts industry employs more than just artists: around 618,000 individuals according to the CPS. The most common occupational codes for these individuals are: landscaping and grounds keeping workers; managers; non-retail sales managers; security guards; and animal caretakers. (The latter group are present because zoos are included in NAICS code 712.) Conversely, there are many artists who do not work in arts industries. In fact, out of around 2.9 million artists nationwide as of January 2020, just 504,000 were working in the arts industry. The remaining 2.4 million were in a variety of industries, but most often in specialized design services (which includes interior, jewelry, costume, floral, and fashion design); architectural, engineering, and related services; motion pictures and video industries; and other professional, scientific, and technical services (a broad category that includes commercial photography, market research, translation/interpretation, and veterinary services). In light of these observations, researchers may wish to choose a more customized definition of “arts industries” that might include additional NAICS codes specific to their interests.

The CPS and QCEW also record different sets of workers in terms of employment status. In particular, the QCEW does not cover self-employed workers or public employees. This is particularly relevant for studies of artists because, a substantial number of artists are self-employed. This, along with the misalignment of industry and occupation, means that the data are capturing different samples of workers and therefore total employment may differ when using CPS versus QCEW. To illustrate, in Figure 2 data was pulled to compare total private-sector employment through the first six months of 2020 in two ways, by tracking occupations in the CPS or industries in the QCEW. Total employment provided by the two sources is substantially different, yet the trends for performing artists (CPS) and the arts, entertainment, and recreation industry (QCEW) industry track fairly closely. However, as noted earlier the salaried arts/entertainment industry clearly employs other occupations besides performing artists and the graph shows how difficult it is to link employment among non–performing artists to industry-specific changes: they far outnumber the total employment of the individual arts industries, and the uptick in employment by June 2020 suggests that hiring must have been occurring outside of the arts industries.

Ultimately, the research question should determine the appropriate dataset and the variables of interest. To study workers who are most likely to be affected by the $15 billion grant program, an industry-level analysis such as that afforded by QCEW may be optimal. After all, the relief grants are targeted to businesses, not workers, and as Figure 1 shows many people whose livelihoods are tied to the arts economy are not themselves artists. But if instead we wanted to understand the gaps in the relief bill by measuring how many people will not benefit from it, or what the effects are on performers specifically, we might look at self-employed artists in the CPS. States or counties interested in the contribution of the arts to its economy or job market may also be interested in the QCEW data (understanding that it is only a lower-bound since independent workers and the unemployed are not counted). On the other hand, if advocacy groups, disaster preparedness organizations, educators, or tourism promoters are interested in understanding the makeup and distribution of the artist community, the CPS data may be more informative.

James Marrone is an associate economist, Susan Resetar is a senior operations researcher, and Daniel Schwam is a quantitative analyst at the nonprofit, nonpartisan RAND Corporation.