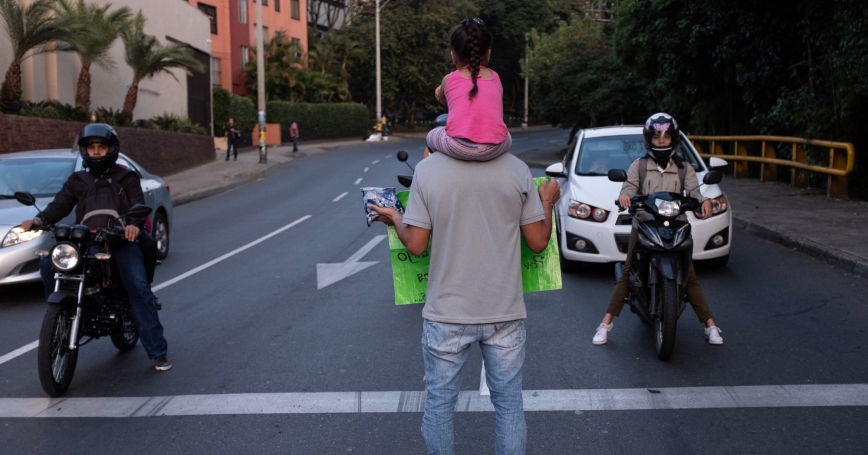 A Venezuelan refugee with his daughter on his shoulders asks for help at a traffic light in Medellin, Colombia, February 11, 2019

Colombia recently announced it will give temporary protection status (TPS) to a million undocumented Venezuelan refugees, with permission to live and work in the country for 10 years.

It created a new model—economically beneficial for both the refugees and the host country—for managing its own refugee situation and perhaps others elsewhere. As a result, the Biden administration followed suit, declaring Venezuelan migrants eligible for TPS.

An estimated 80 million people in the world are forcibly displaced. Of these, 26.3 million are refugees who have fled their homes to live in host countries that are hospitable enough to accommodate them. The remainder are internally displaced. Syria, with 6.6 million, and Venezuela, with 3.7 million, are the top two countries of origin for refugees.

Life for refugees who have fled their homes is extremely difficult, especially during a pandemic. The often overburdened social services of host countries are strained further by large refugee populations, giving rise to understandable resentment from citizens and local governments. Therefore, many host countries do not allow refugees to work in order to shield their populations from job competition. Refugees resort to informal work for low wages and without social protections.

Colombia has created a new model for managing its own refugee situation and perhaps others elsewhere.

Colombia's approach—a medium-term solution that enables refugees to work legally and contribute to the tax base that funds social services—avoids the risk of political backlash that permanent integration is likely to incite. It also addresses the problem seen elsewhere of refugee communities remaining in limbo for decades. By granting refugees this reprieve to earn a livelihood, Colombia is promoting economic inclusion in the face of a persistent global problem, while buying time to seek long-term durable solutions.

Venezuelans are willing to do work Colombians do not want to do, providing a useful source of labor to coffee growers and other industries. We found such willingness to work among Syrian refugees in Jordan, Turkey, and Lebanon in our recent study.

Despite policies that made obtaining work permits difficult, 85 percent or more of male refugees were willing to work. They wanted the necessary permits to work legally in an expanded set of sectors. While the proportion of women willing to work was lower, even those who did not work in Syria were now willing. Sidestepping legal prohibitions, host-country employers hired Syrians and mostly found them hardworking. These firms wanted clarity in regulations and consistency in enforcement that would give them confidence in hiring Syrians legally.

While Colombia is geographically and culturally distant from the Middle East, a few of our findings and recommendations may be of relevance as the country embarks on this bold experiment.

In countries we studied, while host-country citizens were sympathetic to the plight of the refugees, they were also resentful about the real and perceived competition for scarce jobs and social services. Similarly, Venezuelan refugees have faced increasing backlash in host countries in South America. Highlighting the contributions of refugees to the local economy and disseminating facts on costs incurred in hosting them could counter misinformation, preventing the fraying of the social fabric.

Highlighting refugees' contributions to the economy and disseminating facts on costs incurred in hosting them could counter misinformation.

The unmet needs of women refugees (PDF) we discovered may also have applicability in Colombia. Providing a safe work environment, transportation to and from work, and childcare assistance could encourage women refugees and host-country women alike to enter the labor force, thereby increasing the country's productive capacity.

Nearly 10,000 businesses in Turkey have been started by Syrian refugees. Colombia has a strong entrepreneurial spirit and ranked well on global business indicators prior to COVID-19.

Reinvigorating entrepreneurship by trimming the bureaucracy and taxes for small businesses might prove useful in reviving Colombia's economy after the pandemic. And if its refugee population is included in these efforts, they may not only ease the pressure on jobs by providing work for themselves but also create jobs for others.

We also found a need to train refugees in market-relevant skills. Providing necessary training programs to all eligible residents and not just refugees could improve social cohesion. Backlash against refugees is likely to be highest when local opportunities are scarce; all three countries we studied were struggling economically.

While Colombia had been following prudent macroeconomic policies, it has suffered a deep economic contraction during the COVID-19 pandemic. The government's fiscal and monetary responses can ease short-term pain, but policies aimed at long-run job creation for the entire economy would be necessary. Investment in public infrastructure could be one option to revive the economy and create jobs.

The global community might also have a role to play in this economic recovery. When we interviewed officials in Jordan, Lebanon, and Turkey, we heard the view that these countries were providing a “global public good” by hosting refugees.

Colombia's action of legalizing Venezuelan refugees, especially during these challenging times, is innovative, pragmatic, and inspiring. Steps to promote social cohesion, increase entrepreneurship, and create jobs for all could ensure this experiment is a successful one.

Krishna B. Kumar is director of international research for the nonprofit, nonpartisan RAND Corporation and the Pardee Initiative for Global Human progress at the Pardee RAND Graduate School. Shelly Culbertson is a senior policy researcher at RAND, focusing on refugees. Louay Constant is a senior policy researcher at RAND who has studied education, livelihoods, and sustained returns in contexts of displacement. They collaborated on a recent RAND report, “Opportunities for All: Mutually Beneficial Opportunities for Syrians and Host Countries in Middle Eastern Labor Markets”.

This commentary originally appeared on Newsweek on March 25, 2021. Commentary gives RAND researchers a platform to convey insights based on their professional expertise and often on their peer-reviewed research and analysis.