Pathways Toward Peace in Yemen: National Reconciliation or a 'Phased' Approach? 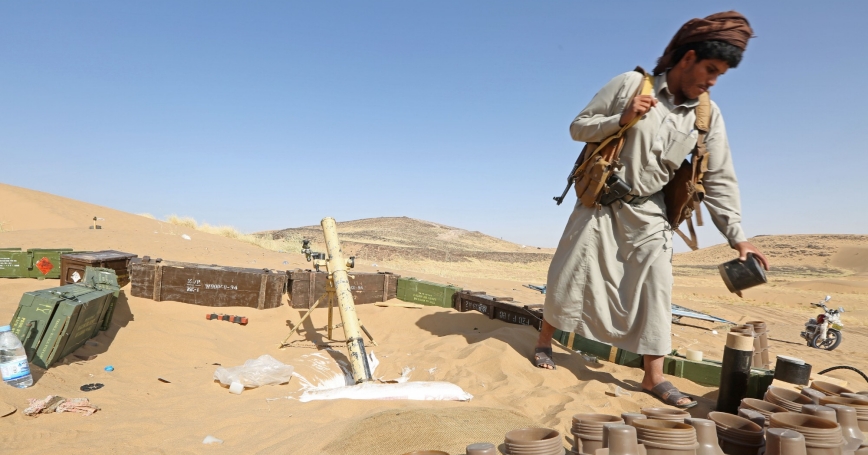 A pro-government tribal fighter stands at his position in Marib, Yemen, October 2, 2020

On March 1st, the Biden administration announced that the United States would be “reinvigorating [U.S.] diplomatic efforts to end the war” in Yemen. In this announcement, made during a virtual donors' conference, Secretary of State Antony Blinken rightly concluded that addressing the acute humanitarian crisis—which has left more than 80 percent of the population, including more than 12 million children, in need of humanitarian assistance—requires finding an end to the nation's civil war.

As we described in a recently published RAND report, there are two primary pathways toward ending the war in Yemen. The first pathway is to continue with—and perhaps double down on—the current U.N.-led efforts that focus on national reconciliation, which put a premium on preserving Yemen's sovereignty and geographic integrity. While Saudi Arabia and the internationally recognized Republic of Yemen government are reportedly committed to these efforts, the success of this approach would likely require major political concessions to the Houthis that the Saudis and Republic of Yemen government have been unwilling to make.

The second pathway is to refocus, at least in the near term, on international peace-building and state-building efforts on Yemen's southern and eastern governorates. This approach would allow the international community to focus first on addressing the infighting within the Saudi-led coalition that has undermined national peace talks and allowed al Qaeda, the Islamic State, and other groups to flourish. Such an approach, while perhaps more feasible to implement given Houthi intransigence, would require a willingness to accept a divided Yemen over at least the near term.

The Yemeni civil war is quickly approaching a new and potentially decisive turning point, as the rebel Houthi movement is currently waging an aggressive campaign to conquer the governorate of Marib (an oil- and gas-rich governorate that represents the last northern stronghold for the Yemeni government) that may change the trajectory of the civil war.

If Marib falls, the Yemeni government will not only suffer significant military losses, but it also could represent a major blow to the government's bargaining position in peace talks.

If Marib falls, the Yemeni government will not only suffer significant military losses—having to redeploy forces to the south and losing a critical supply line with its coalition ally Saudi Arabia—but it also could represent a major blow to the government's bargaining position in peace talks. Houthi control of Marib may preclude the possibility of national reconciliation efforts (the first pathway), as the Houthis would likely be unwilling to participate in a transitional government or power-sharing agreement unless guaranteed a dominant position.

Ending the fighting in Marib is an imperative, as Secretary Blinken and many others have highlighted. This city is home to over 800,000 Yemenis displaced by earlier fighting in the war who live in or around Marib City, and the humanitarian costs could be devastating if the battle reaches these camps and the population center.

However, getting the Houthis to end their offensive and return to the peace process will likely require considering alternatives to national reconciliation. Given their momentum on the ground, the Houthis have little reason to accept peace and return to the status-quo ante as a marginalized political group contained in the north.

Getting the Houthis to end their offensive and return to the peace process will likely require considering alternatives to national reconciliation.

The phased approach that we described in our research, in which international state building efforts are refocused in the near term on Yemen's southern and eastern governorates, may offer a more viable alternative to ending the violence. Under this pathway, the international community could focus on securing a durable cease-fire and then begin building institutions and structures to achieve inclusive growth, governance, and security in the south. At the same time, the international community must continue to provide essential humanitarian relief in the northern Houthi-controlled areas. This pathway would require security commitments from the international community to ensure the integrity of the regions and contain competition within the fractious coalition, as well as a willingness to accept a divided Yemen over at least the near term.

While this phased approach may be preferable to continuing the conflict, it is not without costs and risks for the Yemeni people. Any potential pathway to an enduring peace could take decades to recover from the economic, political, and social costs of this civil war. Our phased approach could require patience from the Yemeni people and a robust and enduring commitment from the international community. But war has brought Yemen to this point, and there are few remaining options.