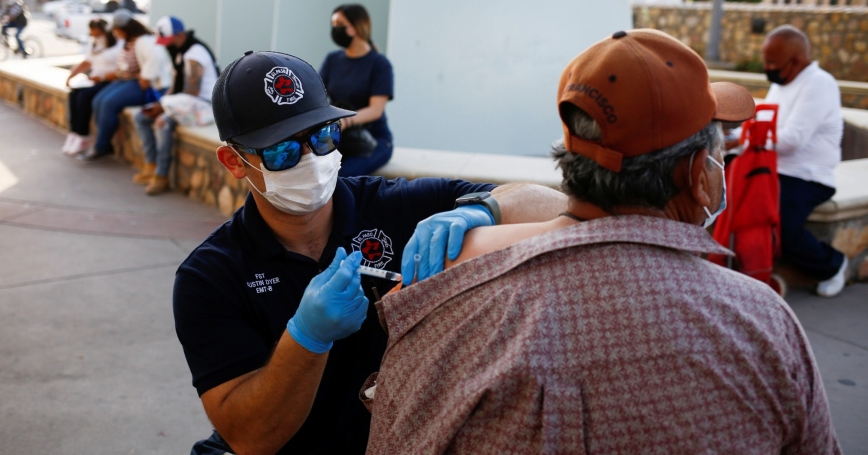 A health care worker from the El Paso Fire Department administers a COVID-19 vaccine at a vaccination center in El Paso, Texas, May 7, 2021

More than 150 million Americans—over half of U.S. adults—have received at least one COVID-19 vaccine dose. But many people are hesitant to get the shot. A recent poll found that more than a quarter of Americans will not try to get vaccinated.

Why are so many people opting out? The reasons vary. Even though the available COVID-19 vaccines have been found to be safe and effective, some people doubt that getting the shot will better protect them from the virus. Others are concerned about side effects. And some simply don't trust the public health and government officials who are urging them to get the vaccine. In fact, one RAND study showed that public trust in the Centers for Disease Control and Prevention declined 10 percent from May to October 2020, a critical stretch of the pandemic.

Of course, vaccine hesitancy isn't new, and it isn't specific to COVID-19. Last year, I gave a virtual TEDx talk about the growing problem of vaccine hesitancy in recent years. How could it be that, despite having more scientific data than ever before to show that vaccines are safe, skepticism about them seemed to be getting worse?

More than a quarter of Americans will not try to get vaccinated.

In my talk, given before any COVID-19 vaccines had been authorized by the FDA, I considered how vaccine hesitancy might affect the ongoing fight against the pandemic. Now, more than six months later, we're seeing it play out. The spread of misinformation and disinformation, which is rampant over social media, is one of the factors fueling vaccine hesitancy. And in turn, it's threatening our ability to end the pandemic for good.

Online falsehoods come in many forms, from the unintentional spreading of misinformation, to conspiracy theories, to malign and subversive information campaigns conducted by U.S. competitors. But disinformation is just one part of a larger problem—Truth Decay, the diminishing role of facts and data in American public life.

Truth Decay is not an entirely new phenomenon, but its current manifestation has worsened and spread since the early 2000s. It's defined by several trends, including growing disagreement about basic facts (something that is happening around vaccines) and declining trust in institutions, such as the news media and the government (another problem witnessed in the COVID-19 era).

Truth Decay is caused by a set of powerful drivers. One such driver is something that we all experience: cognitive biases that shape how we process information and make judgements and decisions. In the case of vaccines, for example, we might value a friend's story about vaccine side effects more than we value scientific data from a clinical trial, because we trust that friend and because their experience resonates with us emotionally.

Political and social polarization play a role, too. Many people tend to be surrounded by people who are similar to themselves and to get their information from sources that reinforce their opinions. We end up in insular environments that allow false narratives to thrive, making it increasingly difficult to change minds or to correct falsehoods.

Although stopping vaccine disinformation can help address vaccine hesitancy, it may not be enough.

Ultimately, our current era of Truth Decay means that people often don't know what's true and what isn't. They also don't know where to look to get the facts needed to make informed decisions. And although stopping vaccine disinformation can help address vaccine hesitancy, it may not be enough. Truth Decay is a large and complex problem and countering it could require a multifaceted approach.

Potential solutions include targeted communication to replace false beliefs with facts; presenting scientific evidence in ways that are meaningful and understandable to non-scientists; teaching people how to spot false information; bridging polarized divides; and improving the management of online communication spaces.

Steps like these could be essential to restoring the role of facts in America. And as daily COVID-19 vaccination rates in the United States are on the decline, promoting specific facts and scientific data could be vital. It could help stop a deadly disease that continues to spread, saving both lives and livelihoods.