What the United States Wants from Japan in Taiwan 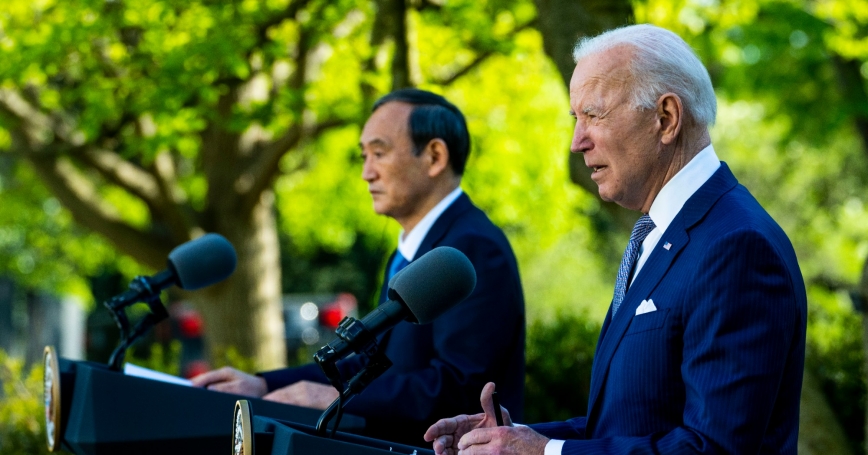 When Japanese Prime Minister Yoshihide Suga became the first foreign leader to visit U.S. President Joe Biden in the White House last month, their joint statement garnered a lot of attention. For the first time since 1969, the leaders referenced their shared interest in the “importance of peace and stability across the Taiwan Strait” and “the peaceful resolution of cross-Strait issues.” Although a similar (albeit shorter) reference was made in a joint statement (PDF) between their foreign and defense ministers a month earlier, the statement was nevertheless welcomed by Taipei and downplayed in China, with embassy officials in Washington saying they were “resolutely opposed” to the statement.

Yet, the alliance's unity over Taiwan was temporarily shaken only a week after the summit when, in parliamentary debate, Suga said including Taiwan in the statement did “not presuppose military involvement,” meaning it did not suggest Japan's Self-Defense Forces would get involved should a conflict erupt.

Chinese media interpreted his remark as cold feet, reporting “Japan troops won't get involved if China invades Taiwan.” And Taiwan, seeking to downplay Japan's apparent change in heart, vowed to safeguard its own security. Yet, Suga's statement is not incorrect, nor does it contradict the joint statement. Not being a formal ally of Taiwan, it would be odd for Japan to declare an unconditional military commitment in any situation. Suga's statement could best be interpreted as taking a page out of the United States' own playbook on strategic ambiguity. As long as Japan stays vague on its level of commitment, China is forced to consider both U.S. and Japanese possible involvement in any plans it has to invade Taiwan.

Including Taiwan in recent statements—and debate over Japanese involvement in a contingency—raises an important question. If a Taiwan conflict breaks out, what might the United States request of Japan? For the alliance, the answer is critical if the countries want to translate expressions of support into actual planning and preparation.

As long as Japan stays vague on its level of commitment, China is forced to consider both U.S. and Japanese possible involvement in any plans it has to invade Taiwan.

At a minimum, the United States would require access to its bases in Japan, from which it would execute combat operations in, over, and around Taiwan. Per a 1960 exchange of notes between then–Japanese Prime Minister Nobusuke Kishi and then–U.S. Secretary of State Christian Herter regarding implementation of their bilateral security treaty, the United States agreed to engage in “prior consultation” with Japan if it wants to use its facilities and areas as bases for combat operations. These engagements would be undertaken from Japan except for defense of Japanese operations.

Although access is an operational necessity, Self-Defense Forces' support would act as a force multiplier for any U.S.-led operation. That means U.S. requests for Japanese involvement would be almost certain. And the United States knows Japan's level of involvement would depend on how the country's political leadership defines the situation. If Japan is not attacked and conflict appears somewhat limited, it is possible Tokyo may define the situation as only having an “important influence” on Japan's security. Legally, this would limit Japan's involvement to noncombat, rear-area support roles. If Japan is directly attacked—including attacks on U.S. bases on Japanese territory—or if Tokyo defines the situation as being a threat to Japan's survival, Japanese involvement could include combat and the use of force, although it is not clear whether the latter situation provides as much latitude as an actual attack on Japan. The United States, of course, would want Japan to define the situation as broadly and urgently as possible to allow for maximum operational flexibility, regardless of whether or not Japan has been attacked. Given the proximity of any kind of combat to Japanese territory and the deleterious effect such a contingency would have on Japan's fuel and food supply chains, this argument may not be difficult to make.

If Tokyo interpreted an attack against Taiwan as only an “important influence” on security, there are several likely operational areas the United States may ask Japan's Self-Defense Forces for assistance with. Most of this would be within Japanese territory. Protection of U.S. bases in Japan would be critical, particularly given the lack of short-range air defense capabilities at U.S. bases. Another would be logistical support in Japan, including supply, maintenance, transportation, engineering, and medical services. Further from Japanese shores but not within the territorial airspace or waters of another country (and not near areas where combat is taking place), the United States would likely want Japanese assistance with intelligence, surveillance, and reconnaissance activities as well as search and rescue and personnel recovery. Depending on the severity of the situation, the United States might request the Self-Defense Forces to help handle refugee flows into Japan and possibly conduct noncombatant evacuation operations in Taiwan itself.

Should Japan get attacked or Tokyo define conditions as being a threat to Japan's survival, the United States likely would expect the Self-Defense Forces to conduct the full spectrum of activities as laid out in the country's 2015 security legislation to include the use of force. The United States may request help defending Japanese airspace through defensive counter-air operations and surface-to-air missiles and defending maritime areas through surface and subsurface operations, anti-submarine warfare, and anti-ship cruise missiles. Providing armed escorts for U.S. ships and aircraft between Japan and the battlespace is another likely request. Combat search and rescue and personnel recovery is also likely, albeit closer to Japanese shores due to Japan's limited capabilities. As these examples suggest, the United States could look to Japan to use its capabilities to support and affect the conflict near Taiwan with the use of force.

Japan's involvement could make an operational impact in many areas. Regardless of what the United States requests, however, Japan's involvement will always be a political decision. When the Suga administration agreed to include Taiwan in recent statements, it must have understood this signaled Japan's commitment to do something if the “peace and security” of the Taiwan Strait is broken. If Japan does nothing or underwhelms in its support, not only would the U.S.-Japanese alliance be shaken, but the strength of the whole U.S. network of allies could be called into question.

There are hopeful signs this situation can be avoided. For example, Tokyo is reportedly studying possible responses by the Self-Defense Forces to various scenarios involving Taiwan. Moreover, a recent poll by Nikkei showed 74 percent of the Japanese population support engagement in the Taiwan Strait.

For Japan's political decisionmaking to keep pace with U.S. operational timelines, Japan needs to know now what the United States will likely request in wartime.

As many Japan watchers know, Tokyo historically has tended to approach the use of military force through a legalistic lens. Depending on what box a situation checked, Japan's level of involvement varied. Should China attack Taiwan, the United States is likely going to look for a quick operational commitment. Japan's typical approach of clearing various administrative hurdles would likely not cut it in a rapidly changing operational environment. For Japan's political decisionmaking to keep pace with U.S. operational timelines, Japan needs to know now what the United States will likely request in wartime. These discussions could already be occurring, and if so, it is important to get them right.

Having expressed support for securing the peace, the United States and Japan need real plans to translate their words into action. As a recent Nikkei article argued, “Japan cannot be neutral in this picture.”

Jeffrey W. Hornung is a political scientist at the RAND Corporation. He specializes in Japanese security and foreign policies, East Asian security issues, and U.S. foreign and defense policies in the Indo-Pacific region, including its alliances.

This commentary originally appeared on Foreign Policy on May 10, 2021. Commentary gives RAND researchers a platform to convey insights based on their professional expertise and often on their peer-reviewed research and analysis.