Russia Engine Troubles: Is Putin's Behavior Catching Up with Him? 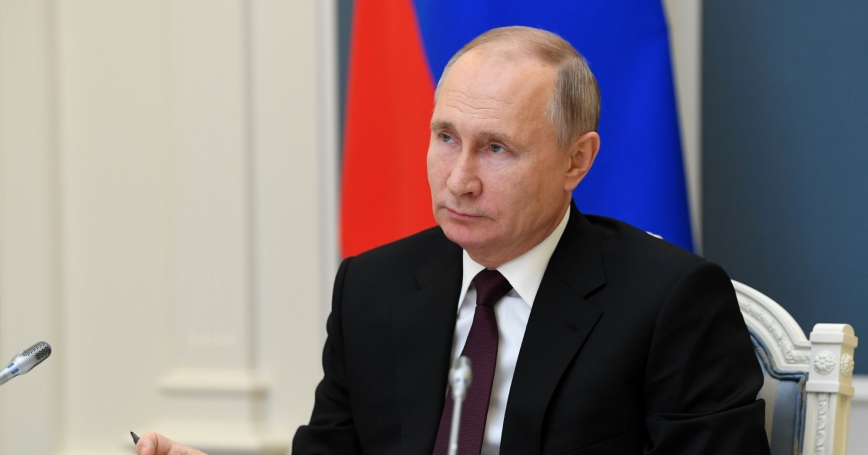 The United States, along with allies and partners, imposed sanctions and export restrictions following Russia's annexation of Crimea, its election interference, and attempts on the lives of regime opponents. The sanctions are likely to be a topic of discussion during President Joe Biden's summit with his Russian counterpart Vladimir Putin on June 16 in Geneva.

To mitigate the impact of the sanctions, Moscow pursued a policy of import substitution to offset losing access to vital components for its civilian and military manufacturing sectors. For instance, Russia was reliant on Ukrainian manufacturers like Motor Sich and Zorya-Mashproekt for marine and aircraft engines. These companies not only provided key inputs for Russia's own military capabilities, but also for those systems that Russia exported to other nations.

Russia's attempts to substitute domestic production for previously imported technologies have been delayed and in many cases have fallen short. The main problem with Russia's import substitution program is its inability to acquire high-tech machine tools (PDF) from Western suppliers for industrial production.

Subsidiaries of Russia's United Engine Corporation (UEC) pursued development of advanced marine engines to replace those previously imported from Zorya-Mashproekt but have faced various difficulties. Many of these issues are symptoms of larger problems in the Russian military-industrial complex. For example, Moscow made the decision to write-off debt held by UEC, United Aircraft Corporation, and United Shipbuilding Corporation as a result of years of financial issues and mismanagement. The extent to which the Russian government can continue to prop up the defense industrial base is not clear. Putin has stated recently that renationalization of the industry is one possible path the government could pursue.

The termination of the Russian defense industrial relationship with Ukraine has had cascading effects for Russia's arms exports.

What is clear is that the termination of the Russian defense industrial relationship with Ukraine has had cascading effects for Russia's arms exports. Russia was negotiating deals with both India and Vietnam to export naval vessels, but both prospective sales have encountered problems. In the case of Vietnam, negotiations are currently stalled for lack of engines. India, in contrast, had to acquire marine engines directly from Ukraine in early 2021, separate from Russia, for installation on the vessels. India has separately pursued joint production of marine turbine engines with Rolls-Royce. These workarounds do not bode well for future Russian arms sales.

Recently, Russian officials announced that production for a civil aircraft had been stalled due to Western sanctions. Russia has also used its intelligence services to assist in the pursuit of aircraft engine development. In April, the FBI added an intelligence officer for Russia's Foreign Intelligence Service, who was working as a UEC executive, to its most-wanted list for allegedly conspiring to steal trade secrets from a Western aerospace company.

Further harming Russian aircraft development and production is the rise of China's defense industry. Increasingly, China has transitioned from, and even replaced, Russian engines with its own domestically-built ones. The rise of China and other new competitors in the international arms market may challenge Russia's transition to greater indigenous production because its military-industrial complex partially relies on export orders to sustain itself.

The rise of China and other new competitors in the international arms market may challenge Russia's transition to greater indigenous production.

Russia tried to address its engine production challenge by purchasing a Norwegian marine engine facility. For a variety of reasons, Norway's Ministry of Justice and Public Security announced in March that it had blocked the sale of Bergen Engines, which produces and maintains marine engines for Norwegian intelligence vessels. The Norwegian facility has been owned by Rolls-Royce for years, but it has struggled to turn a profit. Importantly, the international conglomerate seeking to buy the Norwegian facility was Russia's Transmashholding, which is not a sanctioned entity like UEC. It is listed neither on the Office of Foreign Asset Control's Specially Designated Nationals nor its Sectoral Sanctions Identifications List (PDF).

Nevertheless, the Norwegian government stated it blocked the sale due to national security concerns. Norway's Ministry of Justice highlighted how the sale would have benefited Russia's defense industry and that permitting the sale could have allowed it to circumvent Western sanctions. The Norwegian government, as a founding NATO member, did not believe the immediate economic benefits of Bergen Engines' sale outweighed the security risks inherent in providing military naval engines to its aggressive neighbor.

Like Norway, many countries around the globe are on high alert for Russia's provocative actions. Norway stood up to Russia and put its security and that of its allies and partners ahead of potential short-term economic benefit. This is an example other countries might follow.

Chandler Sachs is a research assistant and John V. Parachini is a senior international defense researcher at the nonprofit, nonpartisan RAND Corporation.