We Studied COVID-19 Cases After Birthdays. Family Gatherings Can Still Be Dangerous 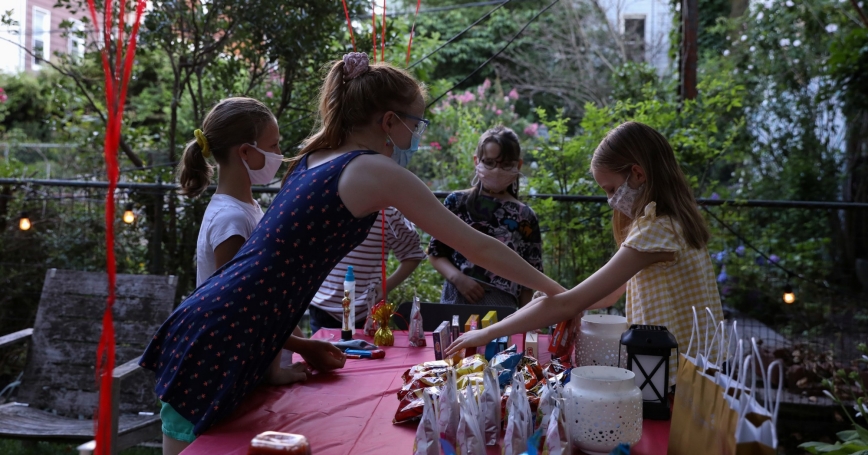 Lydia Hassebroek hands out candy to classmates at her birthday party in Brooklyn, New York, July 12, 2020

by Christopher M. Whaley and Anupam B. Jena

Despite more than a year of significant restrictions on formal gatherings, America has seen more than 33.5 million confirmed cases of COVID-19 and nearly 602,000 deaths. This high toll is likely partly due to informal social gatherings that have not been subject to state and local restrictions. They are often small, intimate, and involve people we trust. And that makes them dangerous.

One study found that peoples' compliance with public health recommendations like wearing masks depended on the perceived risk of COVID-19 among the people with whom they interact. Another hypothesized that people might not view being with friends and family as being in a truly public setting.

Exactly how risky is it to gather with a small group of others whom you know? In our new study, we looked at whether COVID-19 rates increase in households in which a member recently had a birthday.

Why birthdays? First, they are special occasions that give people a reason to gather, perhaps even during a pandemic. Second, everyone has a birthday at some point during the year, which means that given the right data, we would have plenty of potential individual-level exposures to study. Third, birthdays happen throughout the year and therefore should be unrelated to other factors driving the pandemic. From a study perspective, birthdays are an ideal “natural experiment” that can be used to quantify the risks of COVID-19 when people gather.

Our research is based on data from a nationwide sample of nearly 3 million U.S. households with employer-based insurance, provided by Castlight Health. Like all health insurance data, these had information on birthdays of insured individuals, including children, and information on whether and when an insured person received a medical diagnosis of COVID-19.

In counties in the top decile of COVID-19 prevalence, the likelihood of infection in a household increased by about 30% in the two weeks following a household birthday.

For each week between January and November of 2020, this allowed us to compare households with and without a birthday in the previous two weeks. We found that in counties in the top decile of COVID-19 prevalence—counties in which transmission of the disease was high—the likelihood of infection in a household increased by about 30% in the two weeks following a household birthday, compared with households in the same county that did not have a birthday. This corresponded to an absolute increase of 8.6 more cases per 10,000 individuals in households that had a birthday in the two weeks prior.

Among households in counties with low COVID-19 prevalence, we didn't find any increased rate of infection in the weeks following birthdays, suggesting an obvious but important intersection between the impact of social gatherings and the trajectory of the pandemic in the household's area.

We don't exactly know why the effects might have been larger for child birthdays. Perhaps households were less likely to cancel a birthday party for their kids, the number of attendees was greater, mask-wearing and other physical distancing efforts were lower, or a combination of these factors.

No Partisan Differences in Gatherings

Interestingly, we did not find that the overall link between birthdays and COVID-19 differed if the majority of people in the household's county voted for Donald Trump or Hillary Clinton in the 2016 election. It means that for this particular reason to socially gather—birthdays—there were no differences by political leanings.

We also did not find differences based on whether a shelter-in-place policy was in effect in the household's county, suggesting that these policies had less impact on informal social gatherings, such as birthday parties. We also looked at whether rainfall during the week of the birthday affected our findings, hypothesizing that rain could drive gatherings indoors and therefore increase any risk of COVID-19 associated with a household having a birthday. But rainfall did not matter.

Our findings highlight the role that informal social gatherings play in the spread of COVID-19 and, in particular, why gatherings that involve people we know might not be as low-risk as perceived.

Our findings highlight the role that informal social gatherings play in the spread of COVID-19 and, in particular, why gatherings that involve people we know might not be as low-risk as perceived. These gatherings likely happen around many other events similar to birthdays. For example, work by the Centers for Disease Control and Prevention and others has highlighted the role of weddings in spreading COVID-19. Unlike our study, however, selection bias in who chose to attend a wedding during the pandemic is a concern in interpreting those findings.

The research we did highlights an important tension complicating the pandemic. Social gatherings are a fabric for families and society as a whole. However, as we show, in high-risk areas, they can also inflame the pandemic and expose households to COVID-19 infections. When designing and communicating policies, it is critical that policymakers consider these risks.

Christopher Whaley is an economist and policy researcher at the RAND Corporation. Anupam B. Jena is an economist, physician and the Ruth L. Newhouse Associate Professor at Harvard Medical School.

This commentary originally appeared on USA Today on June 21, 2021. Commentary gives RAND researchers a platform to convey insights based on their professional expertise and often on their peer-reviewed research and analysis.