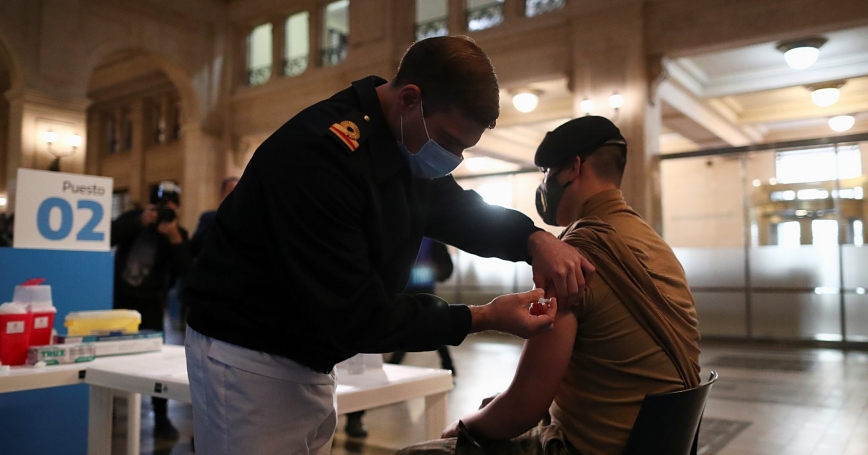 A member of the Armed Forces receives a dose of the COVID-19 vaccine obtained under the COVAX program in Buenos Aires, Argentina, June 15, 2021

In a country and a world connected by commerce and the air we breathe, it is hard to see how any COVID-19 recovery that is confined to specific segments of the population is sustainable. If we do not address gaps, we run the risk that a future mutation or two of this ruthless virus could send us scurrying for cover. Again.

Vaccination rates, for one, are uneven in the United States. In the bottom-most quintile of counties, less than a quarter of the population is vaccinated. In these counties—which are typically rural, poor, and less educated—new variants are likely to spread rapidly, or further mutate. Already the highly-contagious Delta variant, first seen in India, accounts for over half of the new U.S. cases.

The pandemic has exacerbated existing health and economic disparities in America. Black, Latino, and Native American people died at higher rates. The economic pain has been felt most deeply among workers whose jobs could not be done from home and the small businesses that employed them, while the richest got ahead and the stock market soared. The country as a whole is in a much better economic situation now since the depths of the pandemic, but nearly 9.5 million people are still unemployed.

Meanwhile, there are labor shortages and upward pressures on wages in sectors demanding higher skills such as manufacturing and educational services, not in the low-wage leisure and hospitality sector. These shortages are likely to be intensified by efforts to revamp the nation's infrastructure. Women left the labor force in record numbers, and the recovery is likely to be slower for them. Monetary policies adopted by the Federal Reserve during the pandemic to inject generous amounts of money into the economy in conjunction with supply chain disruptions have caused inflation; increases in food prices, in particular, tend to affect low-wage earners the most.

Vaccine hesitancy is a first-world problem. In the rest of the world, the lack of vaccine availability is the challenge.

Globally, the scene unfolding on split screen is even more stark. The Delta variant, after wreaking havoc in India has spread elsewhere, to as many as 85 countries. Asia, Latin America, and Africa are seeing surges. The number of deaths worldwide due to COVID-19 at the halfway mark of 2021 has exceeded those in 2020. Vaccine hesitancy is a first-world problem. In the rest of the world, the lack of vaccine availability is the challenge. Only 0.3 percent of shots administered worldwide have been in low-income countries, whose economic woes mirror health and vaccine challenges.

Developed countries, even those that have vaccinated a large share of their populations, such as Israel and the United Kingdom, and those that have not since they escaped earlier surges, such as Australia and Taiwan, are not immune to increasing cases. Many have reinstated public health measures.

All this does not look like a pandemic in retreat.

Continued vigilance is therefore needed, as exhausted as the country might be from the pandemic. Providing vaccination incentives, combating misinformation, and messaging and education tailored to specific communities could help in getting the rest of the country inoculated. Investment in skills and job training, with an eye toward the future of work, could help connect the unemployed with unfilled job openings. Reskilling and expanding child care assistance could help women reenter the labor force.

Globally, increasing the availability of vaccines is critical. The recent pledge by the G-7 countries to supply vaccines to the poorer countries is laudable, but might not be enough to meet the massive demand. A ramping up of production in developed countries and helping developing countries increase their capacity is urgently needed to address supply issues. Relaxing trade restrictions in vaccine components, and other goods in general to solve supply chain challenges, could be beneficial to all countries.

The world needs to be as relentless as the virus to defeat it.

Krishna B. Kumar directs international research for the nonprofit, nonpartisan RAND Corporation, and the Pardee Initiative for Global Human progress at the Pardee RAND Graduate School.