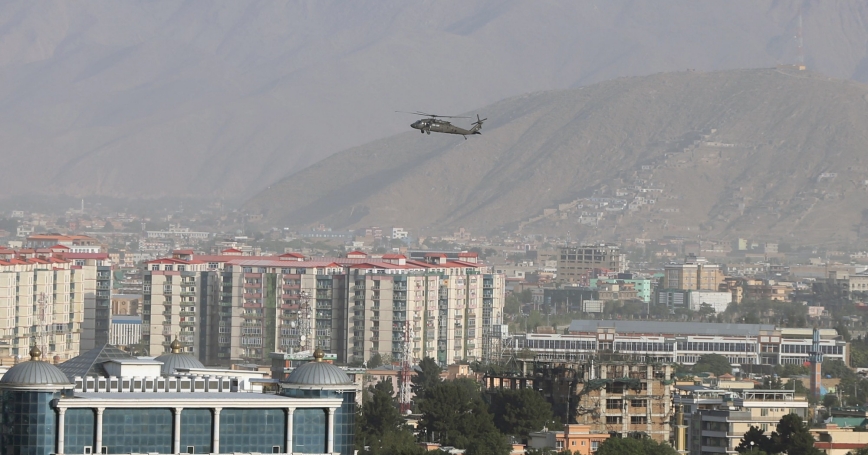 A NATO helicopter flies over the city of Kabul, Afghanistan, June 29, 2020

Sifting through the ashes of America's 20-year intervention in Afghanistan, lessons might be learned by viewing it in a wider context. Afghanistan's fierce, relentless warriors and forbidding geography have defeated a succession of outsiders, including Alexander the Great, the British Empire, and the Soviet Union. While it is tempting to become fixated on comparisons between Afghanistan and Vietnam, especially given the strikingly similar images of people clambering onto aircraft in the fallen capital, there are lessons to be learned from past interventions by other powers. The multiple British wars in Afghanistan are particularly instructive, not only because of their civilization's similarity to the United States but also because of the ebullient overconfidence with which they began.

The British first invaded Afghanistan in 1839, aiming to depose an Afghan ruler who had been dallying with Russia. By replacing him with a more pliant cousin, they would create a British-dominated buffer state between Russian and Indian territory. Not everyone agreed that this was a sound policy: While the Governor-General of British India was enthusiastic, the Duke of Wellington—who had defeated Napoleon—thought an invasion to be risky. The invaders, like their subsequent American counterparts, took Kabul within months and installed a new government. Like so many before and after them, they thought that they had conquered Afghanistan to the point that officers' families were comfortably ensconced in the capital.

For two years, Afghans chafed with resentment against their foreign occupiers, periodically attacking them. Finally, they launched what they described as a jihad against the insulting invaders. A mob indiscriminately slaughtered British officials and soldiers, as well as their wives, children, and servants. An initial attempt to negotiate with the rebel leader resulted in the British negotiators being slaughtered and their bodies dragged through the streets. After weeks of being trapped in a confined camp, British forces negotiated a truce in which they vacated the city in return for an agreement not to attack them during their retreat. Their opponents violated this agreement, repeatedly attacking them as they struggled to cross tough mountain passes in midwinter. Virtually all of the 16,000 personnel who departed were killed, with a fraction captured; only one wounded survivor escaped. The British launched a destructive, vengeful expedition against Kabul, followed by another hasty retreat, but this did little to disguise the magnitude of their defeat and nothing to compensate for vast human losses. The former ruler was restored to power.

The British invaded Afghanistan again 40 years later. After a series of initial victories, they compelled Afghanistan's leaders to cede both substantial territories and control of Afghanistan's foreign affairs. This victory was short-lived: Mutinous Afghans killed the members of the British legation in Kabul, so the British invaded again to install a new leader and achieve the same terms as before. Twenty years later, Afghan forces and their kinsmen in what is now Pakistan again attacked British forces just across the border, though they failed to completely overrun British positions. Afghan forces again crossed the border to attack the British 20 years after that, compelling Britain to relinquish its control of Afghanistan's foreign affairs.

Perhaps the foremost lesson regarding potential intervention in Afghanistan might be a simple one, which could have been learned from the British, Soviet, and many other experiences in that nation: Don't.

In short, over an 80-year period, the British repeatedly waged war against Afghan armies; more than once, they thought that they had conquered the country, only to learn otherwise. They sustained many times more casualties than the United States and its allies (including Britain) have during its own 20-year sojourn in Afghanistan. Some of the reasons for these repeated failures were described by a journalist who became a participant in the next-to-last conflict, a young man named Winston Churchill. His reports from the borderlands contain descriptions that could have been written in the last two decades. Despite his nineteenth-century prejudices, he evinced respect for the inhabitants as “a hardy and martial people, well-armed, brave, and trained by constant war,” noting that “every man is a soldier.” Churchill assessed that their ferocity was unbounded—“Every man's hand is against the other, and all against the stranger”—and easily inflamed by religious fervor. He also ominously noted their ability to effectively use the formidable terrain and the de facto fortifications of their villages, including with the latest weapons of that time. Churchill perceived that as for U.S. and allied forces a century later, both logistical support and medical evacuation created great vulnerabilities: The enemy could easily target movements through the mountainous terrain from elevated vantage points.

The U.S. and allied intervention in Afghanistan, like the British interventions of 1839–1919, is now history. Having seemed to conquer Afghanistan within months, the United States failed to do so over decades. Angry, vengeful men, seething with religious ardor, have destroyed attempts to create a moderate government and to liberate women from the status of property (a status that Churchill also observed). Thousands of American, allied, and Afghan deaths later, all apparently have been lost. The lessons of this 20-year debacle will undoubtedly be debated for decades, as those from the Vietnam War have been. However, perhaps the foremost lesson regarding potential intervention in Afghanistan might be a simple one, which could have been learned from the British, Soviet, and many other experiences in that nation: Don't.

This commentary originally appeared on RealClearDefense on September 2, 2021. Commentary gives RAND researchers a platform to convey insights based on their professional expertise and often on their peer-reviewed research and analysis.