Reinforcing U.S. Deterrence in the Indo-Pacific After the Fall of Afghanistan 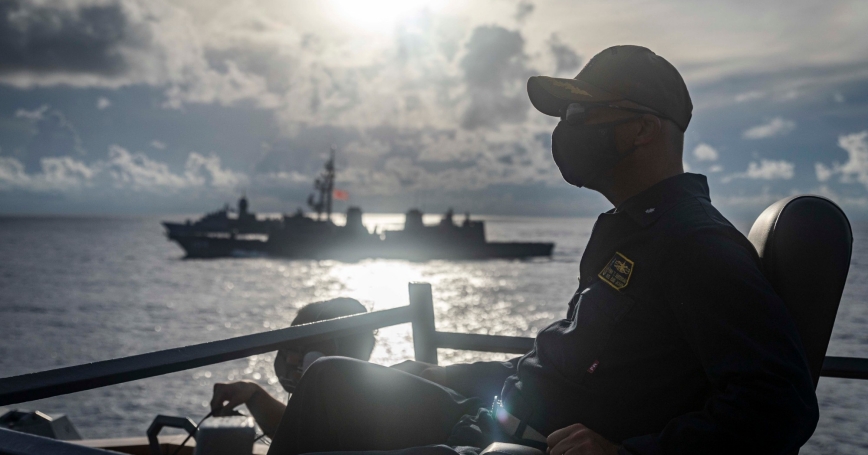 U.S. prestige suffered a grievous blow when the Afghan National Government collapsed despite 20 years of efforts to build up the country's military and democratic institutions. For many, the situation recalls the fall of Saigon in 1975, with U.S. forces even having to assist in the evacuation of its allies' embassies and terrified civilians clambering to get aboard flights out of Kabul.

U.S. adversaries like China and North Korea are already seizing on this development to press their own political warfare messages. Both want to shake the confidence of U.S. allies and partners by claiming that when the chips are down, Washington won't show up. Fortunately, neither Taiwan nor the Republic of Korea—the two countries most exposed to the threat of conquest by a hostile communist adversary—remotely resemble Afghanistan. But Washington could still benefit from efforts to shore up its deterrence credibility in the Indo-Pacific.

China and North Korea want to shake the confidence of U.S. allies and partners by claiming that when the chips are down, Washington won't show up.

To start, the strategic logic of the U.S. withdrawal could helpfully be regularly and consistently reiterated. President Biden's remarks made clear that reducing an expensive commitment to Afghanistan better prepares the United States to defend its core alliances and interests elsewhere, including Asia. Asia was regarded by the Obama, Trump, and Biden administrations as the world's political and economic center of gravity, and the Indo-Pacific was designated as the military's ​priority theater (PDF). The Biden administration's March 2021 Interim National Security Strategic Guidance (PDF) identified a key priority was promoting a “favorable distribution of power to deter and prevent adversaries from threatening the United States and our allies,” with the Indo-Pacific the foremost regional focus. The U.S. national security team could regularly and consistently reemphasize this commitment to Taiwan, South Korea, and America's other allies in the region.

To counter the narrative being pushed by Beijing and Pyongyang, U.S. diplomats and intelligence agencies could highlight how, even during the darkest moments of the collapse of the Afghan National Government, the United States military still sought to assist Afghans fleeing the Taliban. By contrast, China held meetings with the Taliban leadership in late July to lay the groundwork for maintaining its mining operations in Afghanistan and to ensure that the Taliban wouldn't interfere in China's efforts to continue perpetrating genocide against the millions of Uyghur Muslims, including those it has penned up in concentration camps in Xinjiang.

The U.S. could also announce targeted steps aimed at improving deterrence. One possible move could be accelerated development and deployment of a more resilient command, control, communications, computers, information, surveillance, and reconnaissance (C4ISR) architecture such as the Joint, All-Domain Command and Control (PDF) concept. Another could be publicizing the procurement and prepositioning of a deeper and more diverse stockpile of long-range, anti-ship cruise missiles and other precision-guided munitions (PDF), including the U.S. Army's new Common-Hypersonic Glide Body munition. Such weapons could hold at risk the ships and strike platforms China would use to threaten or invade Taiwan while remaining at a distance where the PLA would struggle to target them.

The Department of Defense could choose to accelerate the development and deployment of large numbers of unmanned platforms of a variety of sizes, roles and missions that would allow commanders to accept greater risk and operate in increasingly contested areas, as the Marines' Expeditionary Advanced Basing Operations (PDF) concept has called for. Additional resources could be used to reduce the strain on the Navy by funding more training and maintenance, which would improve readiness, operational efficiency, and ultimately deterrence.

Asian partners will be looking for signals that the United States is invested in a long-term competition with China.

In addition to seeking short-term confidence boosts about American military deterrence, Asian partners will be looking for signals that the United States is invested in a long-term competition with China. To that end, Washington could accelerate influence-boosting initiatives such as the Build Back Better World partnership, providing vaccine assistance to Southeast Asia, or promoting reliable 5G solutions with allies like Japan to counter untrustworthy Chinese information and communication technology providers.

Finally, Washington could consider the importance of being perceived to be keeping faith with those who partnered with the United States. The Biden administration could consider accelerating and expanding its existing efforts to help Afghans escape the Taliban and resettle in the United States or elsewhere. Since the end of the Vietnam War, over 1.6 million Vietnamese have moved to the United States, taking on citizenship, building families and businesses, and representing an important connection between the United States and Asia. Afghans who come to the United States will similarly bring with them skills, values and connections that could make America stronger. While screening will likely be important, calls to reject such refugees out of fear that they will be involved in terrorism could unduly stigmatize this vulnerable community.

The disaster of Afghanistan's second fall to the Taliban will not soon be erased. An important objective now may be to help those remaining in Afghanistan get out and mitigate the impact of the Taliban takeover on America's interests in the Indo-Pacific.

This commentary originally appeared on RealClearDefense on September 1, 2021. Commentary gives RAND researchers a platform to convey insights based on their professional expertise and often on their peer-reviewed research and analysis.