Afghan Refugees Are Being Recruited to Join an Iranian Paramilitary 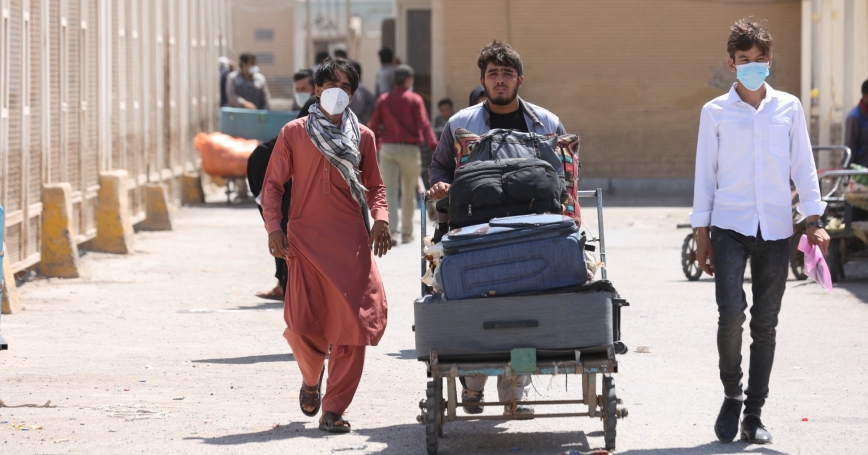 As hundreds of thousands of Afghans flee their homeland following the Taliban's victory, the United States and international community face an under-appreciated challenge: Some of these refugees could be recruited into state militaries and paramilitaries. As Western policymakers consider how to deal with Afghan evacuees, including former members of the Afghan security forces, they might consider how to prevent adversaries such as Iran from recruiting Afghan refugees for dangerous and destabilizing operations.

Recently, Iran has recruited thousands of Afghans into its Liwa Fatemiyoun, which it has used as “cannon fodder (PDF)” in the war in Syria. But the recruitment of refugees into paramilitaries is not a new phenomenon, and its recurrence may point to its attractiveness to governments.

During the Cold War, the United States recruited Cuban refugees for the Bay of Pigs operation and the British recruited heavily from exile communities during World War II. Research shows that states tend to recruit “legionnaires”—foreign-born individuals—into their military forces when they face recruitment challenges and external threats. An increasing supply of refugees may make recruitment even more attractive, especially if potential recruits have few other options. The United Nations estimates that up to a half-million Afghans may flee into neighboring countries and join over 2.6 million existing Afghan refugees.

Recruitment into paramilitaries—forces that are not formally a part of the state's military—comes with added benefits and risks to states. Paramilitaries will not face the same need for accountability as regular units, nor will they likely be provided with the same long-term benefits provided to regular military veterans. The availability of refugee-staffed paramilitary groups also could make covert action more attractive, since the citizens of the sponsoring state do not bear the costs of an operation. While paramilitary groups may face recruitment challenges given the costs and risks, refugees may be easier targets.

One proposal—the British Army recruiting Afghan commandos in a capacity like that of the Gurkhas—offers an example of a positive approach. The United States also reportedly evacuated partners who were aligned with the former regime and these individuals could be recruited by the U.S. military as well. Well-trained, experienced Afghan military personnel who long have collaborated with coalition militaries could contribute a great deal, assuming they are properly vetted, receive necessary benefits, and have a real choice about their recruitment options.

The recruitment of former Afghans outside of Western militaries should give policymakers pause. Turkey could enlist Afghan arrivals into proxies emulating its recruitment of displaced Syrians into forces that have deployed to fight in Syria, the Libyan civil war, and in the 2020 Nagorno-Karabakh War. One also can imagine a future hypothetical mission mirroring the Bay of Pigs approach in which Afghan evacuees are recruited to return to Afghanistan. Such a mission might draw on former members of special units outside the mainline Afghan forces. For example, the New York Times reported that a unit from the National Defense Service, Afghanistan's intelligence service, was reportedly present at Kabul's airport and was evacuated. Returning such forces to Afghanistan could seem like an easy option in the future but could pose unanticipated risks to both the forces returning and stability in the region.

Undoubtedly the greater threat to national security comes from the recruitment of Afghans by Iran. Since at least 2012, Iran has recruited Afghan adults and children into the Liwa Fatemiyoun, which supports Bashar al-Assad's forces (PDF) in Syria's civil war. Of its estimated 50,000 Afghan fighters, approximately 5,000 were killed and another 4,000 injured during the war. In 2017, Iran declared victory over Islamic State and ceased recruitment for the Liwa Fatemiyoun, but it could change course and expand operations in Syria or beyond.

Iran has taken advantage of vulnerable Afghans by offering a path to permanent residency. This is a powerful incentive as Iran and other countries repatriated Afghan refugees in recent years.

Prior to the fall of Kabul to the Taliban, Iranian officials indicated the group could be used in Afghanistan, especially in the context of fighting Islamic State Khorasan (ISIS-K). If relations between Iran and the Taliban deteriorate, Tehran may try using the Liwa Fatemiyoun as a force inside Afghanistan. One possible trigger for this action could be violence targeting Afghanistan's Hazara population, a Shia minority. Iran has taken advantage of vulnerable Afghans by offering a path to permanent residency. This is a powerful incentive as Iran and other countries repatriated Afghan refugees in recent years.

Further study of the issue is particularly important since it is unclear what tools can be used to stop state-sponsored refugee recruitment. Additional sanctions are unlikely to persuade Iranian stakeholders—Washington already has enacted broad sanctions on Tehran and designated (PDF) the Iranian Revolutionary Guard Corps as a Foreign Terrorist Organization. An improved humanitarian response, inside and outside of Afghanistan, could make recruitment incentives less enticing. There also could be information campaigns to warn refugees of the risks of recruitment.

While refugee recruitment may seem a less-immediate concern than other humanitarian challenges, it could be an important and under-appreciated component of threats to displaced peoples. The possibility of having refugees flee conflicts in their home countries, only to be recruited by another state to fight in a different war, could be counterproductive. Greater attention to these risks may become increasingly important as refugee flows from Afghanistan continue.

Erik E. Mueller is a defense analyst and Andrew Radin is a political scientist at the nonprofit, nonpartisan RAND Corporation.

This commentary originally appeared on The Hill on November 23, 2021. Commentary gives RAND researchers a platform to convey insights based on their professional expertise and often on their peer-reviewed research and analysis.