On Veterans Day, There Are Still Thousands of Homeless Vets in L.A. We Followed 26 to Find Out Why 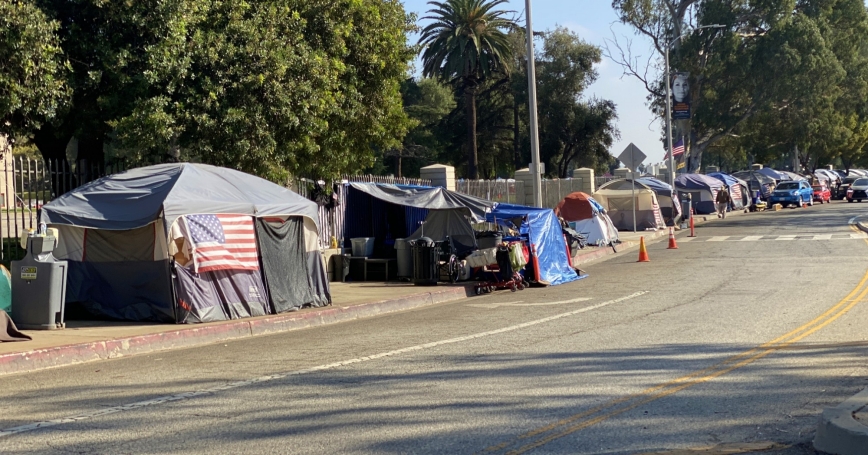 Veterans experiencing homelessness outside the VA grounds in an undated photo in Brentwood, California

When the encampment dubbed Veterans Row was emptied last week, dozens of tents, tarps, and flags disappeared from San Vicente Boulevard. But moving 40 or so people onto the West Los Angeles Veterans Affairs campus is a minimal step forward: An estimated 3,900 veterans live unhoused in Los Angeles.

That number, which has remained essentially unchanged since 2015, makes L.A. the epicenter of unsheltered veterans in the United States. It remains the case after years of promises—such as Mayor Eric Garcetti's 2014 pledge to end veteran homelessness or the 2016 master plan (PDF) to create 1,200 supportive housing units on the VA grounds, which is 95% incomplete and might not be done until 2031.

Other regions haven't stalled so badly. Nationwide, the population of veterans experiencing homelessness was cut nearly in half (PDF) between 2009 and 2019. Three states—Connecticut, Delaware, and Maryland—and 82 communities report having functionally eliminated the problem, meaning a permanent housing solution is typically available for veterans within 90 days.

Admittedly, none of those places are confronting the acute, widespread homelessness that plagues Los Angeles. Still, the city has the largest VA medical center in the nation. There are federal housing programs exclusively for veterans. So why hasn't Los Angeles been able to make a dent?

To find out, I led a group of researchers who followed 26 unsheltered veterans starting in August 2019. We interviewed them monthly for a year to see what was barring vets from getting a permanent place to live.

Securing housing was the stated top priority for the majority in our study—so the problem was not that veterans chose homelessness. Some made contact with programs meant to help them, but permanent housing didn't materialize.

Richard, who'd been a jet mechanic in the Air Force, was 56 and living next to the West L.A. VA campus gate when we met him. “Every time someone says they can do it, they don't.…So, I just don't even get my hopes up for it,” he told us. Others said they were “done fighting the system” or thought it would take “a miracle.”

Only three of the 26 vets we followed obtained permanent housing during the next 12 months. Nine never made it indoors for more than two weeks. Fifteen got installed in temporary housing at some point, including five in hotel rooms through Project Roomkey, an emergency pandemic program.

It was clear that VA outreach programs fell short. The men and women we recruited for our study all were within walking distance or a short bus ride of the VA in West L.A., but two-thirds were getting assistance from non-VA service providers or no help at all. While the VA operates a Welcome Center on campus and holds events around the county, the veterans we spoke to said those programs don't provide a clear pathway to housing.

When our study began, the VA's homeless outreach team consisted of five individuals responsible not just for all of Los Angeles County, but also parts of adjacent counties. They had no medical or behavioral health expertise. They carried no mobile technology that could, for example, confirm a person's status as a veteran. Nonprofit-led outreach teams were far more numerous, but they weren't connecting veterans to VA services.

The kind of housing offered was sometimes a stumbling block. Some veterans turned down shelter that they deemed unsafe or that couldn't accommodate their families. Others ran afoul of rules—such as curfews or sobriety—and cycled back onto the streets. One missed curfew at a Project Roomkey hotel after our study concluded; she wound up back on the streets living in a van.

Pushing veterans to address mental health, employment, or substance use problems before they get permanent housing is counter to the VA's stated “housing first” philosophy. Yet one vet living in his car said that after a drug-use relapse he was kicked out of a residential treatment program on the VA campus. Other veterans complained of being told “to put in more effort” to qualify for something permanent.

It's easy to think that anyone living in a vehicle or tent would accept whatever housing is offered, but it is rarely so simple. Shandra's spouse had immigrated illegally; they were wary of shelters demanding a lot of information. Ralph, a Navy veteran who was 51, preferred staying near a library in Hollywood to a short-term housing program on skid row, in part because of his PTSD. “The noise level, the energy level, the constant law enforcement, paramedics, helicopters—that's just too overwhelming for me,” he said. “They should not be housing veterans in skid row.”

L.A.'s shortage of affordable apartments made the VA's rent vouchers difficult to use in the private housing market. Reggie, an Army veteran, was 48 and homeless for the first time when we met him. He got a voucher but couldn't find a landlord who'd accept it within the 120-day time limit. His voucher expired.

The VA and other organizations do little to identify vulnerable veterans, they don't effectively follow through or cross coordinate, and they have too little housing to offer.

In a recent survey, 87% of American adults said more should be done to support U.S. veterans. A similar percentage said they'd pay additional taxes to make it happen. Local passage of Proposition HHH and Measure H also reflect the depth of this sentiment. Moreover, Gov. Gavin Newsom plans to invest $7.3 billion (PDF) in the next year to address the state's homelessness crisis.

So the core problem today is not a shortfall of money or public will. It's that the VA and other organizations do little to identify vulnerable veterans, they don't effectively follow through or cross coordinate, and they have too little housing to offer. In the end, veterans become indistinguishable from the tens of thousands of other unsheltered individuals in the county, and no one is held accountable for their care.

Last month, as plans were made to dismantle Veterans Row, U.S. Veterans Affairs Secretary Denis McDonough pledged to house 500 more of L.A.'s unsheltered veterans by the end of this year. Let's hope he succeeds. But even if he does, there will still be more than 3,000 local veterans waiting for a home.

Sarah B. Hunter is a senior behavioral scientist at the nonpartisan RAND Corporation, and director of its Center on Housing and Homelessness in Los Angeles.

This commentary originally appeared on Los Angeles Times on November 11, 2021. Commentary gives RAND researchers a platform to convey insights based on their professional expertise and often on their peer-reviewed research and analysis.