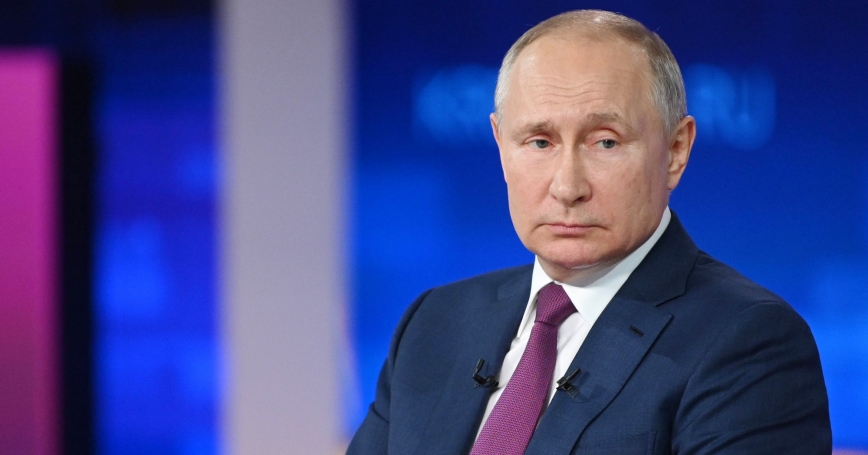 Russian President Putin may believe the time is right to invade Ukraine if NATO refuses to meet his demands. Reports indicate that he sees the Biden administration as weak after the pullout from Afghanistan, and in 2014, Russia felt sufficiently confident of success to annex Crimea and impose unappealing terms (PDF) on Ukraine. Massing 170,000 troops on Ukraine's border is excessive for a diplomatic signal and represents an offensive threat. How can he be deterred?

Mr. Putin may be looking for an opportunity to re-establish Russia's sphere of influence. Mr. Putin views the breakup of the USSR as a catastrophe of historic proportions. In Putin's eyes, retaking Ukraine would also cement his legacy as a strong president who reversed Russia's decline and restored its geopolitical standing. None of the current or proposed NATO ground forces in Europe pose a credible threat to Russia.

Positions on what the United States and its European allies should do range from encouraging Ukraine to quickly implement unpalatable aspects of the Minsk Protocol, carefully “threading the needle” to signal commitment without causing provocation, and revitalizing efforts to arm Ukraine. Secretary of State Antony Blinken is reported to have said that, “Diplomacy is the only responsible way to resolve this potential crisis.” To the extent that he means that a headlong rush to conflict with Russia is unwise, and that diplomacy during times of potential conflict includes the threat of military consequences, we agree.

If Russia were to invade Ukraine, install a friendly government, and establish a buffer state, this would alter the strategic balance in Europe far beyond the annexation of Crimea.

However, if Russia were to invade Ukraine, install a friendly government, and establish a buffer state, this would alter the strategic balance in Europe far beyond the annexation of Crimea. With its southern front secure and Belarus firmly within Russia's sphere, Russian forces could present a direct threat to Poland and isolate the Baltic states. This could potentially even be the start of a new cold war. It could also substantially detract from the United States' ability to manage competition with China.

In keeping with the need for specificity when developing concepts for deterrence, NATO could adopt a dual-track strategy to preserve Ukraine's independent status and deter a new war in Europe. As Henry Kissinger suggested in 2014, the United States could reject extending NATO membership but insist Ukraine be free to govern itself without coercion. NATO and the EU could clearly specify the economic costs of Russian aggression, including a strategy to eliminate European dependence on Russian natural gas. The United States could state its intention to provide weapons to Ukraine and support long-term resistance to Russian occupation if necessary.

Renewed Russian aggression could also pose grave dangers for Europe, not just Ukraine. Given Russian preparations to coerce or invade Ukraine and concerns it may do the same in the Baltics, NATO still has time to recognize the Russian threat, agree to a new defense strategy, reverse the decline in defense budgets, develop a general defense plan and the forces to implement it, restore training and readiness, and improve its posture or risk a rapid fait accompli in Poland and the Baltic States.

The United States can lead the alliance but cannot meet this challenge without its European allies. The 30-30-30-30 Plan championed by then-Secretary Mattis and agreed by NATO may no longer be sufficient. For its part, the U.S. Army could deploy a robust V Corps headquarters capable of commanding a joint task force and an armored division to Poland along with fires and logistics support. Likewise, Britain, France, and Germany could raise, equip, and prepare more forces than one brigade each in 30 days.

The worst outcome for Putin short of war would be a revitalized NATO, led by capable U.S. forces on or near Russia's borders.

Russia is opportunistic but lacks the power of the Soviet Union. Putin does not want to galvanize NATO, sparking a cold war that will add significant pressure to the Russian economy. The worst outcome for Putin short of war would be a revitalized NATO, led by capable U.S. forces on or near Russia's borders. Action now to make clear that this will happen if he does not change course could constitute tailored deterrence. Some capability improvements may be needed regardless of future Russian actions (e.g., deploying a capable Corps headquarter to Poland, revitalizing European NATO defense budgets and capabilities) whereas other steps could be contingent on Russian behavior (e.g., moving heavy U.S. ground forces and additional air assets to Europe).

After having gone years without a significant threat from Russia, NATO leaders and legislatures now may be recognizing that the security environment has changed and that the more comfortable political status quo is gone. But if NATO were to decide to stand firmly together, conflict in Europe may be deterred and strategic stability restored.

Terrence Kelly is vice president and director of the RAND Homeland Security Research Division. Timothy M. Bonds is a senior fellow and Michael Johnson is a defense research analyst at the nonprofit, nonpartisan RAND Corporation.