In order to defend itself and its national interests, and to maintain the trust of allies as a reliable security guarantor, the United States must match its national security policies with the resources available to support them. This report discusses the specific gaps between the stated strategic and defense policies of the United States and the resources and capabilities that would be required to implement those policies successfully. 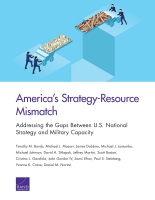 Addressing the Gaps Between U.S. National Strategy and Military Capacity

Significant gaps exist in the ability of the United States and its allies to deter or defeat aggression that could threaten national interests. For example, NATO members Estonia, Latvia, and Lithuania remain vulnerable to Russian invasion. South Korea is vulnerable to North Korea's artillery. China's neighbors — especially Taiwan — are vulnerable to coercion and aggression. Violent extremists continue to pose a threat in the Middle East. Solutions to these problems will take both money and time. In this report, RAND researchers analyze the specific technological, doctrinal, and budgetary gaps between the stated strategic and defense policies of the United States and the resources and capabilities that would be required to implement those policies successfully.

Absent a change in administration policy or a new political consensus in favor of a defense buildup, there will not be enough resources to close the gap between stated U.S. aims and the military capabilities needed to achieve them. This leaves the Trump administration and this Congress with some difficult choices. The United States could decide to focus primarily on its own security, devoting to allies and partners only those forces and capabilities that could be easily spared. At the other end of the spectrum, the Trump administration could take the central role in defending U.S. allies against aggression by Russia, China, and other potential adversaries. The hard-to-find middle ground would be to provide the military with sufficient capabilities to ensure that aggression that imperils U.S. interests in critical regions would fail while helping allies build the capacity to do more for their own and the collective defense.