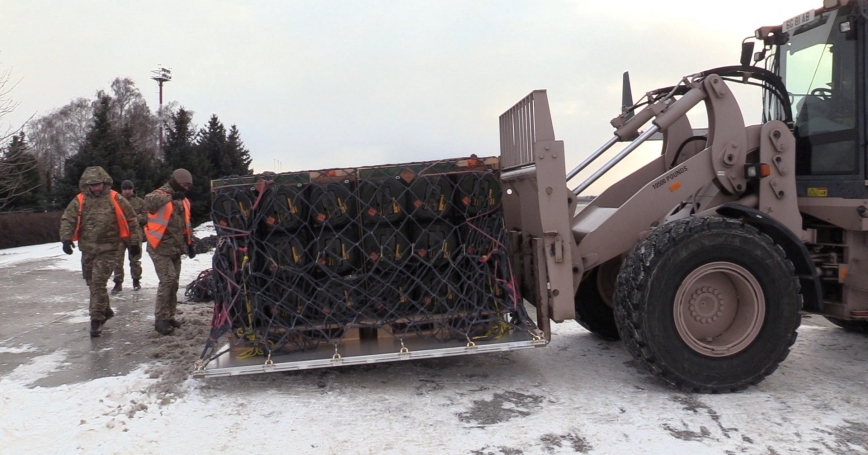 Much of the Western discussion about helping Ukraine in the face of overwhelming Russian military advantage centers on relatively short-range weapons and tactics meant to enmesh an invasion force in the “next Afghanistan” or a “near certainty of hell”: for example, providing more Javelin anti-tank weapons, Stinger anti-aircraft missiles, and weaponized drones; or training Ukrainian forces and Ukrainian nonstate groups to make improvised explosive devices. While such courses of action would impose costs, they would impose them on Russian and Russian proxy forces' ground troops. These approaches do not consider the decisive role that Russian air and standoff missile strikes may play. If the Kremlin orders a large-scale move on Ukraine, it is likely to take the form of a multidomain operation, beginning with air and standoff missile strikes that could prove decisive—and devastating—long before short-range defenses come into play.

A better approach starts with looking at the Russian military's current strategy and doctrine, the forces it has amassed nearby, and the capabilities it has shown in recent conflicts. Many Russian concepts of operation (PDF) emphasize a short and intense “Initial Period of War” that may produce decisive effects even before ground forces are fully committed. Standoff weapons—bombs, precision-guided missiles—are unleashed against enemy forces and the infrastructure that sustains the fight: military bases, forward-deployed units, air defense sites, airfields, key transportation nodes, fuel depots, command-and-control targets, power plants, even local news organizations. The aim is to force the enemy government to capitulate quickly.

A large-scale Russian operation against Ukraine would likely be different from previous post-Soviet operations for several reasons. The Russian military has spent the past decade refining doctrine, reorganizing its forces, and updating its arsenal. It no longer relies on large numbers of poorly trained conscripts and ill-equipped ground forces as it did in Chechnya. Its modernization program was designed to avoid the kind of disorganized, stove-piped, ground-force dominant operation seen in Georgia in 2008. Even its “hybrid” incursions into the Donbass and Crimea in 2014 may be only partially illustrative at best.

The Russian military has spent the past decade refining doctrine, reorganizing its forces, and updating its arsenal.

The most illuminating illustration of current Russian tactics is probably its overt operations in Syria. But that expeditionary force was much smaller, designed only to support what Moscow claims is a counterinsurgency and counterterrorism operation. At their peak, Russian forces in Syria were only a small fraction of the strike power that is permanently based and temporarily deployed near Ukraine today.

The modernized and massive Russian military force that currently surrounds Ukraine on three sides can muster air and missile strikes that would likely overwhelm Ukrainian airpower and air defenses and severely damage military and other facilities. In particular, Russia's Aerospace Forces, or VKS, are very different from a decade ago. They have new and modernized aircraft, along with better radar, communications, and targeting equipment. Pilots have generally flown more flight hours and received training in close air support and nighttime operations. And although they have little experience flying through hostile air defenses, 92 percent of VKS pilots have recent combat experience in Syria. The VKS also has adopted (PDF) more-effective countermeasures against man-portable or short-range air defenses such as Stinger missiles, including flying at higher altitudes.

Russia also fields standoff precision strike missiles that could strike any Ukrainian location from well inside Russian territory or the Black Sea. Weapons like the SS-26 short-range ballistic missile system, with a range of 250 to 350 kilometers, are already likely staging near Ukraine. Russia can strike from even farther away using the SSC-7 ground-launched cruise missile (400 to 500 km), the naval SS-N-30A Kalibr land-attack cruise missile (1,500-plus km), or the strategic bomber-launched Kh-555 or Kh-101 cruise missile (2,000 to 4,000 km).

Against this strike force, Ukraine can muster only Air Force and air defense systems that are limited in number, date to the Soviet era, and are based at a small number of facilities. Russian air or missile strikes could quickly render them combat-ineffective, even if they were not outright destroyed.

The VKS' own integrated air defense systems would accompany Russian troops on the ground to protect them with short, intermediate, and long-range air defense systems. Russia could also move its advanced SA-21 system to certain border areas to complicate eastern Ukrainian airspace, to stop or degrade Western weapons transfers. For example, SA-21 systems equipped with the new 40N6 interceptor missile can hit targets out to 400 km—and the distance between Kyiv and the Russian border near the Kursk area is around 300 km. Such a deployment would threaten military and civilian aircraft operating out of large areas of eastern Ukraine and the Black Sea from Crimea.

It is highly unlikely that Kyiv's supporters can provide enough materiel support to bridge the gap between Ukrainian and Russian military capabilities in a way that will deter Russian aggression in the near or intermediate term. Russia's correlation of forces is simply too strong and Russian military assets can simply overfly or outrange many tactical or short-range weapons like Stingers or Javelin systems by using modernized air power and standoff precision strikes, or outrange them on the ground with long-range artillery. Nevertheless, there are near-term options left to support Kyiv and reduce the impact of these strikes to save lives and forces.

It is highly unlikely that Kyiv's supporters can provide enough materiel support to bridge the gap between Ukrainian and Russian military capabilities in a way that will deter Russian aggression in the near or intermediate term.

In the weeks ahead, Kyiv's partners could help the Ukrainian military and government “ride out” air and missile strikes as best they can by consulting on dispersal plans for Ukrainian air defenses (as U.S. teams recently did) or hardening plans for other critical facilities, since these locations will almost certainly be primary and early targets for Russian strikes. Ukraine's partners might share knowledge about Russian targeting strategy to assist Ukraine in building fortifications or establishing redundancy plans for critical command-and-control centers or military units, or detecting Russian cyber attacks or intrusions. Finally, Ukraine's supporters could share real-time intelligence on Russian flight operations or missile launches. Such information could be vital when minutes count for dispersal and survival.

Finally, efforts should also be stepped up to provide short- and intermediate-range air defense systems. Indeed, Ukraine has asked for help in air defense and has already started fortifying critical facilities from air attacks, which suggests a correct understanding of Russian targeting and strategy. And the United States and other allies and partners have already begun discussing providing Patriot and Israeli Iron Dome systems, both of which would be of far more use than easily overflown man-portable missiles. These would be purely defensive air-defense systems and Moscow would be hard-pressed to argue they are destabilizing to the region. But this kind of assistance should not be counted upon in the very near term. Such systems would likely take months at best to approve, deploy, create infrastructure, and train local forces to use.

A Russian large-scale multidomain operation would be devastating for the Ukrainian military and people, and Ukraine should work to prevent that. But steps can also be taken to reduce the effects of the air and missile strikes that would likely lead off such an operation. Kyiv and its supporters must urgently take such steps.

Dara Massicot is a senior policy researcher at the nonprofit, nonpartisan RAND Corporation and a former senior analyst for the Department of Defense focusing on Russian military capabilities and strategy.

This commentary originally appeared on Defense One on January 19, 2022. Commentary gives RAND researchers a platform to convey insights based on their professional expertise and often on their peer-reviewed research and analysis.