A Test of How Effective Sanctions Are 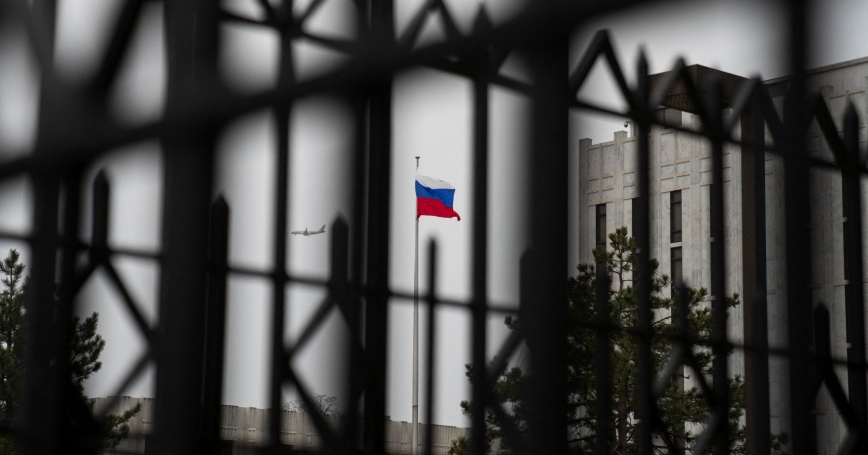 The Russian flag flies above the Embassy of the Russian Federation, Washington, D.C., February 22, 2022

U.S. President Joe Biden's threatened sanctions far exceed previous measures to curb Russian President Vladimir Putin, but they have not stopped Putin from ordering Russian forces into rebel-held territory in Eastern Ukraine. This begs the question whether the severe measures the United States, the United Kingdom, and the European Union have threatened to take are enough of a redline to stop Putin from going further. In the current era of great power competition, economic sanctions as instruments of statecraft face the ultimate test.…

The severe sanctions the U.S. has threatened to impose if Russian forces attack Ukraine seem to have caused Putin to advance cautiously in his attempt to colonize that country, but they have not deterred him. After Russia annexed Crimea and invaded Eastern Ukraine in 2014, the U.S. and its European allies imposed a series of sanctions to counter Russia's malicious behavior around the globe.

The sanctions the U.S. imposed in 2014 targeting key people and institutions aligned with Putin were designed to inflict a minimum of collateral damage (PDF) on the Russian population. These measures hurt the Russian economy over time. But whatever damage they inflicted was not near enough to stop Putin from interfering in the elections (PDF) of other countries or attempting to kill regime opponents.

Thus far, sanctions have not restrained Putin's ambitions to remake the map of Europe.

Following the U.S. Intelligence Community's assessment (PDF) that Russia interfered in the 2016 U.S. presidential election, Congress passed—with near unanimous bipartisan support—the Countering America's Adversaries Sanctions Action (CAATSA), which was designed to threaten sanctions on third countries if they purchased Russian advanced conventional weapons, and to deny Russia revenue from the sales. As noted in a RAND report, third-party sanctions can complicate U.S. bilateral relations with other countries. They only indirectly hurt Russia, and in ways that are hard to measure. Sovereign nations resist being told from whom they can buy weapons to defend their country. Additionally, a country like India that the U.S. seeks as a partner to counter China's Indo-Pacific region ambitions has purchased Soviet and Russian weapons for decades. It cannot easily switch to French or American weaponry.

More sanctions were applied following the revelations that Russia used Novichok, a chemical warfare agent, to poison a former Russian military official and his daughter in 2018. Seemingly undeterred, Russian intelligence attempted to kill opposition leader Alexei Navalny, also with Novichok, in March 2021. In response, the U.S. government added Russia to the International Trade in Arms Regulations (ITAR) list of proscribed countries, thus prohibiting any trade of defense products, services, or technical data with Russian firms or Russian citizens. While American defense companies export very little to Russia, the restriction could affect some aerospace and satellite companies. Adding Russia to the list of proscribed countries would prohibit these companies from employing any Russian citizen or dual-nationals.

Thus far, sanctions have not restrained Putin's ambitions to remake the map of Europe. He has attempted to make Russia “sanctions-proof” by accumulating significant hard currency reserves, building up domestic industries to substitute for key imported products, and appealing to Russian nationalism by claiming Ukrainian territory as historical Russian territory. To stop Putin from ordering Russian forces to overrun all of Ukraine, the U.S. and allied nations actions will have to be swift and punishing.

One of the measures the Biden administration is reportedly considering is the foreign direct product rule, which would prohibit U.S. companies from exporting specific products to Russia. These include smart phones, automobile components or semiconductors. Blocking U.S. semiconductors sales and other electronic items would severely affect Russia's technology sector.

Another option is to prevent Russia's largest banks, which are well integrated into the international financial system, from being able to convert rubles into dollars. Blocking sanctions would prevent Russian banks from doing any business outside of Russia. Russian companies would not be able to buy foreign goods exchanged in dollars.

The energy sector is hugely important to Russia’s economy and accounts for more than 40 percent of its federal government budget. However, suspension of Russian energy supplies to Europe would have significant implications for both Europe and Russia—they are mutually dependent. Biden and German Chancellor Olaf Schöltz threatened to block the completion of the Nord Stream 2 gas pipeline. This suggests that Germany and the U.S. are willing to take a tough stand.

Sanctions that affect key Russian economic sectors—like energy, finance, and advanced manufacturing—will have implications for Russia, but also for America’s European allies and some American companies. The question will be who experiences the greatest economic pain, and how long can they endure it. Thus far, the uncertainties associated with the threatened prospect of more severe sanctions have at least added a complication that Putin must consider.

Putin is risking the current comparatively stable European security structure to claim territory that does not want to be claimed by Russia. The U.S. and its European allies have upped the ante by threatening punishing sanctions. They have in essence drawn a redline. How this crisis plays out will reveal a great deal about whether sanctions as instruments of statecraft can prevent major conflicts between great powers.

John Parachini is a senior international and defense researcher, former director of the RAND Intelligence Policy Center, and a member of the Pardee RAND Graduate School faculty.

This commentary originally appeared on RealClearWorld on February 24, 2022. Commentary gives RAND researchers a platform to convey insights based on their professional expertise and often on their peer-reviewed research and analysis.