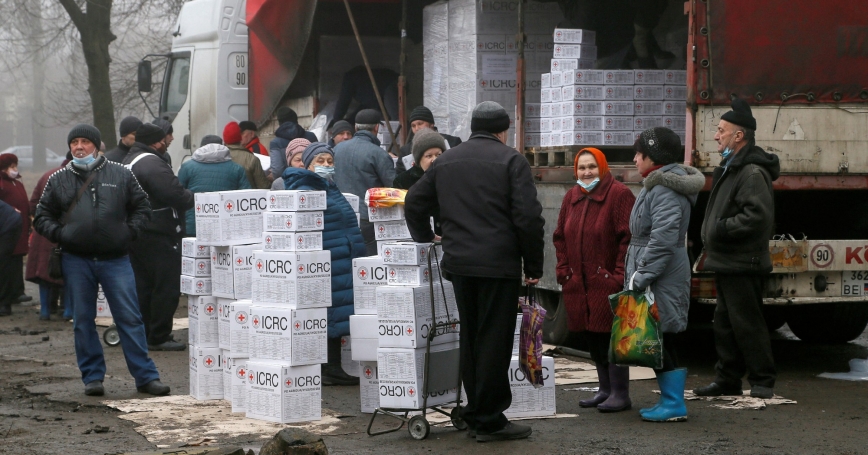 Distribution of humanitarian aid from the International Committee of the Red Cross in Donetsk, Ukraine, March 17, 2021

With Russia now having enough troops and equipment in place to invade Ukraine if diplomacy fails, one fallout of such an invasion could be a massive refugee or migration crisis. If that happened, there would be significant humanitarian, political, and economic implications for both the Ukrainians who flee and for the European nations they go to.

After the Russian incursion into Crimea and Donbas in 2014, 1.5 million Ukrainians were displaced within the country. While few Ukrainians claimed refugee status, neighboring Poland issued some 300,000 temporary residence visas for Ukrainians in recent years, while some put the total numbers of Ukrainians living and working in Poland after these events as high as 2 million.

But the 2014 Crimea/Donbas incursion was geographically isolated in the south and east of the country, areas primarily populated by Russian speakers, many of whom remained in place.

A major Russian incursion in 2022 into the center and west of Ukraine might unfold very differently and result in major population flows, including into neighboring countries, most of which are European Union (EU) member states.

Ukraine is a country of 44 million people. Ukraine's defense minister estimated that a violent invasion could lead 3 to 5 million Ukrainians to flee the battlefields. The U.S. government puts the estimate at between 1 and 5 million refugees. They could seek safety elsewhere in Ukraine or in neighboring countries. This may be all the easier as recent EU policy stipulates that no visa is needed for Ukrainians to enter the Schengen area (Romania is not currently in Schengen but the other bordering EU members Hungary, Slovakia, and Poland are). Ukrainians fleeing the conflict can simply take a bus or drive, most easily to Poland.

It is not a stretch to envision rural towns and cities in western Ukraine and Poland suddenly needing to cope with hundreds of thousands or more people.

Such a massive movement of people, unseen in Europe since World War II, could pose a humanitarian catastrophe and impact European politics as much as or more than the migration crisis of 2015 (when that year alone saw 1.3 million migrants who applied for asylum, seeking to escape wars in the Middle East and hardship in Africa).

It is not a stretch to envision rural towns and cities in western Ukraine and Poland suddenly needing to cope with hundreds of thousands or more people, with attendant health, food, housing, education, security, and other immediate needs.

Neighboring countries, the EU, and NATO member states may want to act to alleviate the crisis. National disaster plans, buttressed for recent climate-related disasters such as river flooding, could be activated. Relief stocks could be moved by road and rail, including into western Ukraine. But the humanitarian challenges could be massive.

The 2015 migrant crisis had significant effects on European politics and illustrated potential political risks. Far-right parties in Germany, Austria, France, and elsewhere blossomed. Polls showed that immigration was the single most important issue for "Leave" voters in the UK's 2016 Brexit referendum, with dramatic refugee flows evident in Europe as a particularly hot issue. While Ukrainian migrants may be viewed by new host communities as more culturally similar than those from other regions of the world, such large new waves of people could pose special challenges at a time of COVID-related economic uncertainty.

In the event of much larger movements of Ukrainians this year, the political impacts could be similar and bolster right-wing and nationalist movements. Since Russian critiques of Ukraine's NATO aspirations may be the casus belli, any backlash to the refugees in communities experiencing migrant flows could further divide NATO members (an effect that would be welcomed in Russia, and perhaps enhanced by disinformation efforts).

Any backlash to the refugees in communities experiencing migrant flows could further divide NATO members.

One way of mitigating some of these risks and improving conditions for Ukrainians who flee would be considering them as an economic asset. Our RAND study of refugees in the Middle East found how important enabling refugees to work is for improving their self-sufficiency and dignity. The EU could take a strategic approach to valuing their skills and contributions, matching them to communities with labor market shortages, such as several eastern European countries. The EU could develop a system of medium-term residence or work visas for the Ukrainians, along the lines of Poland's approach with the earlier wave of Ukrainians or Colombia's approach with the Venezuelans.

Regardless of mitigation steps, millions of Ukrainians would likely be a permanent presence in their new host countries. Our recent RAND study found that the vast majority of refugees do not return home. We found that 10 years after a conflict's end, less than a third of refugees return. This has contributed to some 82 million forcibly displaced people globally (both refugees and those internally displaced), a number that has doubled in the past decade.

A risk of millions of displaced people inside Europe, the likes of which has not been seen since World War II, could present yet one more reason to make sure that a Russian invasion of Ukraine does not happen.

Shelly Culbertson is a senior policy researcher at the nonprofit, nonpartisan RAND Corporation. Ambassador Charles Ries is an adjunct senior fellow at RAND.

This commentary originally appeared on Newsweek on February 16, 2022. Commentary gives RAND researchers a platform to convey insights based on their professional expertise and often on their peer-reviewed research and analysis.