Keeping Russians Informed About Ukraine Could Help End This War 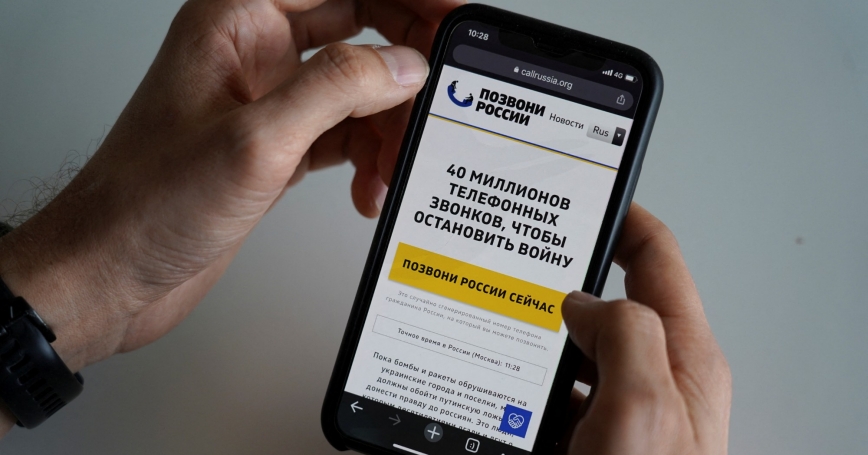 An application that helps Lithuanians to call Russians to discuss the war in Ukraine in an effort to help end the war, in Vilnius, Lithuania, March 9, 2022

“Light will win over darkness.” President Volodymyr Zelensky of Ukraine spoke these words in his stirring address to the United Nations, and U.S. President Joe Biden cited these same remarks during his State of the Union address in emphasizing U.S. support for Ukraine.

Russian President Vladimir Putin, on the other hand, is placing his bets on darkness. He is shielding his people from what is actually happening in Ukraine, the casualties inflicted by the Ukrainian Army, the mayhem unleashed by Russia on Ukrainian civilian centers, and the West's rationale for inflicting damaging sanctions. Increasing Russian access to this information, however, could be key to undermining Russian support for the war and undermining the political standing of Putin.

Short of an all-out victory against Russian forces by the Ukrainians, it could be essential to galvanize public opposition to the war and impact Putin's decision calculus.

This is in part the goal of U.S. and EU sanctions against the Russian state, which have led the ruble to tumble in value and in turn raised the cost of living for everyday Russian citizens. Russian casualties, reaching an estimated 2,000 for the first five days of war, may also achieve such ends. Casualties and the public grief they inflicted on the mothers of dead soldiers were crucial in ending Soviet involvement in Afghanistan. Russian citizens also have long-standing connections with the Ukrainian people through family ties and shared language and history, and so they may be particularly sympathetic to the high civilian death toll in Ukraine.

Information can help the Russian population stay focused on the true cause of sanctions and the true cost of war.

Russia knows this, of course, and has taken steps to protect Russians from such content. It has blocked Russian access to Facebook and Twitter, shut down access to U.S. Radio Free Europe/Radio Liberty's Russian language news broadcasts, and shuttered the independent Russian news service Meduza to name a few. It has also blocked two prominent independent media sites, Echo Moscow and Dozhd, and has passed laws that criminalize the spreading of “fake news” with up to 15 years in prison.

The cracks, however, are apparent. Russian and Ukrainian influencers on TikTok have begun posting content, even if it is quickly removed, that expresses opposition to the war. Anonymous, the hacker group, has successfully motivated fans on Twitter to start posting anti-war themed Google reviews of Russian restaurants and outright internet hacks have defaced Russian government websites with anti-war messages. The Ukrainians have also gotten in the game, creating a Russian language website providing information about Russian casualties and POWs.

The United States, European Union, and NATO, as well as civil society groups, could directly support such efforts—not through the creation of fake social media accounts, the spread of disinformation, or the conveyance of simplistic pro-Western messages—but by supporting the dissemination of accurate news and information about the war and its cost.

First, the United States and others could get out of the way of those in Ukraine and elsewhere who are applying innovative methods to inject information into the Russian market. The Ukrainian information operators are leading the charge with a stunningly successful information campaign, including by speaking natively in Russian. However, there may be helpful ways to provide assistance, possibly by amplifying the message across broadcast channels that can reach Russian audiences. The West should also ensure that Ukrainians retain the capability to disseminate online content.

The West could offer assistance and support to online personalities and influencers who have access to the Russian social media market and reach out to and support Russian diaspora populations residing in the West who are intent on passing information to family and friends in Russia.

They could also explore creative ways to promote Russian access to independent Russian-language media, such as the Latvia-based Medusa, Ukraine-based sites, or Western-funded media such as Radio Free Europe/Radio Liberty.

Ensuring that the Russian people know the truth about what their government is doing in Ukraine could bring this war to an end soon rather than later.

The West also could help sympathetic Russians gain access to the free internet, possibly through sharing access to virtual private network technologies that can break through the firewalls installed by the Russian government.

Russia has taken increasingly aggressive actions to restrict access of information about the war in Ukraine. The United States and the West could help neutralize this by developing new techniques for ensuring Russian access to accurate and truthful information. Ensuring that the Russian people know the truth about what their government is doing in Ukraine could bring this war to an end soon rather than later. To quote a verse from Ecclesiastes, “Wisdom has an advantage over folly, as the advantage of light over darkness.”

Todd C. Helmus is a senior behavioral scientist at the nonprofit, nonpartisan RAND Corporation and a member of the Pardee RAND Graduate School faculty. Andrew Radin is a political scientist at RAND.