Taiwan Isn't the Ukraine of the Indo-Pacific. Try Vietnam Instead 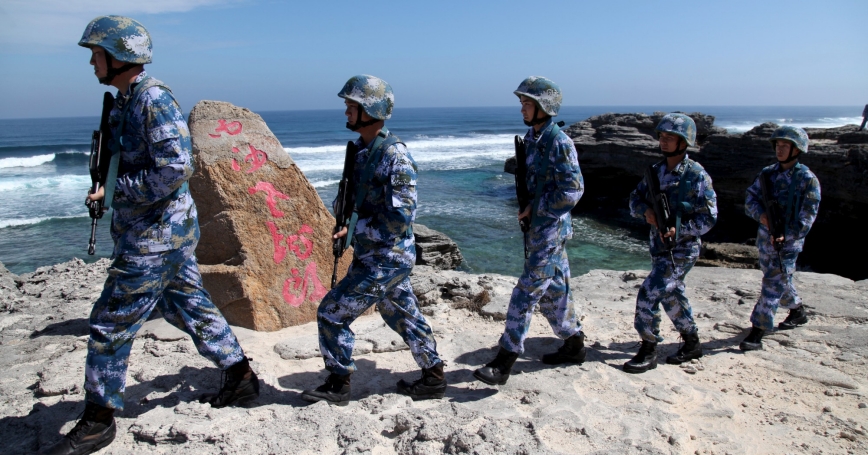 Russia's war in Eastern Europe has prompted Indo-Pacific security watchers to draw comparisons between Ukraine's plight and that of Taiwan with regard to China.

To be sure, Ukraine and Taiwan are both democratic states in conflict with a revisionist and authoritarian neighboring power. Vladimir Putin's argument that Ukraine is not a sovereign nation even seemed to echo the words of Xi Jinping and every Chinese leader before him: Taiwan is merely a renegade province and “reunification” will come, whether through peaceful or coercive means if necessary.

After these notable similarities, however, the Ukraine-Taiwan parallel falls flat. The more-applicable analogy is a different Indo-Pacific country: Vietnam.

A fellow socialist state ruled by an authoritarian Communist Party, Hanoi is under growing pressure from China, particularly around overlapping sovereignty claims in the South China Sea. While China has not threatened an invasion of Vietnam like Russia's of Ukraine, sometimes deadly maritime skirmishes between the two Asian countries have taken place. It is not unthinkable that an incident at sea could spill over onto land, disrupting the decades-long peace at their shared border. To the contrary, such a scenario is more likely than an invasion of Taiwan any time soon.

Vietnam possesses no security alliance with any great power or alliance network, which is exactly what made Ukraine susceptible. Hanoi's nonaligned foreign policy since the end of the Cold War means China might attack without fear of reprisal from stronger nations. Although U.S.-Vietnam relations have flourished in recent years, Washington's “comprehensive” partnership with Hanoi is the lowest level of partnership in Vietnam's hierarchy.

Vietnam possesses no security alliance with any great power or alliance network, which is exactly what made Ukraine susceptible.

The collapse of the Soviet Union left Vietnam feeling spurned by alliances to the extent that Hanoi does not even have a security alliance with its long-standing friend Russia. This puts Vietnam truly on its own in the South China Sea. The Philippines, by comparison, has large, overlapping sovereignty claims with China but can fall back on its alliance with Washington.

Granted, Taiwan also lacks an alliance with the United States or any other great power. However, every administration since the United States severed diplomatic ties to Taipei for Beijing in 1979 has supported Taiwan with the necessary armaments for its defense under the auspices of the Taiwan Relations Act. Moreover, just last October, President Joe Biden twice affirmed that the United States was prepared to defend Taiwan if China launched a military attack against the island. Vietnam can have no such expectation.

Vietnam, like Ukraine, has also been attacked previously by its larger neighbor. Russia seized Crimea in 2014 and infiltrated the Ukrainian border regions of Donetsk and Luhansk. Similarly, China seized part of the Paracel Islands from South Vietnam in 1974 and refused to return them once Vietnam reunified under communism. Then, in 1979, China's People's Liberation Army invaded to “teach Vietnam a lesson” for intervening in Cambodia against the China-backed Khmer Rouge.

Vietnamese social media has been abuzz regarding these parallels since the start of the Russia-Ukraine crisis. According to one recent commentary, the only thing that saved Vietnam from a full invasion was its now-defunct alliance with the nuclear-armed Soviet Union.

Beijing has continued to exercise military options against Vietnam. In 1988, for example, China evicted Vietnamese forces at Johnson South Reef in the Spratly Islands. For the last decade, China has been building military bases on artificial islands in the Spratly Islands and deploying forces to the Paracel Islands.

China, which today fields the world's largest navy and the region's largest coast guard and maritime fishing militia, now routinely patrols disputed areas and forces rival assets out of the region. In early March, the PLA conducted an operation within Vietnam's exclusive economic zone, probably to recover a crashed warplane, without permission from Hanoi.

Meanwhile, at the land border, the establishment of at least one, perhaps two, PLA bases nearby became public last year—a missile and helicopter base. Beijing's new land boundary law, also passed in 2021, encourages the active defense of Chinese borders with force, suggesting that PLA units operating out of these bases could be empowered to apply additional pressure against Vietnam.

Taiwan also faces growing threats, particularly Chinese warplanes flying near or making incursions into the island's air defense identification zone. However, China has never taken any direct military action against the island since the Nationalist government fled there at the end of the Chinese civil war in 1949. This is not to say cross-Strait ties have been without incident.

In 1954–55 and 1958, the PLA shelled Taiwanese military outposts on Jinmen and Matzu near China's coastline. Also, in 1995 and 1996, Beijing lobbed missiles near Taiwan to protest then-president Lee Teng-hui's visit to the United States. Still, overall, Beijing has refrained from taking military action against the island of Taiwan itself. The same cannot be said about Vietnam.

China would probably also expect to easily defeat Vietnam in a conventional armed conflict, though not necessarily in a prolonged guerrilla conflict, not unlike Russia's prewar assessment of the inferiority of Ukrainian forces. China maintains vast military advantages over Vietnam, whether in the form of ballistic and cruise missiles, bombers, fighter aircraft, submarines, surface fleets, and other areas.

After announcing 7.1 percent funding increase earlier this month, Beijing's defense budget is about $230 billion, at least 32 times the size of Hanoi's estimated $7 billion budget. Moreover, China has assiduously invested in military professionalization, particularly to enhance cooperation across services, to eventually transform the PLA, per Xi's guidance, into “world-class” forces. Vietnam is far behind China by every conceivable measure.

Taiwan also benefits from decades-long assistance in procuring advanced weapon systems from the United States, including last year's purchase of 66 F-16V fighter jets to strengthen air combat and patrol capabilities. Taiwan has made working across its armed services and perfecting the ability to wage warfare in the air and naval domains top priorities, whereas Vietnam has not, likely undermining the quality of its joint operations.

The Russia-Ukraine to China-Taiwan comparison is severely lacking. Rather, it is a China-Vietnam scenario that appears more apt.

Geographically, too, conquering Taiwan would probably be far trickier than Russia's land invasion of Ukraine. Russia amassed troops along the border and invaded what was mostly flat and contiguous terrain. China, on the other hand, would have to successfully conduct an amphibious landing operation against Taiwan and could be vulnerable while transiting the Taiwan Strait. Vietnam's shared land border with China, similar to Ukraine, does not present any particularly grueling topographical challenges.

No analogy is ever perfect, but the Russia-Ukraine to China-Taiwan comparison is severely lacking. Rather, it is a China-Vietnam scenario, in which a South China Sea incident escalates into a bigger conflict on land, that appears more apt.

This conclusion cuts both ways. On the one hand, it should be soothing to Washington to know that Taiwan is not as vulnerable as Ukraine. On the other, the United States might want to take another look at Vietnam's susceptibility.

This commentary originally appeared on Nikkei Asia on March 21, 2022. Commentary gives RAND researchers a platform to convey insights based on their professional expertise and often on their peer-reviewed research and analysis.