This country-level report in a series explores Vietnam's perspective on rising U.S.-China competition. The report evaluates how Vietnam is responding to U.S. and Chinese influence in diplomatic and political, economic, and security and military domains, especially as U.S.-China competition grows across the Indo-Pacific and globally. The report also addresses the prospects of enhancing U.S.-Vietnam relations to counter rising Chinese coercion. 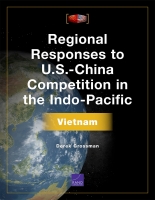 Vietnam is arguably one of the most important partners for the United States in the Indo-Pacific region. Vietnam embodies the "free and open" values of the White House's Indo-Pacific Strategy because Hanoi seeks to preserve its sovereignty, territorial integrity, and independence in the face of China's increasingly intrusive economic and military power. Vietnam is deeply concerned about the long-term geostrategic implications of China's Belt and Road Initiative and is standing up to Beijing's territorial claims and the growing assertiveness of the People's Liberation Army in the South China Sea.

The author leverages a framework that RAND developed for a seven-part series on regional responses to U.S.-China competition, with this report focusing on Vietnam's perspective. Both Beijing and Washington have pressure points on Hanoi — diplomatic and political, economic, and security and military. The report evaluates how Hanoi is responding to these influence variables, especially as U.S.-China competition grows fiercer across the Indo-Pacific and globally. Understanding this requires analyzing Vietnam's security policy and domestic politics and political, economic, and security ties to the United States and China. Finally, the author discusses the prospects of achieving enhanced U.S.-Vietnam relations to counter rising Chinese coercion in the future, with an eye toward the specific needs of the U.S. Air Force. The research draws on a range of primary and secondary sources in both English and Vietnamese, data sets, and interviews conducted in English that occurred primarily in April 2019.