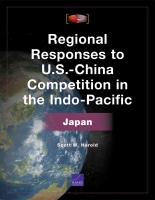 The 2017 U.S. National Security Strategy and the National Defense Strategy summary describe a world characterized by a return to great-power competition, most notably with China in the Indo-Pacific region. America's enduring alliance with Japan not only is the cornerstone of U.S. force posture in the Indo-Pacific region, but also magnifies and bolsters U.S. influence across that vast swath of territory. Within the region, Southeast Asian countries have been particularly exposed to China's expanding influence and coercive diplomacy in recent years, making the ten countries of the Association of Southeast Asian Nations (ASEAN) a key focus for U.S. national strategy and the U.S. Department of Defense (DoD) in particular.

The author leverages a framework that RAND developed for a seven-part series on regional responses to U.S.-China competition, with this report focusing on Japan's perspective. This report assesses the prospects for deepening U.S.-Japan alliance cooperation and coordination in Southeast Asia through 2030 to compete with China. It surveys official Japanese documents, draws on a wide variety of secondary source analyses, and reports the results of more than 25 face-to-face interviews with Japanese defense and foreign policy officials, military officers, think-tank analysts, and academic specialists.