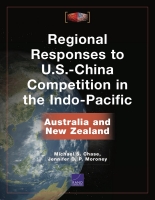 This report on Australia and New Zealand is part of a project examining the perspectives of U.S. allies and partners in the Indo-Pacific as they formulate and implement their responses to China's more assertive foreign and security policy and to a more competitive U.S.-China relationship. Australia and New Zealand have expanded their economic ties with China, but there is growing concern in both countries about China's rising power and influence. In response, Australia is strengthening its alliance with the United States and becoming more actively involved in the Indo-Pacific region, especially in the Pacific Islands. New Zealand is also strengthening its security ties with the United States and intensifying its regional outreach (particularly, with its Pacific Island neighbors).

This stepped-up engagement in the region creates opportunities for the United States and, specifically, for the U.S. Department of Defense and the U.S. Air Force to work with these two countries (and with other regional partners) in new and innovative ways, both operationally and using soft-power tools and approaches.