The Ukrainian Military Has Defied Expectations. Here Is How U.S. Security Aid Contributed 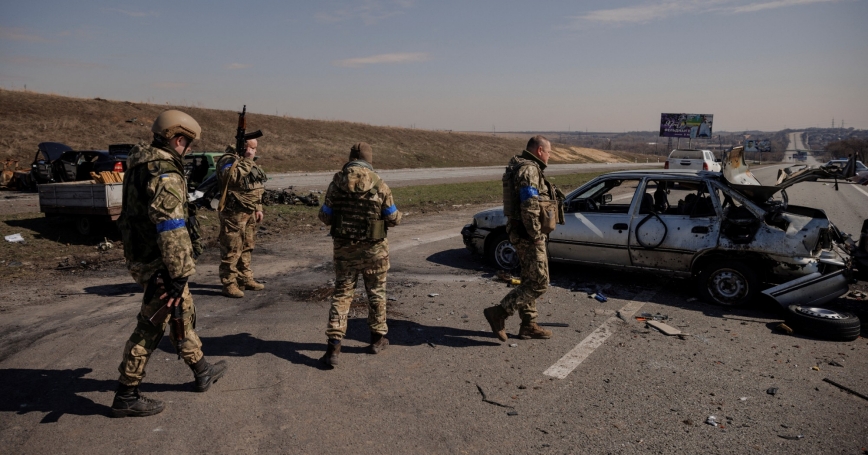 Ukrainian soldiers inspect civilian vehicles they said Russian troops used to create a barrier as they took up a position outside Kharkiv, Ukraine, March 29, 2022

by Louis-Alexandre Berg and Andrew Radin

Over the past weeks, the Ukrainian military has waged a surprisingly tough resistance against a much larger and more-capable Russian army. While it's too early for a full accounting, Ukraine's performance appears to be exceeding expectations.

But seven years ago, Ukraine's military was unprepared and largely ineffective when Russia's military seized Crimea (PDF). By 2022, Ukraine appears to have overcome at least some of the earlier challenges.

Ukraine seems to be a case where security assistance made a positive contribution—although Ukraine's own efforts are probably most important. The United States sent security assistance to Ukraine between 2014 and 2020, as part of a broader Western effort to strengthen the Ukrainian military.

Research suggests this type of assistance is often ineffective or counterproductive, however. Much larger programs in Iraq and Afghanistan failed to produce effective militaries, for example.

It's All About the Institutions

A crucial but overlooked factor enabling Ukraine's military performance may be its defense institutions. The way militaries are governed—how they manage and oversee personnel, resources, and information—is central to battlefield effectiveness. These institutions also affect prospects for long-term stability in countries affected by violent conflict.

A crucial but overlooked factor enabling Ukraine's military performance may be its defense institutions.

In 2014, institutional problems contributed to Ukraine's combat ineffectiveness—Ukraine's armed forces could do little to stop the Russian seizure of Crimea. When the war began, only 6,000 of the 41,000 Ukrainian army personnel were available, and its battalions had rarely conducted live fire exercises.

Later, in the Donbas region of eastern Ukraine, flaws in command and control reportedly led to delayed orders that contributed to the February 2015 defeat of Ukrainian forces at Debaltseve. Ukraine was eventually able to stop the separatist advance, in part by mobilizing older veterans with prior military service. Ukraine also depended on “volunteer” paramilitary units, some of which were funded by oligarchs with their own political agendas.

Ukraine's defense industry and procurement systems faced particular problems. Although Ukraine could produce modern weapons, its defense industry focused on exports rather than meeting local needs, and the sector was notoriously corrupt.

Procurement snags also prevented Ukraine's military from receiving U.S. equipment. A 2016 RAND study observed that Ukraine's laws limited the authorities under which the United States could transfer military equipment to Ukraine. This effectively slowed the transfer of Coast Guard cutters, anti-tank missiles, and other equipment. Changes to the procurement system would become a critical front not only to address corruption, but to enable Ukraine to defend itself.

Confronting institutional weakness has become an increasingly important part of security assistance worldwide—our research sheds light on when these efforts succeed or fail. Institutional changes to strengthen civilian oversight or prevent corruption often fail in the face of opposition from local political networks. Institutional change is more likely when it is in the interest of local leaders, including when new leaders with weak ties to the armed forces benefit from stronger oversight.

The election of Petro Poroshenko, Ukraine's president from 2014 to 2019, represented a departure from the prior regime. But the oligarchs who controlled Ukraine's business assets continued to protect their informal ties to defense institutions. Investigative reports found that Poroshenko personally benefited from these ties—and a close associate was implicated in a defense procurement scandal in 2018.

Poroshenko cooperated with some restructuring efforts that aligned with his interests—but avoided those that affected the defense industry. Ukraine adopted U.S. advice as the blueprint for institutional change. Poroshenko made the minister of defense a civilian position, and restructured command roles and responsibilities in eastern Ukraine. But efforts to update Ukraine's opaque procurement process made little headway, and Poroshenko's government slow-rolled changes within Ukroboronprom, Ukraine's state-owned defense conglomerate.

The election of actor-turned-politician Volodymyr Zelensky as president in 2019 offered new hope. He campaigned as an independent reformer focused on weakening the hold of oligarchs. He appointed Andriy Zagorodnyuk, the former head of the Ministry of Defense Reform Office, as the new minister of defense. But Zagorodnyuk was removed after six months, and Zelensky faced criticism for not moving quickly enough.

But Zelensky had few ties to Ukraine's oligarchic networks, and the country made progress on critical changes related to defense procurement. A new 2020 defense law addressed long-standing issues by increasing transparency and competition in defense procurement. Leaders intent on change also took over Ukraine's defense industry, and a 2021 law finally instituted wide changes within Ukroboronprom.

The Role of Security Assistance

Overhauling Ukraine's procurement institutions has facilitated the recent surge of security assistance to Ukraine—and has likely enabled the military to draw on more locally produced equipment.

U.S. assistance contributed to these defense updates because the necessary conditions were in place: Ukrainian leaders recognized the value of Western support for their own political success. Zelensky's government saw the value of weakening the oligarchic interests that were working against them. Ukrainians did not always see the value of Western advice and Western leverage was limited given that Ukraine had no real prospect of NATO membership. Proposals to adopt Western tactical command structures, for instance, were largely ignored.

Ukraine's military performance in recent weeks reflects other factors, including combat experience gained in the 2014 conflict, broad public support, and a committed population—not to mention Russian miscalculations. The conflict is not over, and much could change. Nonetheless, the experience in Ukraine suggests U.S. security assistance could achieve greater impact by focusing on institutions and responding when political openings emerge.

Louis-Alexandre Berg is assistant professor of political science at Georgia State University and the author of Governing Security After War: The Politics of Institutional Change in the Security Sector (Oxford University Press, 2022). Andrew Radin is a political scientist at the nonprofit, nonpartisan RAND Corporation and the author of Institution-Building in Weak States: The Primacy of Local Politics (Georgetown University Press, 2020).

This commentary originally appeared on The Washington Post Monkey Cage Blog on March 29, 2022. Commentary gives RAND researchers a platform to convey insights based on their professional expertise and often on their peer-reviewed research and analysis.