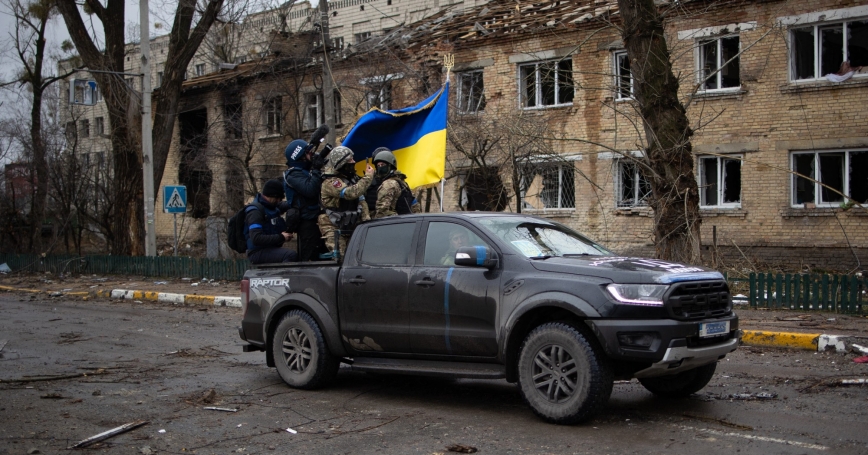 Ukrainian soldiers and press after clashes between the Ukrainian and Russian Army in Irpin, outside of Kyiv, Ukraine, April 2, 2022

While insurgency rarely offers a path to early victory, a campaign of popular resistance that supports the continuing conventional battle could give overmatched Ukraine an edge in its fight against Russian occupiers.

The conflict in Ukraine looks likely to provide Europe's first large-scale insurgency since the end of Ukrainian resistance to the Soviet and Polish reoccupation of the Ukrainian populated areas formerly overrun by the Germans during World War II.

Ukraine's post–World War II resistance was led by the Organization of Ukrainian Nationalists, a far-right group that had collaborated with the Germans and survived long enough to also receive support from the CIA. It is memories of this insurgency, which the CIA credited with having killed 35,000 Soviet soldiers, police, and Communist Party officials, that Putin is trying to revive when he labels the current Ukrainian leadership as Nazis.

Insurgency has since become the world's most common form of warfare, employed by national liberation movements to free themselves from European colonial rule, by Marxist revolutionaries and Islamist militants, and by the United States and the Soviet Union in proxy conflicts around the world.

A force as large as 800,000 soldiers and police might be required to fully pacify all of Ukraine. That is five times the number Russia has deployed at present.

Experience shows that insurgent campaigns can last decades, that external assistance and an adjacent sanctuary are often critical to insurgent success, and that counterinsurgency campaigns can be very long and manpower-intensive. U.S. military doctrine, for instance, cites a ratio of 50 counterinsurgents for every 1,000 inhabitants. This suggests that a force as large as 800,000 soldiers and police might be required to fully pacify all of Ukraine. That is five times the number Russia has deployed at present.

The Ukrainian leadership has already begun to form a resistance movement to fight behind enemy lines. They already have established the legal and organizational basis for such an activity. They've created a website with advice directed to ordinary citizens looking to engage in resistance activities.

And there seems little doubt that many will do so. But the ability to sustain a robust insurgency in the face of massive Russian repression will likely be heavily influenced by the results of the conventional battle. Will the Ukrainian government retain control of significant territory? Will the conventional battle continue? If the answer to these questions is no, will a neighboring state be willing to allow its territory to be used to mount and sustain an insurgency?

Should the Ukrainian government be forced into exile, its resistance movement would find itself in a position similar to that of the French resistants between the fall of France (June 1940) and D-Day (June 1944). Over those four years, clandestine networks were built that focused on intelligence, information operations, and small-scale sabotage, keeping the flame of nationalism burning and preparing for the arrival of Allied forces. Only once the conventional battle resumed, however, were the risks and costs of mounting a full-fledged insurgency deemed commensurate with the potential benefits. And in the Ukrainian case, an allied rescue force probably won't be coming.

NATO governments are likely to be willing to host a Ukrainian government in exile should that become necessary. Allowing that government to direct and sustain a large-scale insurgent campaign from NATO territory is another matter. Even if the Russians forbore from mounting an overt attack on such a sanctuary, one would have to expect them to take deniable steps to disrupt activity, including sabotage, assassinations, and cyberattacks.

The ability to sustain a robust insurgency in the face of massive Russian repression will likely be heavily influenced by the results of the conventional battle.

Consequently, the relevant border between NATO and occupied Ukraine could see infiltration by both sides, as insurgents and counterinsurgents traveled in both directions, in all likelihood in parallel with criminal networks engaged in sanctions evasion. The danger of escalation could be ever present.

How much latitude to afford a Ukrainian insurgency would be a decision for one or more of the potential host countries—Poland, Hungary, Slovakia, and/or Romania—but also for the rest of the alliance, which would be committed to defend the host state in the event of a Russian attack. This could well result in restrictions being placed that would limit the scope of resistance.

A negotiated cease-fire would probably also require some restraint on resistance activities if it is to hold for any length of time.

Insurgency is commonly viewed as an alternative to conventional combat, the choice of the weaker party, which cannot prevail in a stand-up fight. Such conflicts become endurance contests that can take decades to resolve. But insurgency as a complement to conventional battle can yield much quicker results by threatening enemy lines of communication and drawing off his forces from the main battle.

Insurgency alone offers, at best, the prospect of distant success at tremendous cost. When combined with a stalemated but still active conventional battle, however, it may provide the defender the decisive edge.

James Dobbins, a former assistant secretary of state for Europe, is a senior fellow and distinguished chair in diplomacy and security at the nonprofit, nonpartisan RAND Corporation. He's the author of “Foreign Service; Five Decades on the Frontlines of American Diplomacy.”

This commentary originally appeared on The Hill on April 6, 2022. Commentary gives RAND researchers a platform to convey insights based on their professional expertise and often on their peer-reviewed research and analysis.