Effective Use of Nonlethal Weapons Could Require Combating Disinformation 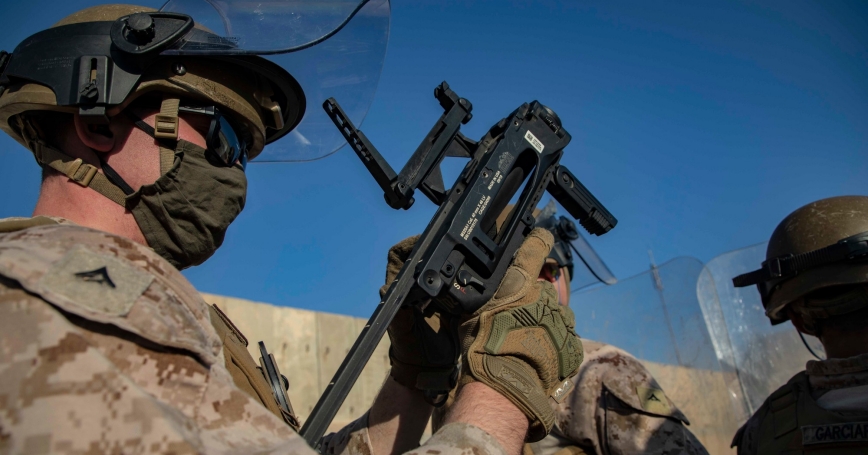 In an era of strategic competition, nonlethal weapons can potentially bolster U.S. Department of Defense (DoD) capabilities. The temporary and reversible effects of these weapons can provide DoD with an appropriate response to provocations that don't merit the use of lethal force, reducing the potential for collateral damage while mitigating the risk of inadvertent escalation in peacetime and gray-zone situations.

Public perceptions can have powerful effects on how these systems are employed and the impact of their use. Understanding these factors, and particularly the potential for negative narratives emerging from the use of novel technologies could be vital for DoD as it develops innovative nonlethal weapons because the technologies they rely on may be poorly understood by the general public.

Public perceptions can have powerful effects on how nonlethal weapons systems are employed and the impact of their use.

This issue is far from hypothetical. For example, DoD has a nonlethal, directed-energy weapon—the Active Denial System (ADS)—that uses a beam of millimeter waves to create an intense heating sensation that goes away as soon as a person leaves the beam. Millimeter waves are incapable of penetrating beyond the outermost layer of skin, so their effects are superficial and do not cause long-term damage. Nevertheless, ADS has been the subject of a great deal of controversy. Because most people outside of DoD are unfamiliar with millimeter waves, perceptions that DoD has developed a “heat ray” meant to microwave people have gained traction. ADS is also sometimes brought up in discussions of “Havana syndrome,” a type of brain damage potentially caused by microwave attacks, even though its effects are temporary and entirely different. This controversy may inhibit the deployment of ADS, despite its proven safety record and impressive efficacy.

Expanding public-information efforts to address controversies surrounding novel technologies like ADS could be important as the United States engages with near-peer competitors like Russia and China, who both recognize the power of narratives in shaping competition and conflict. In particular, Russia's recent use of disinformation to justify its invasion of Ukraine is but one facet of its extensive engagement in information operations. RAND research describes these efforts as a “firehose of falsehood,” in which Russia uses traditional and social media channels to flood foreign audiences with unreliable information that exploits existing societal tensions to increase feelings of alienation among Russian-speaking populations in neighboring countries and introduce social and political instability more broadly. Portraying U.S. and NATO actions as aggressive and escalatory contributes to both aims—and has been a key component of Russian rhetoric in recent days. In future gray zone conflicts, where other nations can take advantage of ambiguity and misdirection while using purported civilians as proxies (and the United States may face significant incentives to avoid escalation), use of new nonlethal weapons may provide fertile ground for disinformation by U.S. rivals.

What's unknown is easily demonized, and what's demonized may never be used and thus remains unknown.

All of this is already possible for nations skilled in information operations, and, as the COVID-19 pandemic has made abundantly clear, disinformation spreads like wildfire. Acknowledging that DoD may not be the only arbiter of how these weapons are perceived could be critical. Furthermore, what's unknown is easily demonized, and what's demonized may never be used and thus remains unknown.

If DoD wants to introduce novel capabilities that commanders feel comfortable using, it could work to ensure that its current public outreach efforts aren't undone by the unopposed spread of disinformation during a crisis. Taking this risk seriously could mean exploring how large-scale, pre-emptive public-information efforts or responsive counterdisinformation campaigns could prevent adversaries from turning U.S. forces' use of nonlethal weapons against them in the realm of public opinion. Addressing the problem could enable U.S. forces to use nonlethal weapons confidently and successfully to reduce casualties and achieve narrative dominance.

Sydney Litterer is a research assistant and Krista Romita Grocholski is a physical scientist at the nonprofit, nonpartisan RAND Corporation.

This commentary originally appeared on RealClearDefense on April 22, 2022. Commentary gives RAND researchers a platform to convey insights based on their professional expertise and often on their peer-reviewed research and analysis.