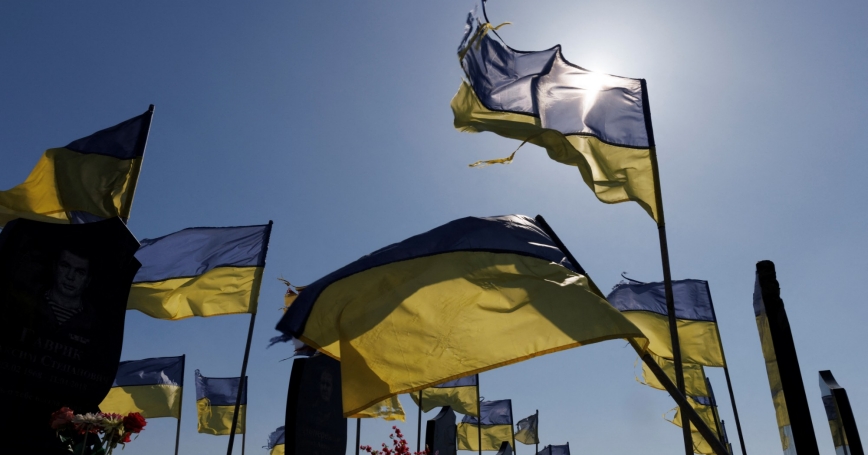 Ukrainian national flags fly over graves of fallen soldiers at a cemetery in Kharkiv, Ukraine, March 24, 2022

After two months of fighting in Ukraine, some longer-term geostrategic consequences are coming into focus. Russia may emerge as a massive loser. Aggression in Europe may be even riskier and costlier than once thought.

Despite an ebbing “correlation of forces,” an economically stagnant Russia has launched a costly war in Ukraine not unlike Stalin's decision to launch the Korean War in 1950. A faltering USSR likewise erred in 1979 by invading Afghanistan. In the future Russia could be more wary of the potential costs of overt military aggression.

Russia spends a lot on defense (third after the United States and China) and has modernized its military. But autocratic and rigid leadership, soldiers' poor will to fight, and deficient logistics have sapped military agility and endurance. Sanctions may deny Russia technology vital to modern weapon production. Neighbors might now be less in awe of Russia's might, and Beijing could view Moscow as a less-capable ally.

Russia's economy may decline by some 15 percent this year, in part because of severe sanctions, which Putin has likened “to an act of war.” In the future, the West might employ sanctions more often.

Russian aggression and atrocities in Ukraine have shattered Kremlin attempts to sow divisions in the United States and Europe.

Russian aggression and atrocities in Ukraine have shattered Kremlin attempts to sow divisions in the United States and Europe. Western audiences may become more resistant to information technology–enabled psychological and political warfare.

As in 2014 after Russia's first invasion of Ukraine, China may be cautious about helping Russia evade or backfill Western sanctions. China's economic interests in the West are far greater.

Despite Moscow's thinly veiled threat that it might use nuclear weapons, Ukraine and the West are undeterred. Any nuclear use could isolate Russia globally and deepen its economic decline as other states steer clear of it. Beyond any immediate military response, Western powers might further augment nuclear forces in Europe.

Ukraine Has Shined Far Beyond Expectations

Eight years of U.S. and NATO train-and-equip-programs have helped Ukrainians effectively use Western arms. Ukraine has humiliated Russia by compelling forces north and northeast of Kyiv to retreat and by sinking its Black Sea flagship, the Moskva. With more-powerful weapons from the West, Ukraine can better defend its southern and eastern regions.

The West Has Learned Lessons and Gained Strategic Advantage

To counter heightened repression in Russia and a torrent of false propaganda, the West might do more to penetrate Russian walls with truthful information. Voice of America, Radio Free Europe/Radio Liberty, the BBC, and Deutsche Welle ably use social media and VPNs. Talented Ukrainian cyber warriors with U.S assistance are weathering Russian cyber assaults against critical infrastructure.

The aggression in Ukraine is spurring increased NATO defense spending, although perceptions of Russia's battlefield weaknesses could lessen the increase.

President Biden's caution that the United States “will not fight a war against Russia in Ukraine” might raise doubts elsewhere. Taiwan could think that if China attacked, the United States might hedge its response. But Beijing might worry that the success of U.S. weaponry in Ukraine hints at potential risks from U.S.-made precision guided munitions.

Earlier the West hesitated to provide heavy arms to Ukraine and the United States blocked a MiG-29 transfer. As the fight has moved to eastern Ukraine, the West has begun supplying advanced indirect-fire weapons, armored fighting vehicles, and a variety of manned and unmanned combat aircraft.

The war seems to have helped nudge Biden to drop his plan to stipulate that “the sole purpose of our nuclear arsenal is to deter—and, if necessary, retaliate for—a nuclear attack.” The war and concerns of U.S. allies likely influenced his decision. NATO's dual-key nuclear posture in Europe is sustained by the German decision to acquire F-35 fighter bombers.

Few goals mistakenly scored into a team's own net rival Russia's errors in reviving NATO. The alliance is putting permanent, not just rotating, forces in its eastern flank. This summer Finland and Sweden may join NATO.

Perhaps not since the collapse of the USSR has European security been so challenged. But Ukraine and its Western partners are showing that aggression in Europe may not pay.

William Courtney, an adjunct senior fellow at the nonprofit, nonpartisan RAND Corporation, was U.S. ambassador to Kazakhstan, Georgia, and U.S.-USSR negotiations to implement the Threshold Test Ban Treaty. Peter A. Wilson is a senior adjunct international/defense researcher at RAND and teaches a course on the history of military technological innovation at the Osher Lifelong Learning Institute.

This commentary originally appeared on The Hill on April 26, 2022. Commentary gives RAND researchers a platform to convey insights based on their professional expertise and often on their peer-reviewed research and analysis.