The Value of Institutional Capacity Building Through Professional Military Education 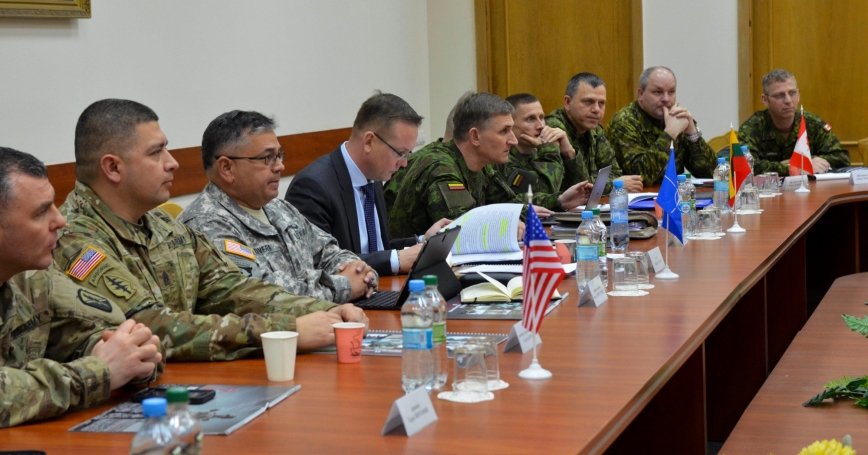 Representatives from the United States, Canada, Lithuania, NATO, and Ukraine discuss the noncommissioned officer development-training course at the Office of Defensive Cooperation in Kyiv, Ukraine, February 24, 2016

There are several explanations for Ukraine's ability to successfully resist the overwhelming force of Russian air power, surface-to-air missiles, and nearly 200,000 ground forces: tremendous motivation to defend their families, homes, and nation; extraordinary resilience to the damage and horrors that have come with war in one's backyard; and an exceptional willingness to fight a far better-equipped enemy with advanced weaponry. The bravery and tenacity of the Ukrainian armed forces and its people have captured the admiration of many around the globe. But there is another reason for some of this success that has also been long in the making—the support provided by the United States and NATO to the Ukraine Armed Forces since the nation's independence in 1991.

The United States has been assisting the Ukrainian military since 1994, just a few years after Ukraine declared its independence from the Soviet Union. The first U.S.-Ukraine military cooperation plan included 14 events, but by 1997 the plan had grown to 70 events, everything from exercises to training to professional military education. More recently, the State Department stated that between 2014 and 2022, the United States committed more than $5.6 billion in total assistance to Ukraine, including both security and nonsecurity assistance.

One long-standing focus of security-related cooperation is defense education reform. The Defense Education Enhancement Program (DEEP) is a joint U.S.-NATO program designed to contribute to the professionalization of the officer corps, NCO corps, and civilian defense officials of NATO partner nations. The United States and NATO responded to the 2013 request by the Ukraine Minister of Defense for defense education support with a multi-year program of cooperation. Ukraine's commitment to change was clear when, during the first DEEP visit to Ukraine in March 2013, the general officer responsible for military education policy for the Ukrainian Armed Forces stated: “We know that we need to change, and we are willing to work with you to make it happen.”

The United States has been assisting the Ukrainian military since 1994, just a few years after Ukraine declared its independence from the Soviet Union.

The DEEP program in Ukraine quickly became the largest DEEP program in the world, with more than five times as many events in 2018–2020 as the next-largest country program. Many countries beyond the United States also contribute expertise, and sometimes play the principal roles. In Ukraine, multiple other countries have provided support, including Bulgaria, Canada, Denmark, Estonia, Germany, Latvia, Lithuania, Poland, and Romania.

DEEP has worked with 11 different military schools in Ukraine. Many of these efforts were designed to help the Ukrainian military transform from a rigid centralized Russian-style operational decisionmaking process to one where junior and mid-level leaders are expected to take initiative on the battlefield. As examples, DEEP has facilitated the transformation of NCO education and training, enhancing the ability of junior leaders throughout the Armed Forces to execute successful small-unit tactics. Thanks to DEEP, the military academies teach leaders at all levels about military decisionmaking processes that can be rapidly adjusted to changing tactics and operational procedures. Also, mid- and senior-level officers have a new ability to integrate the military services in joint operations, key for integrating ground forces with air and air defense capabilities.

These activities to professionalize the Ukrainian armed forces may have had a significant impact on Ukraine's ability to fight. For example, the Ukrainian forces in Mariupol have withstood the massive Russian attack for nearly a month with little or no resupply or hope for relief, suggesting military leaders have been able to innovate and take initiative. More generally, to have any degree of success in the street fighting associated with the kind of urban warfare taking place there and in other Ukrainian cities, small-unit leaders must be able to operate on their own without detailed direction from superiors.

Though DEEP and other security cooperation activities have been temporarily suspended in Ukraine, they are ongoing in many other countries around the globe. This work quietly helps allies and friends professionalize and modernize their defense forces. Ukraine is an important and timely example of how these efforts can make the United States more secure by helping U.S. friends and allies be more stable, resilient, and self-sufficient. Moreover, security cooperation supports U.S. national security objectives since the need for U.S. troops to directly engage in combat is reduced. And security cooperation is cost-efficient, representing only a very small percent of defense expenditures (just over 1 percent of DoD's FY21 budget).

Security cooperation activities generate few dramatic Pulitzer Prize–winning photos or gripping narratives—in fact, security cooperation rarely makes headlines at all. But it may deserve more attention and support exactly because it enhances U.S. security and the security of American allies and partners in an effective and cost-effective way.

Susan Sohler Everingham is the inaugural director of Innovation Architecture and a senior policy researcher at the nonprofit, nonpartisan RAND Corporation. Alan G. Stolberg is a policy analyst at RAND, and coordinator of RAND's efforts to support the Defense Education Enhancement Program.