Ukraine War Is Motivating Taiwan to Better Secure Its Own Future 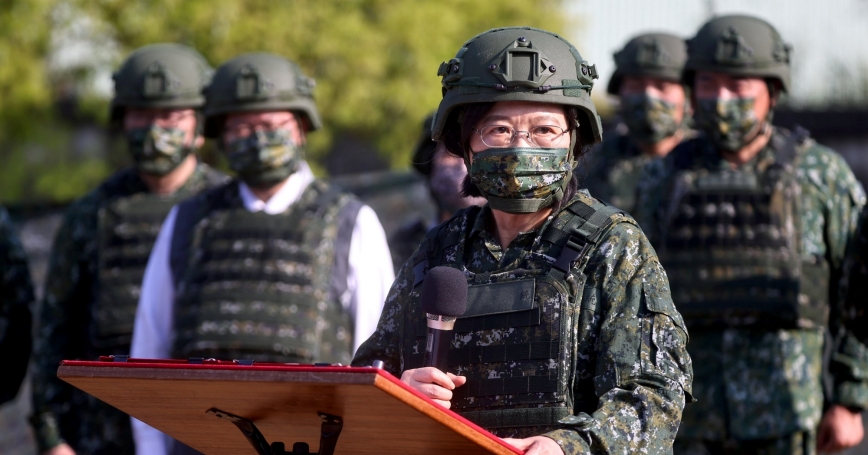 Russia's brutal invasion of Ukraine has drawn obvious parallels to a potential Chinese invasion of Taiwan.

The flurry of commentaries published since the start of the war have mostly considered how Beijing, not Taipei, might be learning from the conflict. Overlooking Taiwan's interest in and evolution in response to the war in Europe would be a mistake. As stiff Ukrainian resistance shows, smaller, less capable and civilian-bolstered security forces can make a real difference.

Indeed, Taiwan's leaders are clearly thinking quite a lot about Ukraine these days. Earlier this month, Taiwanese Foreign Minister Joseph Wu, while speaking with CNN's Fareed Zakaria, said, “We try to see what we can learn from Ukraine in defending ourselves.”

Wu highlighted two specific areas where Ukraine has had an impact on Taiwan's strategic planning. First, Wu noted that the Ukrainians used “small personal weapons to go against a large enemy.”

And second, Wu observed that “all of the males [in Ukraine] are having the determination to defend the country. They want to serve in the military. They want to go to the war zones to fight against Russia. That kind of spirit is enviable for the Taiwanese people.”

Taiwan has only scratched the surface in terms of preparing its citizens to protect themselves and help a future resistance.

On Wu's first point, Taiwan has only scratched the surface in terms of preparing its citizens to protect themselves and help a future resistance.

Last month, Taiwan's new All-out Defense Mobilization Agency, part of the Ministry of National Defense (MND), issued a “war survival guide” that explained various crisis responses, like how to find bomb shelters as well as food and water via smartphones, and how to prepare first-aid kits. But the agency is not charged with organizing civilian resistance, nor does the handbook provide guidance on it. It will be important to see if Ukraine moves Taiwan toward further civil-military integration and synchronization.

Taiwan has also, per Wu's first point, been investing in asymmetric defenses, whether anti-ship cruise missiles, sea mines, or surface-to-air missiles, for many years now. The problem, however, is that Taipei also prioritizes big-ticket items that can sometimes detract from cheaper and more-effective defenses. In 2019, for example, the United States sold Taiwan 66 F-16V fighter jets.

Taiwan's apparent schizophrenia is, in part, due to its controversial new military strategy, which is aimed at fighting China's People's Liberation Army closer to Taiwanese shores and even on the beaches themselves, rather than in the middle of the Taiwan Strait.

This new strategy, called the Overall Defense Concept, was endorsed by President Tsai Ing-wen in 2019 because it would afford Taiwan's military greater strategic and tactical advantages, especially in the face of the PLA's growing prowess. But the MND has slow-rolled the effort. It will be telling to see whether it remains the case that the strategy remains sidelined in light of Ukraine.

Wu's second point is a very delicate one. For years, outsiders, mostly Americans, have been skeptical and concerned over Taiwan's level of resolve or will to fight. To be sure, since transitioning from conscription to an all-volunteer force, Taiwan's military has struggled mightily to recruit young people.

And with a population of only 23 million, the island has a small pool of age-eligible candidates to draw upon. As my RAND colleagues concluded in 2017, Taiwan's reservists must increasingly take on more-difficult missions, and thus their training is likely insufficient in the event of an all-out Chinese invasion.

The same probably holds true today. Last month, Taiwan's defense minister, Chiu Kuo-cheng, proposed extending reservist conscription from four months to one year. It is a popular proposal, and one senior legislator in Tsai's party is calling for women to be conscripted for the first time ever as well. Either way, the All-out Defense Mobilization Agency will probably look to upgrade reservist training and synchronization not only with the military but other Taiwanese ministries.

Meanwhile, a telephone survey conducted by the Taiwanese Public Opinion Foundation, a private think tank in Taiwan, on about 1,000 Taiwanese aged 20 or older from April 17 through April 19 indicated that 53.8 percent of respondents somewhat or completely disbelieve that the United States would come to Taiwan's defense, up from 28.5 percent last October. In other words, America's reluctance to directly intervene on Ukraine's behalf against Russia is fueling a sense in Taiwan that Washington might not be as reliable as previously thought.

This comes despite the Biden administration's multiple arms sales and constant pledges of defensive support to Taiwan, which included President Joe Biden stating last year that the United States would help defend the island if China attacked.

It raises the prospect of whether former Japanese Prime Minister Shinzo Abe's call for the United States to end strategic ambiguity in favor of strategic clarity in its commitment to Taiwan is a potential shift Taipei might want to discuss with Washington to reassure the island's people. Washington is very unlikely, however, to end strategic ambiguity, thus making it even more critical for Taiwan to plan for its own defense.

Finally, Moscow invaded Ukraine with impunity in large part because the latter does not possess nuclear or other strategic weapons that might allow it to retaliate against the Russian homeland. Taiwan also does not maintain a nuclear weapons program, but in recent years it has been pursuing a variety of ballistic and cruise missiles that could make landfall on the Chinese mainland.

America's reluctance to directly intervene on Ukraine's behalf against Russia is fueling a sense in Taiwan that Washington might not be as reliable as previously thought.

Ukraine's long shadow might convince Taiwan to expand these programs, though one hopes that the U.S. nuclear umbrella will prevent the further proliferation of nuclear weapons. Either way, Washington might want to clarify and apply its commitment to Taiwan in light of deteriorating cross-strait ties.

Going forward, Russia's invasion of Ukraine is probably motivating Taiwan to better secure its own future versus China. But the Ukraine analogy is certainly imperfect. Many of the challenges currently facing Taiwan, such as shortcomings in reservist training or lingering confusion over its military strategy, are difficult to fix, assuming they are even fixable.

Regardless, as Foreign Minister Wu explained, Taiwan will continue to observe and consider the implications of Ukraine's successful resistance to Russia. That alone is something Beijing will have to worry about.

This commentary originally appeared on Nikkei Asia on May 13, 2022. Commentary gives RAND researchers a platform to convey insights based on their professional expertise and often on their peer-reviewed research and analysis.