Revealing the Impact of Non-Lethal Weapons 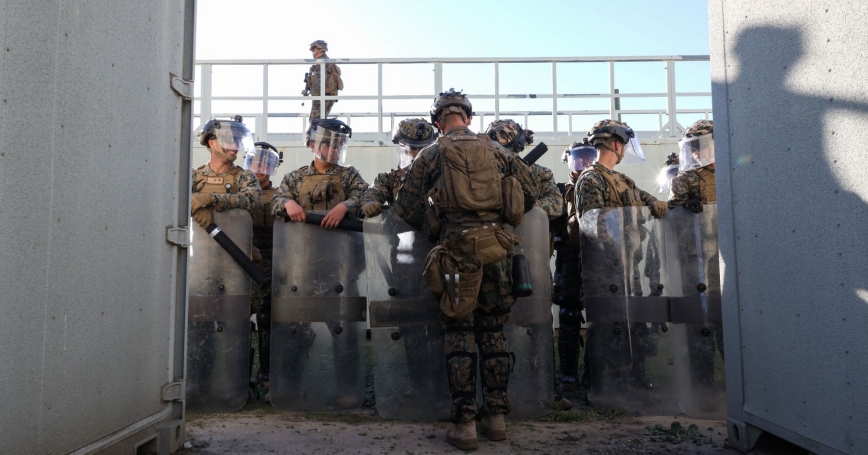 Non-lethal weapons (NLWs) can be useful to U.S. military forces in a variety of contexts, but the DoD faces a challenge in evaluating their appropriate use and the potential impact of their deployment.

For example, in “gray-zone” confrontations short of war with other powers, they can be used to demonstrate resolve while limiting the risk of unwanted escalation. In other circumstances, U.S. forces facing mixed crowds of civilians and fighters could use non-lethal weapons to get them to disperse.

NLWs can be particularly useful when another party's intent is unclear: for example, if the driver of an approaching vehicle or vessel does not turn away when a non-lethal weapon is employed, this suggests malevolent intent that might be met with lethal force. They can also aid in full-scale combat, helping to keep curious civilians away and to disorient enemy fighters. The Joint Intermediate Force Capabilities Office (JIFCO), which oversees NLWs for the U.S. Department of Defense (DoD), characterizes them as part of a suite of “intermediate force capabilities” (IFCs), alongside electromagnetic warfare, cyberwarfare, and information operations.

In a recent RAND Corporation study, we found an array of contexts in which NLW usage could contribute to operational successes and fulfillment of DoD-wide strategic goals. While these systems have often been pigeonholed as tools that are exclusively for military police, their relevance is increasing due to a renewed focus on reducing civilian casualties (a key initiative of the Secretary of Defense) and the need to confront great-power rivals in “gray-zone” contexts.

Most weapons are measured in terms of their ability to contribute to lethality or destruction, but systems that are intended to limit the harm they cause require a different approach.

Avoiding civilian casualties is particularly challenging in complex urban environments, and adequately preparing forces for such action includes giving them non-lethal capabilities that they can employ in ambiguous situations, or when facing a mix of civilians and fighters. The agile, effective use of NLWs could also help to manage standoffs in which China and Russia attempt to dominate an environment by bullying without fighting.

Whereas most weapons are measured in terms of their ability to contribute to lethality or destruction, systems that are intended to limit the harm they cause require a different approach. In our study, we characterized how to measure the effects of non-lethal weapons, using a structure called a “logic model.”

We linked inputs that enable these systems to be used to the activities that they perform, the direct outputs of those activities, higher-level outcomes, and ultimate DoD-wide strategic goals taken from the National Defense Strategy. Assessing the extent to which different elements of the logic model were connected helped to reveal the high degree to which NLW activities contributed to strategic goals, as well as to highlight the elements of the logic model that most heavily contributed to those goals. These key elements included activities such as affecting mobility or temporarily incapacitating parties, outputs such as gaining time and expanding options, and outcomes such as enhanced perceptions of U.S. forces or the ability to demonstrate resolve while safely managing standoffs short of war.

In concert with the logic model, we developed a set of associated metrics and a series of operational vignettes. For example, one vignette entailed Russian motorized forces in Syria trying to run a U.S. patrol off the road. There is a need to counter this threat, but also a desire to avoid killing Russian personnel, which could lead to dangerous escalation.

Given prior investment in inputs such as thorough training with NLW systems, U.S. forces could use NLWs to conduct several activities in the scenario this vignette envisions. Hailing devices could be used to warn the Russians to back off, while laser dazzlers could help to distract and disorient them, making it hard for them to drive aggressively. Electronic vehicle-stopping devices could halt the Russians' advance altogether.

The resulting outputs could include constrained options for the other party and effective response despite the need for restraint. These could contribute to outcomes such as demonstrating resolve while managing escalation and enhancing international perceptions of U.S. forces who handle situations using appropriate amounts of force. Collectively, these outcomes could support two of the strategic goals enumerated in the National Defense Strategy: improving DoD's ability to compete below the level of armed conflict and seizing the initiative to expand the competitive space.

Successful use of NLWs, however, may require a range of efforts long before their actual employment. Aside from investments in the systems themselves and sustainment of them, there is a need to consider the links among NLW activities, outputs, outcomes, and DoD-wide strategic goals. Above all, there needs to be collaboration on joint training standardization to ensure that personnel understand how and when to use them. While much has been done in all of these areas in recent decades, further focus on enhancing and integrating NLWs could give U.S. forces the capabilities they need for future challenges.

Scott Savitz is a senior engineer and Krista Romita Grocholski is a physical scientist at the nonprofit, nonpartisan RAND Corporation.

This commentary originally appeared on RealClearDefense on June 15, 2022. Commentary gives RAND researchers a platform to convey insights based on their professional expertise and often on their peer-reviewed research and analysis.