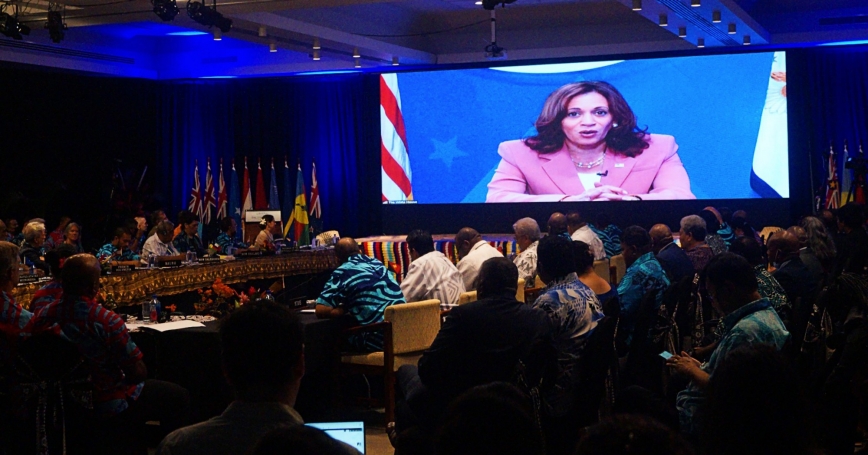 The Pacific Islands region hasn't had so much international attention since World War II. Thank China for that.

A document leaked in March revealed Beijing's plan to ink a secret security agreement with the Solomon Islands. The deal authorizes China to regularly make warship visits and provide training and assistance for Solomon Islands policing. Worried that Beijing might leverage the deal to acquire its first military base in Oceania, the United States and Australia quickly dispatched envoys to dissuade Solomon Islander Prime Minister Manasseh Sogavare from signing the agreement. He inked it anyway.

Then, in late May, Chinese Foreign Minister Wang Yi embarked (PDF) on a whirlwind 10-day, eight-country tour of the South Pacific to win concurrence on “China-Pacific Island Countries Common Development Vision,” a sweeping multilateral development and security agreement that would permanently enmesh Beijing in the region. In the end, Pacific Island foreign ministers rebuffed Chinese overtures, and Wang returned to Beijing empty-handed.

Despite Wang's failures, these events left traditional powers in the region—Australia, New Zealand, and the United States—rattled. But viewed from a broader perspective, China faces immense challenges toward achieving diplomatic, economic, or military parity with them, let alone primacy, in the Pacific.

The Solomon Islands deal, for instance, severely tarnished China's image because of the way it was done. Rather than conducting secret bilateral negotiations, Beijing should have been transparent from the beginning—or pushed Honiara in this direction—to allow input from the premier multilateral organization in the region: the Pacific Islands Forum (PIF).

In the Pacific, consensus-based decisionmaking is crucial, particularly on issues that might affect the entire region. According to the 2000 Biketawa Declaration, regional crises must be coordinated and resolved from within the “Pacific family,” i.e., among the 18 members of PIF. In 2003, for example, the Solomon Islands dialed (PDF) up fellow PIF members to deploy their police to help quell domestic unrest, an operation known as the Regional Assistance Mission to Solomon Islands (or RAMSI).

This year, by contrast, the Solomon Islands faced no immediate unrest, though there were riots in Honiara last November that turned anti-Chinese. Instead of engaging PIF members in security talks, however, Honiara unilaterally authorized an outsider, China, to potentially participate in future regional assistance missions. China also should have known that this would not sit well with the PIF. For instance, Samoan Prime Minister Fiame Naomi Mata'afa stated that issues like the Solomon Islands deal “need to be considered in the broader context of what we have in place and what we want to do in terms of security provisions for the region.” Beijing's decision will very likely make it harder for Pacific Islanders to trust that China is not trying to undermine their deliberative processes.

China also faces strong headwinds in the Pacific because of its fraught relationship with Taiwan. Taipei maintains 14 official diplomatic partnerships worldwide, four of which are PIF members: Marshall Islands, Nauru, Palau, and Tuvalu. These four nations tend to be very supportive of Taiwan based on their long history of cooperation and high suspicion of Beijing's plans for the region. Beijing has bristled at Taiwan's continued presence in Oceania and its inability to stamp it out. The matter came to a head in October 2020 when Chinese officials allegedly gate-crashed a Taiwan National Day celebration in Fiji and assaulted a Taiwanese official over the party's cake, which was emblazoned with the Taiwanese flag. Beijing said the incident was precipitated by the “false flag” displayed at the event.

In a study I led in 2019 for the RAND Corporation, my team and I meticulously documented how China was attempting to convince the Marshall Islands and Palau to switch their recognition to Beijing through economic carrots and sticks, respectively. To date, China has failed to move the needle, and in some cases, its initiatives have backfired. Palauan President Surangel Whipps Jr., for instance, argued on the PIF summit sidelines this month that “there's a lot of pressure on Palau.…What we've told [China] is that we don't have any enemies, so we shouldn't have to choose. If you want to have relations with Palau, you're welcome. But you cannot tell us that we cannot have relations with Taiwan.”

Meanwhile, in June, Tuvalu withdrew from a United Nations ocean conference because China blocked Taiwan's participation. When Marshallese President David Kabua visited Taipei in March, he extolled Marshall Islands–Taiwan relations as a “unique alliance,” adding that “Taiwan is a shining example of a vibrant and peaceful progressive nation. It is time for Taiwan to take its rightful place as an equal member of the family of nations.” Nauru has also consistently supported Taiwan, with Nauruan President Lionel Aingimea in 2019 describing their hearts as being “linked as one.”

China's attempt at ramming its China–Pacific Island Countries Common Development Vision through the foreign ministers' meeting of the PIF, which did not include all members, in May also elicited suspicion. Fiame complained, “We have not made a decision as we did not have enough time to look at it.” Others expressed serious concerns about the plan's contents. In a blistering and unprecedented letter (PDF) to the PIF, Micronesian President David Panuelo called it “a smokescreen for a larger agenda” to “ensure Chinese control of 'traditional and nontraditional security' of our islands.” PIF Secretary-General Henry Puna pointedly rebuked China's approach, saying, “If anybody knows what we want, what we need, and what our priorities are, it's not other people. It's us.”

Another challenge for Beijing is that the PIF is uninterested in getting swept up in great-power competition between China and the United States. In the midst of Wang's visits, Fijian Prime Minister Frank Bainimarama tweeted, “The Pacific needs genuine partners, not superpowers that are super-focussed [sic] on power.” His comments have real heft as Fiji is considered the traditional power center of the Pacific and it hosts the physical headquarters of the PIF.

Washington is still getting the benefit of the doubt on regional initiatives, whereas Beijing is not.

Yet this aversion hasn't hurt the United States as much as China. Significantly, U.S. Vice President Kamala Harris was invited to give a virtual address to the PIF summit this month in spite of an earlier decision to exclude all dialogue partners, including China. Likewise, when the Biden administration unveiled its Indo-Pacific Economic Framework for Prosperity in May to compete with China's growing economic clout, Fiji quickly announced its intention to join. In other words, Washington is still getting the benefit of the doubt on regional initiatives, whereas Beijing is not. The problem for China is that the United States along with traditional neighborhood friends, Australia and New Zealand, remain the dominant and likely preferred force, thus making it difficult for Beijing to break into the region and build its own influence.

China is also battling the Western narrative that its signature economic plan, a global investment and infrastructure development program known as the Belt and Road Initiative (BRI), creates unsustainable debt for recipient countries. Rightly or wrongly, many observers have blamed Sri Lanka's recent economic collapse, at least in part, on bad BRI loans.

Seven Oceanic nations are at high risk of debt distress, including Kiribati, Marshall Islands, Micronesia, Papua New Guinea, Samoa, Tonga, and Tuvalu. Another three countries, including the Solomon Islands, Vanuatu, and East Timor, are currently at moderate risk. These are all low-income nations that rely on external assistance for their survival. For Beijing to have future success in the Pacific, it must demonstrate how BRI is a safe and fair option for them, as most are participants in the program.

To be sure, there have been some successes from Beijing's perspective. Kiribati, like the Solomon Islands, dropped its diplomatic recognition of Taiwan in 2019. It has maintained a cozy partnership with China ever since. Beijing is refurbishing the airstrip on Kanton Island that Tarawa says is for tourism, but Washington fears it could be used as a future air base that would be about 1,600 miles from Hawaii. On the eve of this year's PIF summit in July, Kiribati stunned the forum by announcing it would not participate, ostensibly for reasons related to the forum's leadership.

Former Kiribati President Anote Tong, however, believes the current government is “cooking something” with Beijing. Most notably, Kiribati in November 2021 deregistered the Phoenix Islands Protected Area (PIPA)—the world's largest marine preserve—as a World Heritage site. When Wang visited Kiribati, the two sides signed a secretive fisheries agreement that may have offered China exclusive access to fishing there. If this is true, then it will further undermine Pacific Islander trust in Beijing.

Beijing's partial success with the Solomon Islands and Kiribati has rung alarm bells in Canberra, Wellington, and Washington, the latter of which has mostly and regrettably ignored the Pacific Island countries. In an attempt to put the United States back on the right track, Harris in her address to the PIF announced Washington would open diplomatic missions in Kiribati and Tonga (in addition to reopening the U.S. Embassy in Solomon Islands), appoint the first-ever envoy to the PIF, triple the administration's request for funding in the Pacific, bring back the Peace Corps to the region, reestablish the U.S. Agency for International Development mission in Fiji, and draft a Pacific Islands strategy. The Biden administration in June established “Partners in the Blue Pacific,” which includes Australia, Japan, New Zealand, and the United Kingdom; it is designed to tackle transnational challenges, such as climate change and infrastructure development.

The bottom line is that Beijing has had only limited success in spreading its influence in the Pacific.

New Zealand, which until recently has tried to steer a middle path on China—keeping political and economic ties separate—gave in and acknowledged its growing concerns. During her visit to the White House in late May, New Zealander Prime Minister Jacinda Ardern, in a joint statement with U.S. President Joe Biden, said, “[W]e note with concern the security agreement between the People's Republic of China and the Solomon Islands. In particular, the United States and New Zealand share a concern that the establishment of a persistent military presence in the Pacific by a state that does not share our values or security interests would fundamentally alter the strategic balance of the region and pose national-security concerns to both our countries.” Ardern later walked back this statement to appease Beijing, but it is clear she and her government are increasingly uncomfortable with Chinese activities in Oceania.

The bottom line is that Beijing has had only limited success in spreading its influence in the Pacific, with the notable exceptions of the Solomon Islands and Kiribati. To be sure, other victories should be expected to follow, such as, hypothetically, the potential signing of a very large BRI deal or other Taiwan allies switching their diplomatic recognition. The overall picture, however, is far more challenging for China. It is incumbent on those who oppose Beijing in the Pacific to hone their engagement strategies to prioritize the existential challenge of climate change, pandemic recovery, and economic programs that align with Pacific Islander needs. Doing so should keep China comfortably in the rearview mirror.

This commentary originally appeared on Foreign Policy on July 26, 2022. Commentary gives RAND researchers a platform to convey insights based on their professional expertise and often on their peer-reviewed research and analysis.