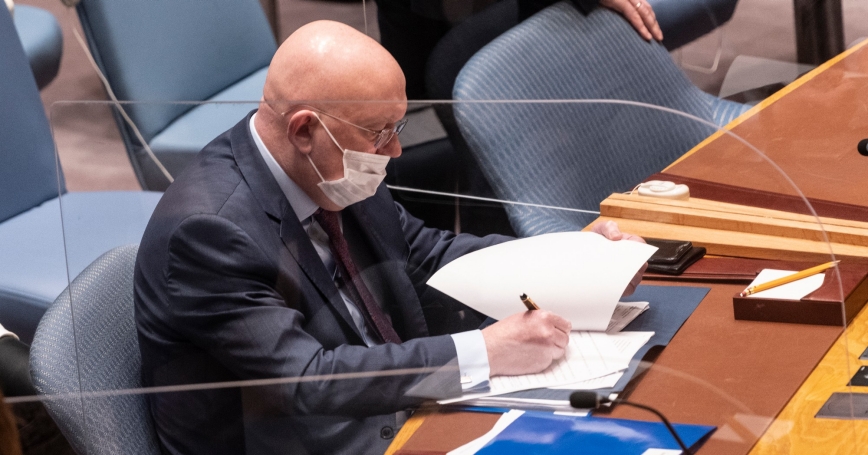 Russian Ambassador Vassily Nebenzia attends Security Council meeting convened at the request of the Russian Federation who accused Ukraine of developing biological weapons under the tutelage of the United States, at U.N. Headquarters in New York, March 11, 2022

For example, the United States was using Ukrainian laboratories to develop biological weapons that would be spread by specially trained migratory birds and diseased bats. Russian military officials also made fanciful claims about U.S.-sponsored experiments turning Ukrainian fighters into “the most cruel monsters” and efforts to create so-called ethnic bioweapons targeting ethnic Slavs such as Russians.

It's tempting to write off such claims as cartoonish propaganda. But Russia is also making similarly outrageous claims to the United Nations and other international forums, and that's more serious. Such maneuvers could dangerously undermine international arms control agreements.

Russian officials find these fabrications handy at home as well. They use them to justify their military operations and bolster domestic support for the war, despite the increasing losses of the Russian military. Estimates of Russian military personnel killed in little over six months range from 25,000 to 45,000, which is 10 times the number of fatalities the United States suffered in Afghanistan over the course of 20 years.

In March, Russia's ambassador to the United Nations called for a meeting of the U.N. Security Council to air its false allegations about Ukrainian laboratories developing biological weapons with U.S. support (PDF). Their accusations relate to real laboratories—ones that were performing epidemiological surveillance around the country, in Eastern Europe, and the Caucuses, and doing so transparently and in collaboration with neighboring countries and international partners such as the World Health Organization and the World Organization for Animal Health.

What the ambassador failed to mention was that Russian scientists visited these same laboratories in the past and never noted anything like what Russian officials now claim. Moreover, the United States had been collaborating with Russia in the same way—providing similar assistance to Russia to refocus the activities of former Soviet biological weapons laboratories, until Russia pulled out of the program in 2014, the same year it invaded Crimea.

Even Russian sources have said the accusations concerning biological weapons labs are false.

Additionally, even Russian sources have said the accusations concerning biological weapons labs are false—a group of independent Russian scientists who reviewed the documents the Russian government claimed to have seized that it said “proved” its case stated in an open letter to Russian media outlets that “the 'evidence' offered by the media is obviously false. It does not imply any development of biological weapons or even the use of particularly dangerous pathogens in the laboratories.”

Ultimately, the U.N.'s High Representative for Disarmament Affairs briefed Security Council member nations on the Russian claims about Ukrainian laboratories stating, “The United Nations is not aware of any biological weapons programs.”

Russian scientists have visited the Ukrainian laboratories in the past to discuss scientific and public-health work with no mention of anything Russian officials alleged. The United States provides biosafety, disease surveillance, and biosecurity assistance to more than 30 countries (PDF) in Africa; Eastern Europe; South, Central and Southeast Asia; and the Middle East (PDF).

The United States discloses (PDF) to state parties to the 1972 Biological Weapons Convention the type of assistance it provides to countries in accordance with the agreement's Article X (PDF) provision, which calls for “cooperation … with other states or international organizations to the further development and application of scientific discoveries in the field of bacteriology (biology) for the prevention of disease, or for other peaceful purposes.”

Having largely failed to garner support for its spurious claims at the Security Council, Russia has turned to another international forum. In June, Russia triggered (PDF) the BWC's Article V provision calling for a formal consultative meeting to air its claims once again. This is highly irregular. Article V has only been used once, in 1979 by Cuba (PDF) to raise allegations about the United States spreading crop-eating insects. As one thoroughly researched account (PDF) noted: “Even though the process ended up largely debunking the Cuban allegations, Havana appeared satisfied with having aired its concerns and did not pursue the issue further.”

The Article V formal consultative meeting will take place in private (PDF), attended by diplomats from countries that are signatories to the BWC. There will be no public broadcast (PDF) of the meeting. Russia will present its claims and other nations will respond to them. At the end of the process, there may be a final report that countries can endorse or oppose.

What might this all add up to? The recently concluded Nonproliferation Treaty review conference may offer a preview. In that case, Russia refused to agree to the final NPT document because it expressed concern about military activities near Ukrainian nuclear power plants. The BWC is due for its ninth five-year review at the end of November. Russia may once again use this review conference to further its false narrative and block consensus on more-aggressive measures to discourage countries from developing biological weapons.

Russia's exploitation of these vital international forums comes with real risk. As two scholars observed: “Russia's decision to trigger a special session of the Biological Weapons Convention now runs the risk of co-opting the treaty and using it as a platform to spread and legitimize disinformation.” Blocking international consensus on new measures to prohibit the development and use of biological weapons may lead some countries to develop bioweapons because the penalties for doing so are weak and they believe they can get away with it.

Blocking international consensus on new measures to prohibit the development and use of biological weapons may lead some countries to develop bioweapons.

Responsible nations could prevent Russia from undermining the international order in this way. A group of countries receiving U.S. foreign assistance via the Biological Threat Reduction Program has issued a joint statement stating that the assistance is “devoted exclusively to peaceful purposes; they have nothing to do with weapons.” Russia may, however, persist in calling for an investigation as outlined in Article VI of the treaty. If it does, parties could demand a standard of evidence required in a court of law and not allow unsubstantiated claims. Countries participating in these international forums could also counter the Russian claims and make their views clear in any final reports.

These steps could make it clear for posterity that only states that are international pariahs support Russia's disinformation efforts to justify its unprovoked invasion of Ukraine. Allowing Vladimir Putin's regime to use this false narrative to distract attention from his imperial invasion could risk setting a precedent that other rogue regimes may follow.

John Parachini is a senior international and defense researcher at the nonprofit, nonpartisan RAND Corporation and a member of the Pardee RAND Graduate School faculty.