Should Greenland and Denmark Become Part of NORAD? 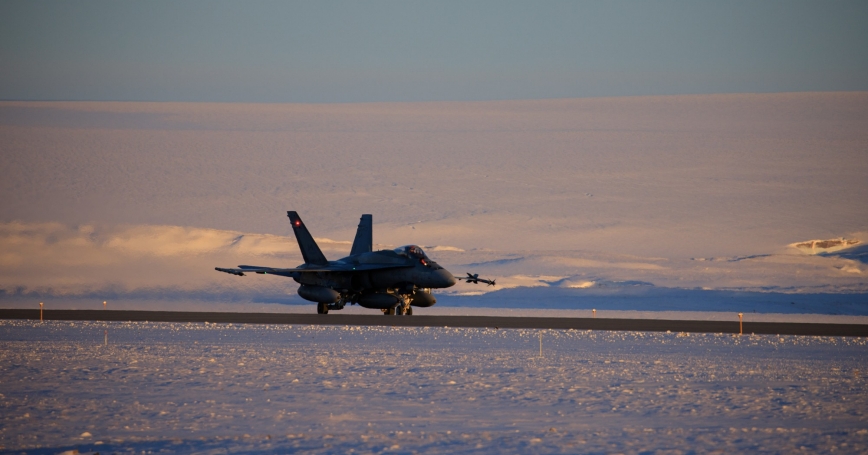 by Michael Bohnert and Scott Savitz

As tensions with Russia rise to levels not seen since the Cold War, the North American Aerospace Defense Command (NORAD) may need to detect and counter increasing numbers of aerial intrusions. One way to strengthen NORAD's capabilities: Invite Greenland and Denmark to join the command, reflecting the fact that Greenland is a strategically integral part of North America, and Denmark has sovereignty over it.

Although NORAD's name encompasses the entire continent, its membership does not. Since its founding in 1958, it has been a binational command, consisting solely of U.S. and Canadian forces. Since the shortest airborne routes from Russian, Chinese, or North Korean territory to North America transit Arctic and sub-Arctic areas, those more directly northern routes have always been particularly important to NORAD.

However, the North American Arctic includes three nations, not two. As trivia buffs know, Greenland is the world's largest non-continent island at over 830,000 square miles, but it is also part of North America—just as Japan is part of Asia, even though it consists entirely of islands. From a military perspective, Greenland dominates the northeastern approaches to the continent. NORAD nations have long recognized the criticality of Greenland, which hosts a U.S. airbase in Thule, as well as various smaller facilities and radars. Furthermore, the Danish, U.S., and Canadian militaries—along with other NATO allies—routinely exercise together across all three nations in the North American Arctic.

NORAD nations have long recognized the criticality of Greenland, which hosts a U.S. airbase in Thule, as well as various smaller facilities and radars.

Greenland, though, is often seen as an extension of Europe, rather than a part of North America. U.S. military operations in Greenland are overseen by the U.S. European Command (EUCOM), rather than the U.S. North American Command. This partly reflects Greenland's maritime importance to EUCOM: Russian ships and submarines entering the North Atlantic need to transit the Greenland-Iceland-United Kingdom Gap, a natural chokepoint for detecting and tracking them. Regardless of the fact that U.S. military activity in Greenland is under EUCOM's authority, though, the island could be brought under the NORAD umbrella.

Further formal integration could enable greater resource sharing, enhancing the early-warning capabilities of the United States and Canada while providing Danish forces with expanded access to NORAD data. This could improve the security of all three nations, without requiring additional forces or bases.

The case for discussing the inclusion of Greenland and Denmark in NORAD now is supported not only by Russia's aggression, but by the political momentum it has generated. Canada and Denmark have just settled a minor boundary dispute in the far reaches of the Arctic, compelled in part by recognition that they need to focus on far more important issues in the wake of Russia's invasion of Ukraine. Now that Sweden and Finland are in the process of joining NATO, all of the Arctic nations except Russia will be a part of that alliance, strengthening NATO's Arctic focus and its interest in military integration across that region.

Incorporating Denmark and Greenland into NORAD also may have a strategic benefit regionally. Although Greenland is highly autonomous (Denmark primarily controls security and foreign affairs) and economically dependent on Danish subsidies, many Greenlanders are interested in pursuing full independence.

The move by NORAD could demonstrate to Greenlanders their importance to the United States and Canada, as well as provide them with greater visibility regarding the costs of defense if they do achieve independence. This is particularly important because the Greenlandic independence movement is at risk of being exploited by China and/or Russia as part of broader great-power competition. Chinese and Russian interest in Greenland partly reflects eagerness to exploit its fish and mineral resources, but also a desire to gain political influence over the island. In the event of Greenlandic independence, such influence could curtail NATO activity on the island or facilitate hostile intelligence collection, jeopardizing security both in North America and in the European gateway to the North Atlantic. Those threats diminish if Greenland is already joined at the strategic hip to its Western neighbors.

Chinese and Russian interest in Greenland partly reflects eagerness to exploit its fish and mineral resources, but also a desire to gain political influence over the island.

Internationally, integrating a key ally could signal to the world the resolve of the United States to honor its treaty alliances, as well as the United States' and NATO's intent to be a leader in the future of the Arctic. Such action could provide a counterbalance to setbacks in the Middle East and Southwest Asia, challenges to NATO in Eastern Europe, and increasing aggression and coercion in East Asia. Polling has shown that 69 percent of Greenlanders support greater cooperation with the United States, whereas only 39 percent support greater cooperation with China.

To be clear, there would be some costs and strategic risks. The United States and Canada may need to include Danish military personnel, and perhaps representatives of Greenland's autonomous government, at strategic NORAD facilities with access to information critical to the defense of the United States and Canada. Denmark may have to be willing to fund personnel to work at NORAD, as well as associated training and security expenses. Given the small populations of Greenland (56,000) and Denmark (5.5 million), all sides may question the risks inherent to sharing national security information, the addition of more locations in Greenland and Denmark as military targets, and the manpower and infrastructure costs of adding them to NORAD.

There would also be a need for increased telecommunication capacity and interoperability to enable Greenland and Denmark to join the existing U.S. and Canadian arrangement, which comes with its own price tag. However, if capacity upgrades in Greenland were paired with broader civilian telecommunication upgrades, those investments could provide benefits to Greenlandic communities that could help to maintain their pro-NATO orientation.

NORAD has ably secured North America against air and missile intrusions for over 60 years. As the renewal of great-power competition exacerbates defense challenges, expanding NORAD to include the third North American Arctic nation could enable it to better fulfill its mission through enhanced collaboration. By encompassing the entire northern approaches to the continent, NORAD could help to better protect the nations of North America from external threats.

Michael Bohnert is a licensed engineer and Scott Savitz is a senior engineer at the nonprofit, nonpartisan RAND Corporation.

This commentary originally appeared on Breaking Defense on September 15, 2022. Commentary gives RAND researchers a platform to convey insights based on their professional expertise and often on their peer-reviewed research and analysis.