Russia's Su-35: Are Its Military Aircraft Exports Headed for a Fall? 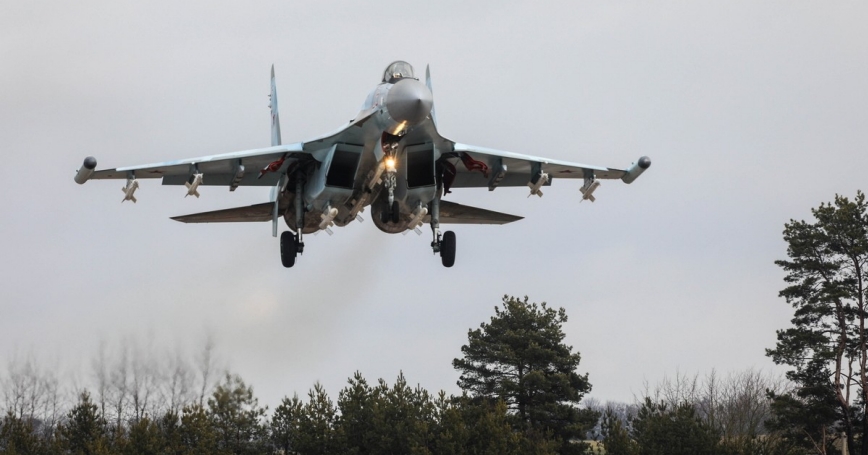 Russian Su-35 fighter aircraft taking part in an exercise after taking off from an airfield in Brest, Belarus, February 11, 2022

Photo by Ministry of Defense of the Russian Federation/Reuters

Before the invasion of Ukraine, Russia's aerospace leadership had planned to market the next-generation heavy fighter bomber, the Su-57, and its highly touted derivative the Su-75 to several foreign military buyers. These plans now appear to be in ruins.

The Su-57 suffers from a low production rate. Export models are unlikely to be available until the end of the decade. As for the medium-weight Su-75, the so-called “Checkmate” aircraft, it has been only realized in models and computer graphics. It's yet to have a single successful test flight

For foreign buyers, that leaves the Sukhoi 35 (Su-35), the only Russian military aircraft in serial production. This is Russia's signature heavy fighter bomber—although its combat record over the skies of Ukraine is mixed. But even the Su-35 might not be successfully exported in any significant numbers this decade.

Sanctions are crippling the Russian capacity to finish the development of, much less mass produce, next-generation combat vehicles.

Even before the Russian invasion of Ukraine, the Counter America's Adversaries Through Sanctions Act (CAATSA) was an important factor in deterring potential buyers of the Su-35 such as Egypt, Algeria, and Indonesia. To discourage countries from buying Russian weapons and deny Russia the revenue from those sales, Congress passed third-party sanctions legislation to require the executive branch to sanction them if they did. Several countries have cancelled contracts to buy Russian weapons and sought equivalent defense capabilities from other countries rather than face the prospect of U.S. sanctions.

Now the Ukraine war and ensuing sanctions are having a devastating impact on the Russian aerospace sector. Sanctions are crippling the Russian capacity to finish the development of, much less mass produce, next-generation combat vehicles such as the Su-57 and Su-75. Many Russian manufacturers depend on imported advanced machine tools. And analysis of the remains of Russia's missiles, drones, and aircraft downed in Ukraine has revealed that they contain Western components and subsystems that can no longer be legally exported to Russia.

Indeed, the military reputation of the Russian Aerospace Forces has been badly tarnished by its poor performance during the invasion of Ukraine—and that is rubbing off on the aircraft. Even with a clear numerical and quantitative superiority over the Ukrainian Air Force, Russia has failed to gain any measure of operational or tactical superiority over the battlefield from the air.

Furthermore, the military attractiveness of the Su-35 as a multi-purpose fighter bomber has been diminished since Russia has reportedly lost two squadrons in Ukraine due to various defects.

The military attractiveness of the Su-35 as a multi-purpose fighter bomber has been diminished since Russia has reportedly lost two squadrons in Ukraine due to various defects.

Both Ukrainian and Russian air forces have suffered fixed and rotary wing losses over a battlefield infested with a wide range of air defense capabilities. Less-expensive systems like artillery, missiles, and drones have proven to be the more-decisive weapons systems in the conflict. Reportedly, Russia traded more than 60 Su-35 to Iran in exchange for several thousand drones that they are now using to terrorize Ukrainian civilians and disabling elements of Ukrainian critical infrastructure.

Squeezed by sanctions and pressed to replace Russia's destroyed equipment, Russia's aerospace sector isn't likely to have aircraft to sell, even if it wants to. If purchasing countries start to change their minds—and invest in drones and other less-expensive precision guided munitions—the market for Russian combat aircraft might start to rapidly decline.

This commentary originally appeared on Defense News on October 20, 2022. Commentary gives RAND researchers a platform to convey insights based on their professional expertise and often on their peer-reviewed research and analysis.