America's Pacific Island Summit: The Good, the Bad, and the Ugly 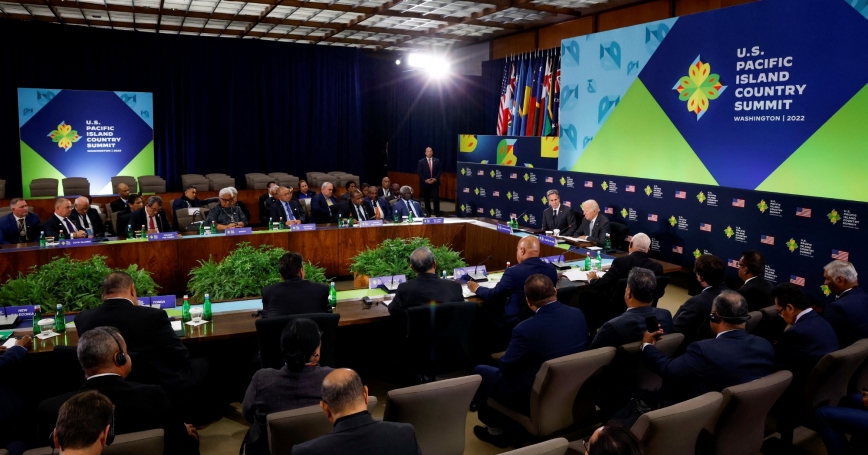 Within the context of intensifying U.S.-China great power competition globally, the Biden administration has continued in the footsteps of the Trump administration by strengthening regional engagement with Pacific Island countries. On September 28–29, the United States hosted its first ever Pacific Islands Summit at the White House. Pacific Island leaders and observers, hailing from over a dozen states, participated in the event and signed an eleven- point “Declaration on U.S.-Pacific Partnership” in which they pledged to jointly tackle various challenges such as climate change, economic growth and sustainable development, maritime security, and the pandemic.

This historic summit was hardly an absolute success, however, and should be put within its proper context. Indeed, there were good, bad, and even ugly takeaways that hold significant implications for American strategy in the region going forward.

Starting with the positives, the Summit put a necessary spotlight on Oceania—a region Washington has largely and lamentably ignored since the end of World War II. Prior to the event, U.S. policymakers primarily handled relations with Pacific Island countries (excluding Australia and New Zealand) bilaterally, and on an ad hoc basis. The closest Washington came to a multilateral summit of significance was when President Donald Trump, in May 2019, hosted the leaders of the three Freely Associated States (FAS)—Marshall Islands, Federated States of Micronesia, and Palau—at the White House.

Washington's latest summit was also a remarkable accomplishment because the Pacific Island participants agreed to the Declaration on U.S.-Pacific Partnership. By comparison, just a few months earlier, in May, Chinese foreign minister Wang Yi embarked on an unprecedented ten-day, eight-nation tour in which he attempted to convince Pacific Island counterparts to sign (PDF) Beijing's “China-Pacific Island Countries Common Development Vision”—a sweeping multilateral deal encompassing political, economic, and security issues. He returned empty-handed. Moreover, the Biden administration successfully lobbied the Solomon Islands—which in April inked a security pact with China—to go along with the rest of the summit participants and sign the Declaration after China language was omitted from the final text.

It was equally impressive that the Biden administration's Pacific Partnership Strategy (PDF), released at the conclusion of the summit, very consciously and specifically tracked with the region's 2050 Strategy for the Blue Pacific Continent—even to the extent of explicitly connecting the strategies on a point-by-point basis. The American strategy also clearly prioritized climate change, which is also one of the Biden administration's top priorities, stating “we have an interest in partnering with the Pacific Islands to drive global action to combat climate change.” Climate change presents an existential threat to Oceania, and thus, such language hits the mark.

Unfortunately for Washington, there were several negative outcomes from the summit as well. For example, although a majority of Pacific Island Forum (PIF) members attended the event, not all were present, leaving one to wonder whether the Declaration has any legitimacy in the region.

Within the Pacific, decisions are traditionally made through unanimous multilateral consensus. But, because Kiribati and Nauru did not send their leaders due to domestic elections, and Vanuatu—though a party to the Declaration—did not either, the PIF will likely have to determine how best to proceed, leaving the fate of the Declaration open-ended. (Although neither Australia's nor New Zealand's leaders attended, they are very unlikely to oppose the Declaration.) The Biden administration probably could have avoided potential problems down the line by simply waiting until all PIF members were able and willing to participate in the event. One well-known expert on the Pacific, Dr. Anna Powles, described the situation thusly: “The United States is strongly welcomed back in the region, but arguably the tempo by which the United States has pursued its reengagement in the Pacific is felt to be too rushed, too hurried.”

Indeed, the Biden administration's decision to host the summit was clearly a knee-jerk reaction to China's growing influence in the region. The trouble here is not simply that the United States sped up its reengagement to counter China, it is that Pacific Island states have consistently and explicitly voiced their concerns about inadvertently getting swept up in great power competition.

Although a majority of Pacific Island Forum (PIF) members attended the event, not all were present, leaving one to wonder whether the Declaration has any legitimacy in the region.

The Biden administration's initiatives—such as Partners in the Blue Pacific (Australia, Japan, New Zealand, the United Kingdom, and the United States) to assist Pacific Island nations in a variety of ways, the Quad (Australia, India, Japan, and the United States) to enhance maritime domain awareness, or others—reek of great power competition, which can cause the nations of Oceana to bristle in response. The Solomon Islands, for example, reportedly refused to sign the Declaration with China language included. Meanwhile, Fijian Prime Minister Frank Bainimarama tweeted that, “The Pacific needs genuine partners, not superpowers that are super-focussed [sic] on power.” His comments have real heft because Fiji is considered the traditional power center of the Pacific and is home to the PIF headquarters.

The Biden administration, for instance, announced that it had appointed an official to become the new special envoy to the PIF. Of course, it makes perfect sense for Washington, as a key dialogue partner, to deepen its engagement with the PIF. But prior to intensifying U.S.-China competition in the Pacific and worldwide, the United States did not believe there was a need to appoint a special envoy. Now it does. Pacific Island states probably see right through such decisions.

On the surface, the U.S. pledge to provide $810 million to the Pacific at the recent summit sounds great. However, if you break it down, $600 million was previously pledged by Vice President Kamala Harris when she addressed the PIF summit in July, and so the Biden administration is trying to take credit twice for something it has yet to accomplish. The money is also overwhelmingly tied to fisheries protection, particularly in support of the South Pacific Tuna Treaty that aims to counter expanding Chinese fishing in the region, and thus most of the funds won't address other pressing needs of Pacific Islanders. Finally, the funds would be spread out over ten years—$60 million per year, which sounds far more paltry—and subject to Congressional approval, meaning it may not even happen.

As if these troubles were not enough, there are deeper reasons the summit suffered. In the weeks before the event, for example, the Biden administration appeared to overlook inviting the Cook Islands and Niue, perhaps because they initially believed these states were not independent. While it is true that neither is a member of the United Nations, they are also fully sovereign states and members of the PIF. The only unique aspect to both is that they maintain compacts of free association—unique international agreements that outsource their foreign and security policies—with New Zealand. Although their citizens hold New Zealander passports, they do in fact maintain constitutional independence from Wellington.

Nevertheless, Washington lumped them in with New Caledonia and French Polynesia—a territory and special autonomous region of France respectively—which also did not initially receive invitations. In an apparent apology, the United States overcompensated by announcing at the summit it would officially recognize the Cook Islands and Niue as sovereign nations—something Washington should have already done long ago.

The awkward, untimely announcement also highlighted the uncomfortable reality that is the woeful American diplomatic presence throughout the Pacific. To date, Washington maintains embassies in only a handful of Pacific Island states, mainly in the South Pacific, which means that the two major embassies in the region—Fiji and Papua New Guinea—have to cover many other countries.

At present, the U.S. Embassy in Fiji, for example, is also responsible for Kiribati, Nauru, Tonga, and Tuvalu—which is more than 700 miles away. In her virtual address to the PIF, Vice President Kamala Harris noted that Washington would open new embassies in Kiribati and Tonga.

The U.S. Embassy in Papua New Guinea is also responsible for Solomon Islands and Vanuatu, but American representatives in Papua New Guinea have had very few discussions with Vanuatuan counterparts and have never even visited the country. In February, Secretary of State Antony Blinken pledged to reopen the U.S. Embassy in Solomon Islands after nearly 30 years, but by August, when Deputy Secretary of State Wendy Sherman and U.S. Ambassador to Australia Caroline Kennedy visited Solomon Islands to commemorate the 80th anniversary of the World War II Battle of Guadalcanal, the embassy had still not reopened.

Finally, in its joint statement with the Pacific Islands following the summit, Washington did not go far enough in apologizing to and compensating the Marshall Islands for its sordid Cold War nuclear testing legacy. From 1946 to 1958, the United States tested 67 nuclear bombs near Bikini and Enewetak Atolls, the radioactive fallout of which continues to impact the country's inhabitants in the form of health defects and cancer. Instead, the statement reads: “We, too, acknowledge the nuclear legacy of the Cold War. The United States remains committed to addressing the Republic of the Marshall Islands' ongoing environmental, public health concerns, and other welfare concerns.” This falls far short of the apology Marshall Islands seeks, and it could negatively impact renegotiation of the U.S.–Marshall Island Compact of Free Association, which affords the United States near-exclusive military access to the Marshall Islands and is thus a key enabler of major wartime operations in the Indo-Pacific.

The Summit has set the stage for a new era of intense American engagement with Pacific Island countries.

The U.S.-Pacific Islands Summit was, of course, a moment in time. Certainly, it is not the final word on American strategy in the Pacific. However, it did in many ways epitomize and exaggerate some of the strengths and weaknesses of U.S. strategy in the region. Either way, the Summit has set the stage for a new era of intense American engagement with Pacific Island countries, primarily—and for better or worse—with China in mind.

Going forward, Washington might consider keeping rivalrous behavior against China to a minimum, play a much better diplomatic game, acquire some real Pacific Island expertise within its ranks, consider additional funding and allocate it to projects that actually impact the average Pacific Islander, and respect and work through the PIF process. For the time being, at least, U.S. strategy in the Pacific leaves much to be desired.

Derek Grossman is a senior defense analyst at the nonprofit, nonpartisan RAND Corporation and an adjunct professor at the University of Southern California. He formerly served as the daily intelligence briefer to the assistant secretary of defense for Asian and Pacific security affairs at the Pentagon. This report was originally produced here (PDF) by Grossman as part his role as an Indo-Pacific Fellow with the Perth USAsia Centre.