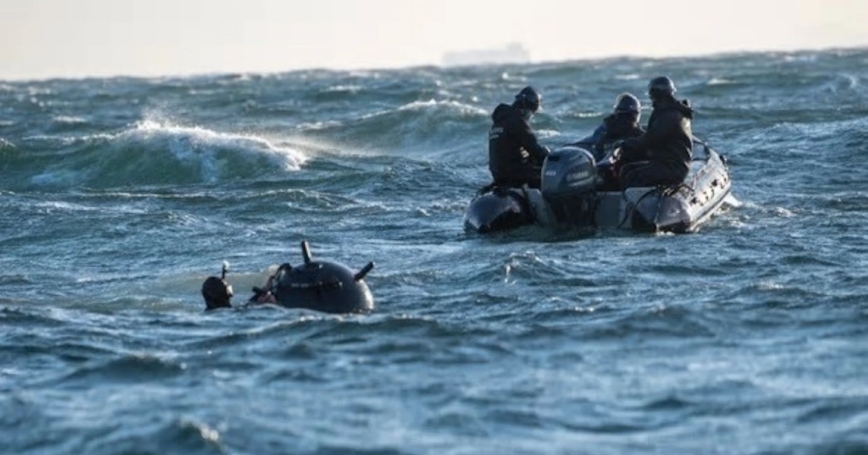 U.S. Naval Forces and the Japan Maritime Self-Defense Forces conduct a bilateral mine warfare exercise off the coast of southwestern Japan, January 28, 2021

Drifting mines have been found along the coasts of Turkey and Romania, as well as elsewhere in the Black Sea. Russia claims that they were anchored to the seabed but broke free of their cables due to bad weather. Ukraine insists that Russia deliberately released drifting mines.

Either way, in a confined body of water like the Black Sea, drifting mines can recirculate to pose an enduring threat to regional shipping. An Estonian cargo ship in the Black Sea has already been sunk by a mine during this war, though it's unknown whether the mine was fixed or drifting. Moreover, this threat is not limited to the Black Sea: over the last several years, Yemen's Houthi rebels periodically have released drifting mines into the Red Sea, one of the world's most important maritime thoroughfares. Drifting mines have long been used in confined bodies of water. The first-ever naval mines were improvised drifting mines used by American rebels during their war of independence, targeting British ships in the Delaware River.

The use of these weapons is theoretically constrained by international law: the Hague Convention of 1907, which Russia signed, forbids the use of drifting mines unless they become harmless within an hour of release. It also requires that moored mines be designed so that they become harmless if they break free of their cables. If Russia has violated this treaty, it isn't the only nation to do so: China has overtly manufactured drifting mines and composed legal guidance disregarding this part of the Hague Convention. Moreover, rebels and terrorist groups like the Houthis are under no such treaty restrictions.

The Hague Convention of 1907 forbids the use of drifting mines unless they become harmless within an hour of release.

There are several reasons why various actors use drifting mines in preference to fixed mines. One is to “toxify” the waterspace where other nations' vessels are operating, creating distributed risk that is not confined, as a fixed minefield is. Another is to jeopardize ships that are downcurrent of territory they control. This is one reason why they are particularly attractive when one combatant controls part of a river. For example, the Allies released drifting mines along the upper Rhine early in World War II, allowing them to drift into Germany. A third reason is to create mine risk in environments where fixed, explode-in-place mines are not viable. China might, for example, seek to use drifting mines to target U.S. fleets operating in the extremely deep waters east of Taiwan and Japan. A fourth reason is that they can be used to target mine countermeasures vessels that are trying to clear fixed minefields, delaying and disrupting clearance. Finally, attribution of responsibility for drifting mines can be even harder than for fixed mines: the attacker never even needs to have been present in the area where damage occurred.

Drifting mines are extraordinarily hard for navies to counter, since most mine countermeasures capabilities are designed to counter fixed minefields. A traditional mode of countering drifting mines involves having sailors stand watch, scanning the waters around the ship. When they detect a nearby mine, the ship can turn to avoid it, use a water cannon to push it away, or try to sink or detonate it with gunfire. However, it is hard to spot a dark, semi-submerged object—especially at night, in foggy conditions, or in turbid waters. Moreover, if the mine's designers were clever, they will have adjusted its buoyancy so that it is entirely submerged beneath the surface, making it still harder to detect.

A lack of sightings can lead watchstanders to become bored and inattentive. Repeated false sightings of innocuous detritus can lead them to become complacent. Even once a mine is detected, accurately targeting a small, bobbing object is difficult, and multiple mines drifting near one another may overwhelm response capacity. Moreover, shooting a mine may not detonate or sink it, but perforate it just enough that it submerges a bit further, where it is less visible but remains a hazard.

The drifting mine threat is not going away: they are simple, effective weapons that are easily made and deployed even by actors with limited naval capabilities.

In past conflicts, ships were sometimes fitted with bow rakes and/or nets to catch mines and keep them from contacting their hulls. This kind of retrofit would impose delays and costs while making ships less hydrodynamic. Uncrewed aerial vehicles studded with sensors could fly around ships, detecting drifting mines that personnel on deck might miss. Alternatively, uncrewed surface vehicles (USVs) could drag nets to “harvest” mines for disposal. While the USVs might periodically strike a mine, they could be designed to be inexpensive and expendable. Inexpensive USVs could also roam immediately forward of ships, aiming to collide with any drifting mines before the ship itself did. A range of other tactics and technologies could be considered.

The most desirable approach of all is to prevent drifting mines from entering the water. However, releasing drifting mines is easy, and the main signature is a splash. They can be readily pushed off of almost any ship or pier, though a crane may be necessary to handle them in some cases. While it may be possible to detect and target some releases, the probability of entirely preventing them is very low.

The drifting mine threat is not going away: they are simple, effective weapons that are easily made and deployed even by actors with limited naval capabilities. While recent events have underscored this threat, it has been a recurring one for nearly 250 years, menacing ships from the waters off Korea to the rivers of central Europe. A holistic approach to tactics, enforcement, and technology development could help counter the threat and maintain future freedom of the seas.

This commentary originally appeared on RealClearDefense on November 16, 2022. Commentary gives RAND researchers a platform to convey insights based on their professional expertise and often on their peer-reviewed research and analysis.