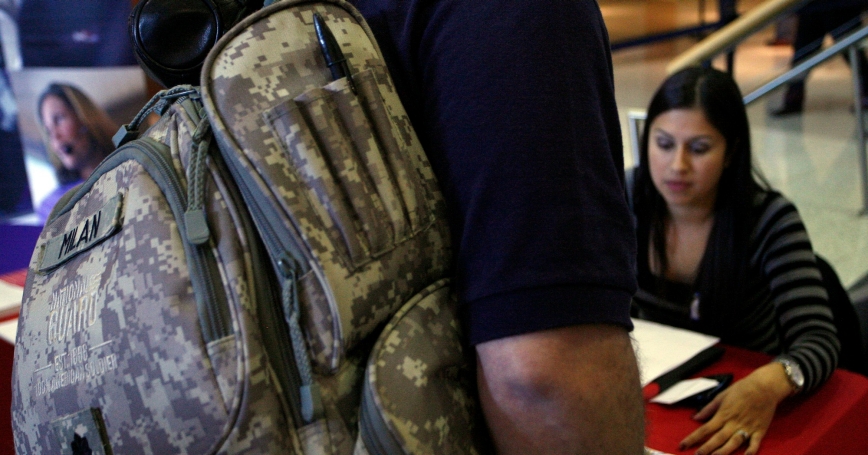 David Milan, a retired Lt. Colonel in the Army Reserves, waits to speak with a recruiter during a job fair in Naperville, Illinois, October 27, 2011

The Marines taught Damone Moore to hit a target at 500 yards, hold his breath underwater for a minute and a half, and drive a 9-ton armored truck under fire—none of which helped much on a recent morning, as he prepared for his first civilian job interview.

“Underwater egress training—when am I ever going to use that?” asked Moore, 22, as he gave his resume a final look. It was one page of service medals, certifications, and weapons qualifications. The objective at the top? Something in the medical field. Moore wants to become a nurse.

“And literally, I can't use any of it,” he said of his military experience. “It's just to show them I haven't been doing nothing. I know they're going to look at it and be like, I can't use any of this; but at least he's trying. That's what I hope.” 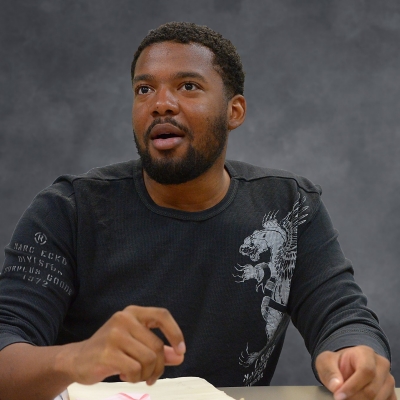 “I hope [employers] see that I can adapt. That's the greatest skill I got in the Marine Corps. I did everything.”

The plight of unemployed veterans like Moore doesn't get as much headline coverage as it did during the darkest days of the recession. Yet those who served during the wars in Afghanistan and Iraq continue to face stubbornly higher jobless rates than their nonveteran counterparts. Around 182,000 were out of work last year.

A growing body of RAND research has sought to identify what works—and what needs work—to get more veterans back on the job. RAND researchers even produced a guidebook for private-sector employers that translates common military experiences like boot camp into civilian job skills like “handles work stress.”

VIDEO: RAND convened a workshop connecting representatives from the Department of Defense, the Department of Labor, and Veterans Affairs with leaders in industry to address the challenges that remain surrounding veteran employment.

Tens of thousands of service members are about to enter the civilian labor force as the military contracts following more than a decade of war. There are challenges still, for them and for the employers who hire them, the RAND researchers found—despite the hard-earned “intangibles” that veterans bring to the corporate world like teamwork, leadership, and staying cool under pressure.

“That's what really sets veterans apart,” said Anthony Odierno, executive director of military and veterans affairs at JPMorgan Chase & Co. An Army captain, he was wounded in an ambush during a nighttime patrol in Baghdad in 2004.

“My soldiers, despite everything going on, knew exactly what to do,” Odierno said. “When you think about having to lead under such circumstances, make decisions under the most strenuous and stressful conditions, be able to react—these are all things that translate; these are all skills we're looking for as a company.”

JPMorgan and ten other corporate heavyweights came together in 2011 and pledged themselves to what seemed an ambitious goal: Hire 100,000 veterans before the year 2020. They called their campaign the 100,000 Jobs Mission, but that soon became a misnomer. At last count, the fast-growing coalition had placed more than 267,000 veterans in jobs.

As the effort grew, JPMorgan brought in RAND to assess the lessons learned and the challenges that remained. RAND found that, in many ways, the 100,000 Jobs Mission had become a model of success for putting veterans to work. 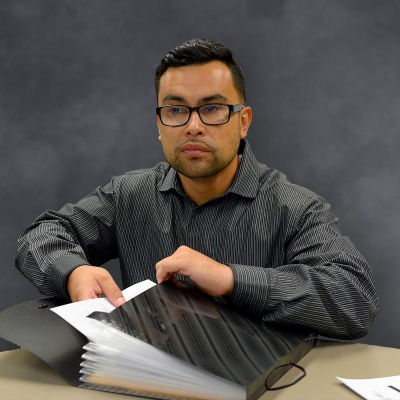 “[Many employers] somehow don't see the military experience as experience. They look at it like, OK, it's military, it's different.”

Companies more accustomed to fighting each other for top talent were suddenly cooperating to match veteran applicants to jobs, swapping tips and resumes. In interviews with RAND researchers, company officials were universally positive about the program and the veterans they had hired. Fewer than a quarter cited any downside—mostly an occasional veteran who couldn't acclimate to their corporate culture.

But even here, with company officials and resources fully devoted to the cause, the RAND researchers still found room for improvement. “These are all companies that are wholeheartedly committed to veteran-employment efforts,” said Kimberly C. Hall, a policy analyst at RAND and lead author of Veteran Employment: Lessons from the 100,000 Jobs Mission. “And even these companies that are trying so hard are still having challenges.”

For one thing, almost none of the companies tracked veteran employees after they were hired. Only two of the 26 companies that RAND surveyed kept any kind of numbers on the job performance of the veterans they hired; both said veterans generally scored higher than their civilian colleagues in performance reviews and promotions.

The rest of the companies relied on anecdotes to say their veterans had been good hires, RAND found—a crucial weakness when making the business case to hire more of them. Following RAND's recommendations, several of the companies have started to look for ways to better measure veteran performance.

The RAND study also found that veteran applicants still sometimes have trouble translating their military skills into civilian job requirements. All of the companies it surveyed had recruiters who knew how to read a veteran's resume—but that resume might later land on the desk of a middle manager who couldn't tell a captain from a corporal, and then in the wastebasket.

That was what worried Blanca Flores. She served more than a decade in the Army and then spent months trying to put that experience into the right words on her resume. She had been a staff sergeant—would that be a shift supervisor? Team leader? With years of administrative experience, all of it military, she was applying for entry-level office jobs just to get a foot in the civilian door.

“There's so much out there, and so many people willing to help and hire vets.” 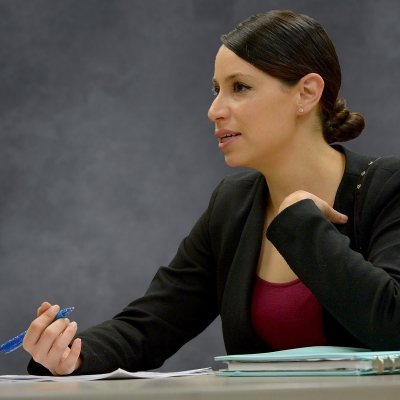 “You know what they say, sometimes you have to take a few steps back to take a few steps forward,” Flores, 29, said as she waited for the doors to open at a veterans job fair near Los Angeles earlier this year. But she was quick to add: “There's so much out there, and so many people willing to help and hire vets.”

What should give veterans like Flores a leg up, a separate RAND report released this year concluded, are their “soft” skills—things like decision-making, persistence, attention to detail. Yet those are the very skills that can get lost in translation between base and boardroom.

To remedy that, RAND researchers created a prototype guidebook to introduce hiring managers to the skills taught—sometimes with live-fire intensity—in common military courses. Applicants who've been through basic training, for example, have been trained to handle stress, work as a team, and pay attention to details as small as the sheet corners on their beds, the guide notes. Midlevel sergeants have trained, in the classroom and in the field, to be decisive and manage the work of others.

The employment gap between veterans and nonveterans narrows with age, a 2014 RAND study found. That suggests veterans need more time to find a job—maybe because they hit the job market cold, straight out of the service—but are not inherently disadvantaged once they do, the report noted.

In interviews, the company officials recruiting veterans through the 100,000 Jobs Mission kept coming back to the same theme. As Sheri Ryan, the senior director of talent acquisition at founding member Broadridge Financial Solutions, put it, “I just think it makes sense.”

The companies are optimistic. Earlier this year, they increased their goal—to 300,000 jobs.

And Moore, the young veteran with dreams of becoming a nurse? Like any good Marine, he had a plan: Work a few years in security while he goes to school to learn nursing. If the Marines had taught him anything, he said, it was to find a way.

“They call us 03-everything,” he said, a play on the job code for infantry in the Marines. “I hope [employers] see that I can adapt. That's the greatest skill I got in the Marine Corps. I did everything.”

Charles Zwick was a researcher at RAND from 1956 to 1965 and director of the U.S. Office of Management and Budget under President Lyndon B. Johnson. Later, he served as a RAND trustee; today, he remains an advisory trustee. His generous $1 million donation to RAND enabled RAND president and CEO Michael D. Rich to create the Zwick Impact Fund, which helps our researchers' efforts to extend the impact of their policy research.

The 100,000 Jobs Mission—a private coalition of more than 200 companies from almost every industry in the U.S. economy—has already exceeded its goal to hire 100,000 veterans by 2020: As of August 2015, more than 267,000 had been hired. RAND was engaged by one of the coalition's cofounders to capture the lessons and experiences of coalition efforts to provide veteran employment opportunities—what went right, and what could be improved.

Using Zwick Impact Funds, the project team at RAND is sharing these insights with a broader array of government and other stakeholders, including the U.S. Department of Labor, the U.S. Department of Defense, and the private sector. The funding allowed RAND to host a workshop in May 2015 that brought together representatives of the military and the private sector for roundtable discussions on the challenges still facing veterans in the civilian workforce, and possible solutions.