The Case for Correctional Education in U.S. Prisons 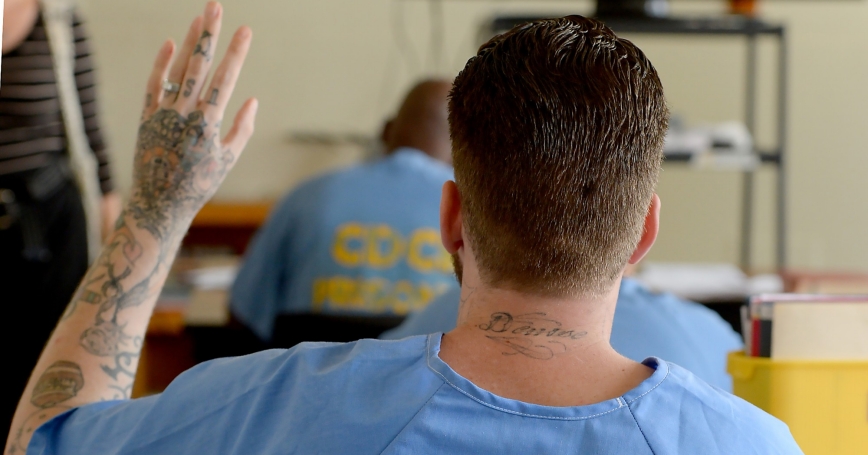 A student raises his hand during a class at the California Institution for Men in Chino, California

Donald Daniels passes beneath a wooden sign on his way to class every morning, its surface chipped and scratched with graffiti. Its message, in all-capital letters, could have been the title of a recent RAND report that helped shift the very foundation of criminal justice reform efforts. “EDUCATION,” it says, “KEY TO THE FUTURE.”

Daniels is an inmate at the California Institution for Men, a sprawling prison complex about 35 miles east of Los Angeles. He's 49 years old, a prison veteran with 14 felony convictions on his record. His latest offense, for making criminal threats, helped land him in one place where RAND's study showed he stands a good chance of turning his life around: a prison classroom. 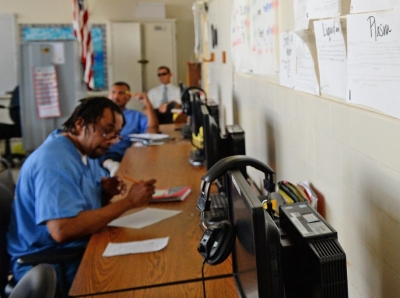 Donald Daniels (left) spent the last 29 years in and out of prison. He now makes every minute count in prison school.

Inmates who participate in any kind of educational program behind bars—from remedial math to vocational auto shop to college-level courses—are up to 43 percent less likely to reoffend and return to prison, the study found. They also appear to be far more likely to find a job after their release, and the social stability that comes with it.

For Daniels, something clicked in the basic-education prison classroom where he spends every afternoon; as evidence, he produces a red file folder stuffed with his schoolwork—“in which I'm getting A's!” He speaks with the zeal of a new convert about finally getting his GED.

Inmates who participate in any kind of educational program behind bars are up to 43 percent less likely to return to prison.

“I'm tired of society looking down at me,” he says. “I knew that I had to begin doing something different with my life. What I had been doing wasn't working. Education was the peek in the door that opened up my mind.”

A few numbers underscore the impact and importance of RAND's findings:

More than 2.2 million people were locked up in American prisons or jails in 2013, the most recent year for which data are available; that's more than the state population of New Mexico. They are more likely to struggle with reading, to have learning disabilities, to have broken work histories and fewer job prospects. Around a third of all state prisoners never graduated from high school.

And every year, more than 700,000 state and federal prisoners are released back into their communities, often with no greater life skills than they had when they went in. The result: Around 40 percent of them commit new crimes or violate their parole, and find themselves back behind bars within three years of walking free.

RAND's study, the largest of its kind ever undertaken, reviewed decades of research on correctional education and outcomes. It showed that education works regardless of the education level of the inmates, from those needing the most basic reading and math skills to those studying for college. It also showed that it was education itself—rather than something inherently unique about the inmates who enrolled—that made the difference.

“It really, for the first time, dispelled the myths about whether or not education helps inmates when they get out,” said Lois Davis, a senior policy researcher at RAND who led the study. “Education is, by far, such a clear winner.”

“Regardless of what you think about inmates, what do you want for your community?” she added. “You have to understand that they all come back eventually. If you don't rehabilitate them, how are they going to successfully rejoin society?” 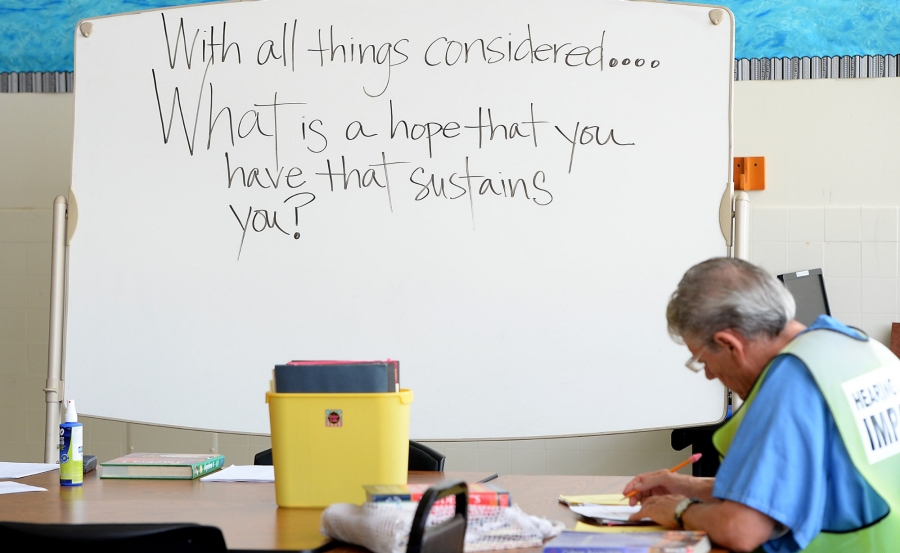 RAND's findings were so conclusive that they helped refocus the national debate over prison reform, from questions of whether correctional education could play a role, to how best to expand that role. State and federal correctional leaders, reform advocates, and editorial writers have since pointed to the RAND study as they call for more educational opportunities for inmates.

RAND's findings were so conclusive that they helped refocus the national debate over prison reform.

Arne Duncan, then U.S. Secretary of Education, cited the RAND research last year when he announced a pilot program to restore Pell college grants for some prisoners. Congress had banned prisoners from receiving the grants during the get-tough prison reforms of the 1990s.

“The current system works for no one,” said Glenn E. Martin, who earned his associate's degree while serving six years in New York state prisons for armed robbery. He became a national spokesman for prison-reform efforts when he got out, founded a group called JustLeadershipUSA that seeks to halve the national incarceration rate, and recently met with President Obama to discuss prison reform. “Government has a responsibility to do more of what works,” he said, “and less of what doesn't.”

Terry Keller just wants his GED. He sits near the front of the same basic-education classroom at the California Institution for Men, where Donald Daniels spends his days. Keller—a wiry spark of a man, always quick with a hand when the teacher poses a question—is serving a three-year sentence for dealing cocaine. 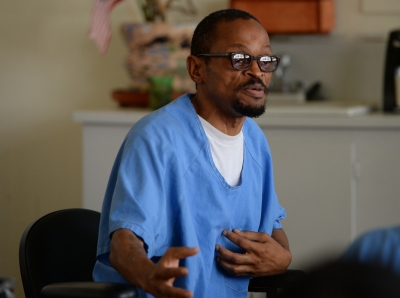 Terry Keller is one math test away from getting his GED.

“I chose as a grown man to sell dope,” he said during a recent class. “If I wait for someone to give me [something else] to do, I'm going to be here forever. I have to go within myself and say it's time to start being a man. I take it upon myself.”

He boasts that he has never missed a class, that he's one math test away from getting that GED. “It means strength, respect—self-respect, you know?” he says.

Keller is 51 years old. Until now, he barely had an eighth-grade education. His story is not at all unique inside the American prison system. Research has shown that minorities, and especially African-American men like him, are vastly overrepresented in underperforming schools, dropout rates, suspension and expulsion statistics—and prisons.

That puts prison education programs in a unique position to make up for some of those disparities, to offer a second chance to inmates like Keller. “We've kind of failed them on the education piece, on the front end,” RAND's Davis said. “Once they're in the system, let's address that.”

America's support for correctional education has historically climbed and crashed as society's attitude toward prisoners swung between two extremes: reform-and-rehabilitate, or throw-away-the-key. Prison experts say we are in the midst of one such shift, as the tough-on-crime policies of the 1990s give way to a greater push for education and other programs to help prisoners reenter society. 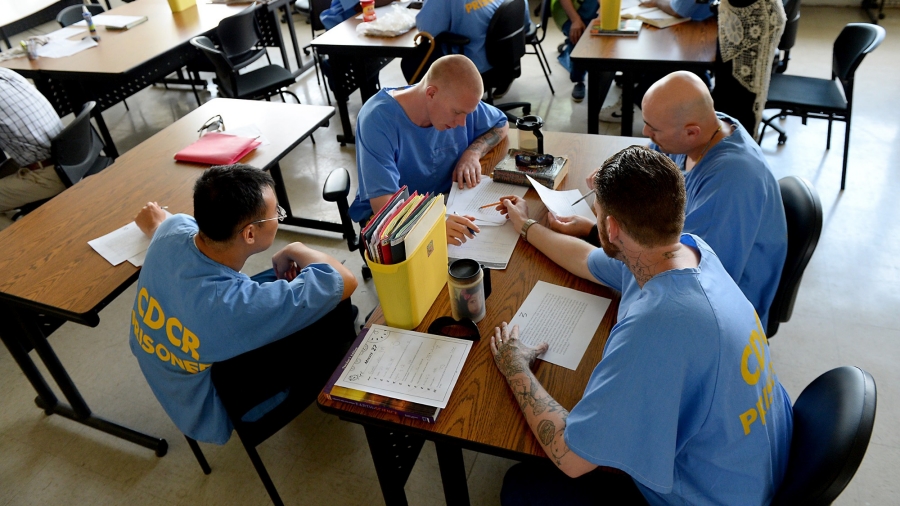 The recession squeezed prison budgets, and educational programs in particular. As part of its analysis, RAND surveyed correctional education directors in almost every state and found that most had cut their education budgets—in some cases, by more than 20 percent. A majority of the states had fewer teachers on prison payrolls, fewer courses on offer, and fewer students taking classes.

Even as the recession ebbs, financial concerns continue to haunt efforts to reform prison education. New York Governor Andrew Cuomo had to back away last year from a proposal to provide college courses in state prisons after legislators rebelled, in part over the cost. The Obama administration's push to reintroduce Pell grants for some prisoners was met by a bill in Congress, the Kids Before Cons Act, to block it.

“This is spending money that we don't have,” said New York Congressman Chris Collins, the bill's sponsor. He said he supports GED classes and vocational training in prisons, but not “willy-nilly” college courses. “We don't have enough money to pay today's bills,” he added, “let alone the president's trial program.” 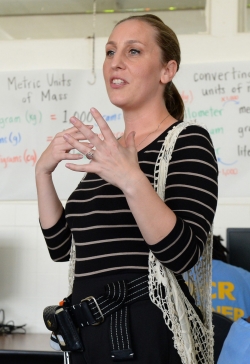 Sara Spencer considers her classroom sacred ground, a place apart from the tough realities all around it.

Sara Spencer teaches basic adult education in Classroom 4 at the California Institution for Men, where both Donald Daniels and Terry Keller spend their afternoons. She considers the classroom sacred ground, a place apart from the tough realities all around it.

She knows that none of her students would likely choose to be there, learning algebra and social studies behind the walls of a prison. But she runs her classes with the passion of a true believer that education can open minds and change lives. “My job isn't to punish them,” she says. “My job is to help empower them.”

She posed a question to the class on a recent afternoon: “What is human nature?” Donald Daniels sat up with an answer.

“Humans were born with choices,” he offered, as other students in the class nodded. “My choices have led me to this place for the past 29 years, in and out.

“Do I want to keep surviving, or do I want to live? Now I realize that I'm in a place to have that choice. If I want to keep going down a dead-end street, then I'm going to get to a dead end.” 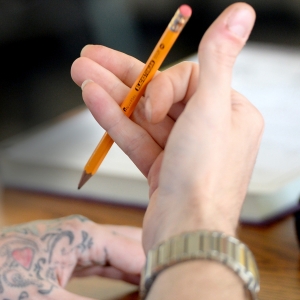 Donor funding enabled researcher Lois Davis to expand the reach of her study on correctional education by engaging with policymakers, media, and others with a stake in prison reform. Based partly on RAND's report, in late 2014, California adopted legislation that allows community colleges to receive funding for prison courses. The U.S. Department of Education also cited her findings when it launched a pilot program to extend Pell college grants to some prisoners.