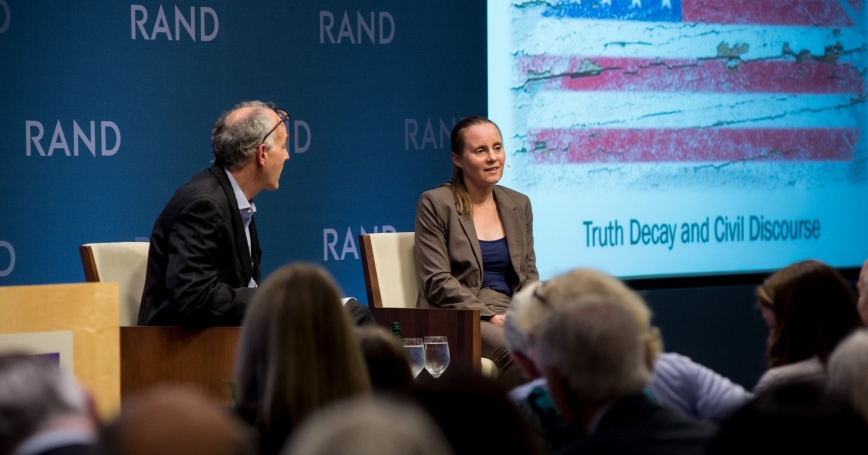 Senior political scientist Jennifer Kavanagh helps lead RAND's work on “Truth Decay,” the diminishing role of facts and analysis in American public life. Her research has helped set a national agenda to better understand and combat the problem, to explore its historical precedents, and to mitigate its consequences. Kavanagh also serves as director of the Strategy, Doctrine, and Resources Program within RAND Arroyo Center, the U.S. Army's sole federally funded research and development center for studies and analysis.

You recently looked at how journalism has changed over time. What did you find?

We looked at how print and broadcast journalism has changed since the 1980s, and then compared broadcast and cable since 2000, and print and online journalism since 2012. What we found overall was a shift away from the traditional 'who, what, when, where, and why' to something that is much more subjective. It depends on which platform you're talking about, but there's more argumentation, more personal perspective, more advocacy, more conversation. It has the same basic information, just presented in a very different way.

Those changes are biggest when we compare across platforms—broadcast to cable, print to online. The changes for newspapers have been pretty small; for broadcast, a little bigger but still small compared with these cross-platform changes.

Is journalism today less factual than it was in the past?

If you're considering the full range of journalism options that we have, we have more choices and different types of information. And some of those forms do tend to have less fact-based information and more opinions and arguments. If you're choosing to read only online journalism, then you're getting something that looks different than newspapers, for example. So is journalism less fact-based? Maybe overall, but only because we're looking at these many different types of platforms, which vary in how they present information. But sources like newspapers and broadcast television haven't changed much and have essentially the same amount of facts as ever.

A frequent criticism of the media is that it has lost its objectivity. Does your study support that?

No. Criticism of media tends to focus on major newspapers, broadcast television, and cable. For broadcast and newspapers, we have actually seen only minor changes. Yes, there was a shift in print journalism from a more straightforward, event-based presentation of news to something that is more narrative, and in broadcast toward something more subjective. But those changes have been pretty small. Cable is probably the most subjective and filled with the most personal perspective, opinion, and argumentation, but their model is to appeal to niche audiences who have specific preferences.

How does this fit into your research on Truth Decay?

I'm trying to be more conscious of the need to reach outside and get other perspectives, even when I know I'm not going to agree.

Our earlier research laid out a framework for understanding Truth Decay, and as part of that we tried to identify what's driving it. One of the drivers is changes in the information environment. We all have a sense that the presentation of news has changed, but we really wanted to measure what has changed. That's really key to understanding the evolution of Truth Decay, and then figuring out what to do about it.

How were you able to measure what's changed?

We collected text data—whether that's text from newspapers or transcripts from television—and we ran it through a text-analysis tool called RAND-Lex. It allows us to look at 121 linguistic characteristics of a given text—emotion, personal perspective, subjectivity, uncertainty, things like that. We can compare two sets of data and see whether there are meaningful differences across the two samples in linguistic characteristics. So, for example, we compared newspapers pre- and post-2000 and could assess whether there were significant changes across that divide in terms of how news is presented.

What's next in this line of research?

We have an upcoming study on the role that media literacy might play as a response to Truth Decay. We have another study looking at what media sources people use and how they view those sources. We're also looking at media governance—whether there are policy or regulatory mechanisms that could help us reduce disinformation. Regulation is often cast as “nothing” versus “Ministry of Truth,” but there's a whole range of gray, a range of options that could be acceptable, within the bounds of the First Amendment, that could help.

Has any of this changed how you consume the news?

Definitely. I've become really aware of how easy it is to get sucked into reading things that are aligned with what I already believe. I'm trying to be more conscious of the need to reach outside and get other perspectives, even when I know I'm not going to agree. I want to understand other points of view. I am also more attuned to 'When am I actually getting facts and when am I not?' There's no problem with reading opinion, but it's important to be aware of it.