How Pittsburgh Is Addressing Social and Economic Disparities 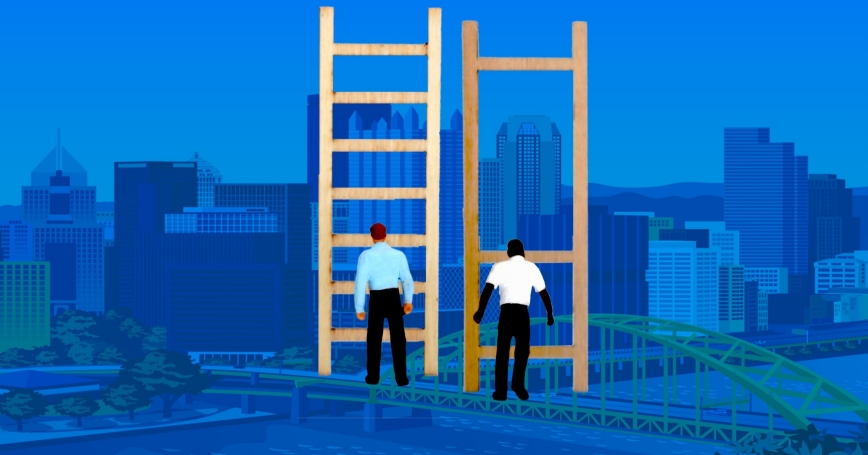 Being black in Pittsburgh, RAND research has found, means being six times more likely than a white person to go to bed hungry. It means bringing home less than half as much pay, and seeing your children hospitalized with asthma four times more often.

The city has been taking a hard look at race, wealth, and opportunity, in partnership with researchers at RAND's office there. It hasn't just run the numbers on subjects ranging from police contacts to business ownership to graduation rates; it has published them for all to see as part of a commitment to do better.

The results show what disparity looks like in one big American city. But they also provide a case study for other cities, of what they might find if they held up a mirror to their own promises of equity and inclusion.

“There are conversations about inequity happening all over the country,” said Linnea Warren May, a policy analyst at RAND who has led the work in Pittsburgh. “But how do you measure inequity? What are the critical systemic issues that contribute to it? Pittsburgh has this narrative of being a city on the rise, but there are still people being left behind.”

Pittsburgh has asked those questions before.

In the late 1900s, researchers fanned out across the city to document the deep disparities that separated rich and poor, new immigrant and native-born. They found steel workers putting in 12-hour days; children crowded into unlit, unheated classrooms; and poor sanitation marked by “indescribably foul” privies. Their study provided the foundation for years of reform. It became known as the Pittsburgh Survey.

“Distinction lies not in ostrich-like refusal to see” the hardships faced by so many city residents, its authors wrote, “but in statesman-like willingness to gauge them and to understand them, and so far as it is possible to remove them.”

What Pittsburgh needed was a way to not just identify disparities, but to show where it was making progress in fighting them, and where it was not.

Today, Pittsburgh ranks as one of the most livable cities in America, the Paris of Appalachia. Yet more than one-third of its black residents live in poverty. “Pittsburgh is a very hard city,” playwright August Wilson once said of his hometown, “especially if you're black.”

RAND researchers, working with the city to anticipate the challenges of the 21st century, put social inequality near the top of the list. What the city needed was a way to not just identify disparities, but to show where it was making progress in fighting them, and where it was not.

In 2015, New York City provided a template, an annual report on inequality. Data point by data point, it charted disparities across the city, comparing its least advantaged residents to its most advantaged. It looked at how many low-income residents lacked reliable heat, how many Muslim residents were hesitant to call the police for help, how many subway stations were not wheelchair accessible.

New York's report, developed by the City University of New York, assigned each of those indicators a score. Then it rolled up those individual scores into one final grade on equality that the city could track year to year. It earned a 43 that first year, on a scale where 100 would be perfect equality; its score has gone up a few points since then.

Pittsburgh was one of five cities chosen by the Rockefeller Foundation to adapt the New York model to their own communities. Each of the cities—Dallas, Oakland, St. Louis, and Tulsa, in addition to Pittsburgh—put its own stamp on the indicators it chose. Tulsa, for example, looked at how often its Native American residents were denied home loans. Dallas looked at how much more its black residents paid in municipal court fees than white residents.

Pittsburgh partnered with RAND to develop its indicators and run the numbers. The results underscored the city's black–white divide. Its top-level equality score was 55 in 2017, essentially an F-plus. The score didn't budge when researchers collected and analyzed the data again in 2018. But that masked some significant progress made, and lost, in individual indicators.

The graduation rate for black high school students went up, for example, adding ten points to the “student success” score. At the same time, though, black incomes fell, especially compared with white incomes, deducting ten points from the “income and poverty” score.

The indicators mostly focused on disparities by race—but not always. They showed, for example, that low-income neighborhoods had much higher rates of diabetes than high-income neighborhoods. Female high school students were somewhat less likely than their male peers to enroll in science, technology, engineering, and math programs.

“One report or one budget cycle will not undo decades of disinvestment and systemic structural barriers. This requires a sustained, community effort to improve.”

Taken together, the Pittsburgh indicators provide a proof-of-concept for other cities, RAND's Warren May said—that it's possible to track disparities across many fields in a way that is transparent and can help guide good policy. “There hasn't really been such a systematic look at equity” in Pittsburgh or other cities, she said. “Not something that takes it all together and tries to see the whole picture. Tracking these indicators is a good first step, but the results point to additional work we'd like to do to look at root drivers of inequity.”

The indicators have already had an impact in Pittsburgh. The city government plans to release millions of dollars for affordable housing and quality child care. It has launched a “Stop the Violence” initiative, taken steps to improve air quality, and required bias training for all police officers. Earlier this year, it announced the creation of an Office of Equity.

“We are using the Equity Indicators to begin to untangle the deep roots of inequality that exist in this city,” Mayor William Peduto said in a statement. “One report or one budget cycle will not undo decades of disinvestment and systemic structural barriers. This requires a sustained, community effort to improve.”

City officials have talked about taking a more neighborhood-by-neighborhood approach to measuring disparities, of zooming in on some of the most troubling indicators. They describe the two-year Equity Indicators project as one step in a much larger effort to assess the well-being of the city and its people, and from there to improve it.

Peduto, for one, has described that vision as a Pittsburgh Survey for the 21st century.