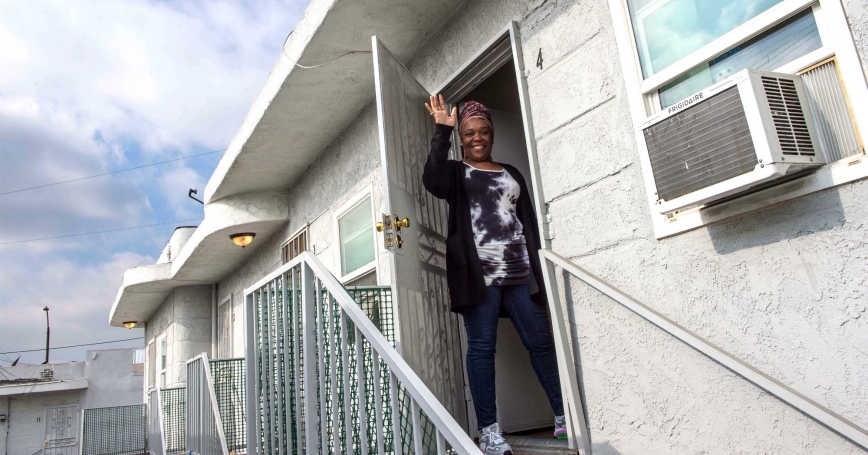 Tanya Beverly thought she could communicate with her television. She heard birds and dogs finishing her thoughts for her. One mistake, one bad decision to go without her pills, landed her in the Los Angeles County Jail. That's where her story begins.

Hundreds of thousands of people like her, with serious mental illnesses, cycle in and out of American jails every year. Sheriffs around the country have complained that their local lockups now double as psychiatric hospitals. By any number of measures—costs, health outcomes, recidivism rates—the system is a failure.

Researchers at RAND have been tracking a different approach in Los Angeles. The effort is still small, compared with the need, but it has helped several thousand people stay in treatment, in housing, and out of trouble. One of them is Tanya Beverly.

“If it wasn't for this program,” she says, “I pretty much would have been homeless, out on the streets, trying to find a shelter to go to.”

It's been decades since news exposés and popular portrayals like One Flew Over the Cuckoo's Nest helped inspire a national crusade to deinstitutionalize people with mental illnesses. Fewer than 40,000 people remain in state psychiatric hospitals today. Around ten times that many are in prison or in jail.

They are twice as likely as other inmates to have been homeless. Most have substance-use disorders in addition to their mental health problems. By some estimates, fewer than half get the psychiatric treatment they need behind bars. And when they get out, they are far more likely to commit another crime and cycle right back into the system.

Fewer than 40,000 people remain in state psychiatric hospitals today. Around ten times that many are in prison or in jail.

Communities nationwide have started looking for other options. Hundreds have pledged to do more to keep people with mental health problems out of jail as part of a campaign called Stepping Up. But what that should look like is still an open question.

“Our jails simply were not built as treatment centers and with long-term treatment in mind,” then–Los Angeles County Sheriff Jim McDonnell said in 2015, as county officials detailed a sweeping effort to change their approach. “For too long, jailing those who are dealing with mental illness has somehow passed as an acceptable way of keeping out of sight and out of mind human beings who need our help.”

On any given day, nearly a third of the people in Los Angeles County jails are in mental health housing units or taking psychotropic medicines—more than 5,000 people in all. One recent study, by the ACLU of Southern California, estimated that Los Angeles spends around $48,500 a year to treat an inmate with mental illness, versus around $38,000 for an inmate without.

As part of their work with the county, researchers looked at how many of those inmates could be diverted into supportive housing or community treatment programs. They reviewed criminal records, ruling out inmates with most serious felonies, and evaluated mental-health histories. They concluded that at least 61 percent would be appropriate candidates for diversion. Put another way: More than 3,300 people in the jail could be better served elsewhere.

Until a lucky break, Beverly was one of them. She's 52 now, with a history of schizophrenia that impacted her marriage and forced her daughter to grow up with other relatives. She doesn't like to talk about what happened when she tried to live without her medication and got arrested—she's adamant that it not define her—except to say nobody got hurt.

“I ended up doing something that I regret horribly,” she says, and leaves it at that. “I want to put it in my past and not have it brought up again. Try to have some closure, and get all that behind me.”

Her lucky break came in the form of a piece of paper slid across a table at the jail for her signature. She agreed to plead no contest to the charges against her; in return, the county released her into a supportive housing program where she could get the treatment she needs. 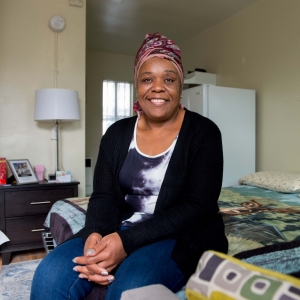 Tanya Beverly at her apartment in Los Angeles

The county has diverted more than 2,300 people from the jail through that supportive housing program since 2015. They include some of the heaviest users of county social services, people struggling with psychotic disorders, bipolar disorders, and other severe mental illnesses. Many would likely be homeless otherwise. The program is a calculated bet that getting them into housing and into treatment will stabilize their lives.

The county asked RAND to assess how well that bet is paying off.

Researchers analyzed the data on more than 300 people who were among the first to move from the jail into the supportive housing program. They found that 91 percent were still in stable housing after six months, and 74 percent were still there after 12 months. Around 14 percent had returned to jail with new felony convictions within their first year in the program. The 86 percent who didn't represented a significant—if early—victory.

“There's been some skepticism over whether this population can successfully live in the community and not just be cycling in and out of jail,” said Sarah Hunter, a senior behavioral scientist at RAND and a professor at the Pardee RAND Graduate School, who led the study. “This shows that there are, truly, many individuals who are involved with the criminal justice system who, with the right intervention, can live in the community.”

Her team is still following the program's progress, to see whether those outcomes hold. It also is taking a closer look at how much of the costs are offset by savings from moving people out of the jail. An earlier study led by Hunter found that a similar housing program for chronically homeless people saved Los Angeles County $1.20 in health care and social service costs for every $1 it spent.

For Beverly, the program was a turning point. She doesn't know where she'd be otherwise—on her own, in a shelter if she were lucky, struggling to keep the voices at bay. Instead, she lives in a studio apartment east of downtown Los Angeles, where she can cook her own meals, do her own laundry, and take her medicine twice a day. She keeps a book on her nightstand to remind her of where she's been and where she is now: A Bouquet of Beautiful Blessings to Warm Your Heart.

“I'm in a very good state of being,” she says. “I keep a journal, I read my affirmations in the morning, I try to keep myself busy. I only entertain good thoughts now, leave the bad thoughts alone.”