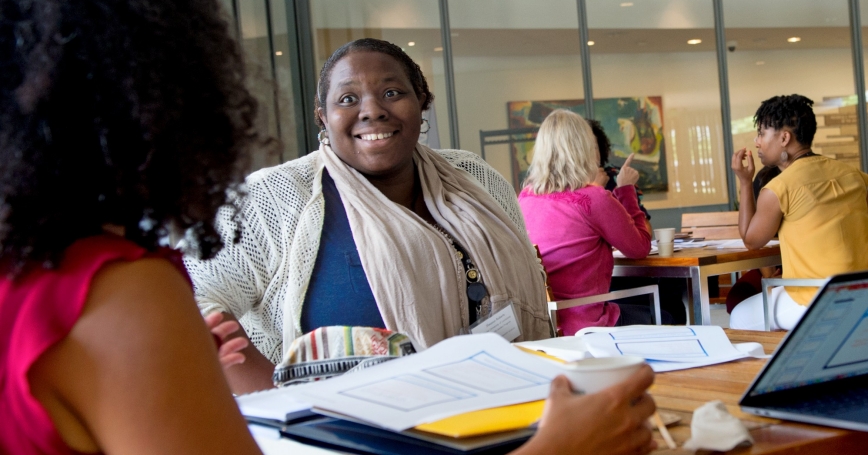 As a Black woman in academia, Shearon Roberts thought the rules seemed pretty clear. Don't get too close to your research. Don't make it personal. Don't speak out too loudly. That all started to change in one week at the Pardee RAND Graduate School.

For years now, the school has made a unique investment in the future of public policy. Every summer, it invites a small group of scholars to campus to learn and practice policy analysis. They come mostly from the professor ranks of colleges and universities committed to serving students of color.

The goal is to bring more people from more backgrounds into the historically monochrome field of public policy—the professors, and then through them, their students. The need is critical, as months of protests against systemic racism have shown. Public policy is where change happens; to be effective, it needs to better reflect the aspirations, lives, and perspectives of the people it serves.

For Roberts, an assistant professor of mass communication at Xavier University of Louisiana, the opportunity to share notes with fellow scholars of color changed how she thought about her role in the world.

“It liberated me, to be quite honest,” she said. “You're always worried, particularly as an academic of color, that if you're too outspoken it will affect your ability to be tenured, to be hired somewhere, to be published. I had to throw off some of that pushback I got in my first few years, to shift my thinking about what kind of academic I'd like to be.”

Susan Marquis had just become dean of Pardee RAND in 2009 when she looked around and realized something had to change. “It was clear we needed to do more to diversify our student body,” she said. Working with Sally Sleeper, then the director of the RAND Gulf States Policy Institute, she set out on a road trip through the South, to pin up fliers and meet with students at historically Black colleges and universities.

Midway through her first sales pitch, she could tell the students had heard it all before—just another graduate school looking to improve its diversity numbers. She stopped. “What can we do for you?” she asked. The answers were the same at every school she visited: Engage the faculty. Give them the tools to be more effective as scholars and teachers. Connect them with fellow faculty leaders around the country.

The goal is to bring more people from more backgrounds into the historically monochrome field of public policy—the professors, and then through them, their students.

Marquis had the program on paper by the time she returned from that road trip. It came to be known as the Faculty Leaders Program, and it brought its first class of fellows to campus in 2013. Since then, nearly 100 scholars have participated, drawn from 18 states and the District of Columbia, with academic backgrounds that range from water policy to feminist studies to education reform.

The school recruits applicants from historically Black colleges and universities, Hispanic-serving institutions, tribal colleges and universities, and regional universities that serve underrepresented student populations. It selects around a dozen fellows a year to spend one week at Pardee RAND in classroom courses based on the school's doctoral curriculum. Foundation funding and donor support covers their costs. Participants are required to bring at least one research idea with them to workshop and refine with fellow scholars and researchers from RAND and Pardee RAND.

Those ideas have led to projects investigating equitable discipline in schools, the quality of neighborhood food environments, and the effects of anti-immigration rhetoric. One program participant helped craft a bill to move juvenile defendants out of adult prisons in Louisiana. Another pushed for the creation of mental-health response teams in Mississippi.

Shearon Roberts looked at the uncertain status of Haitian migrants in the U.S. during her week at Pardee RAND in 2018. She left the program inspired by other Faculty Leaders to put more of herself into her research—to become, in her words, a “scholar-activist.” A specialist in the recent history of Haiti, she has since helped establish a Haitian community center in her hometown of New Orleans and fought to protect Haitian migrants from deportation.

“It made me wrestle with, 'What is the purpose of an academic?'” she said. “I'm not so guarded anymore about what I write about and how I approach research projects. I used to think I didn't want to have too many close relationships with the community. I would study them, but try not to get too involved. The program helped me see that it was OK to do more.” 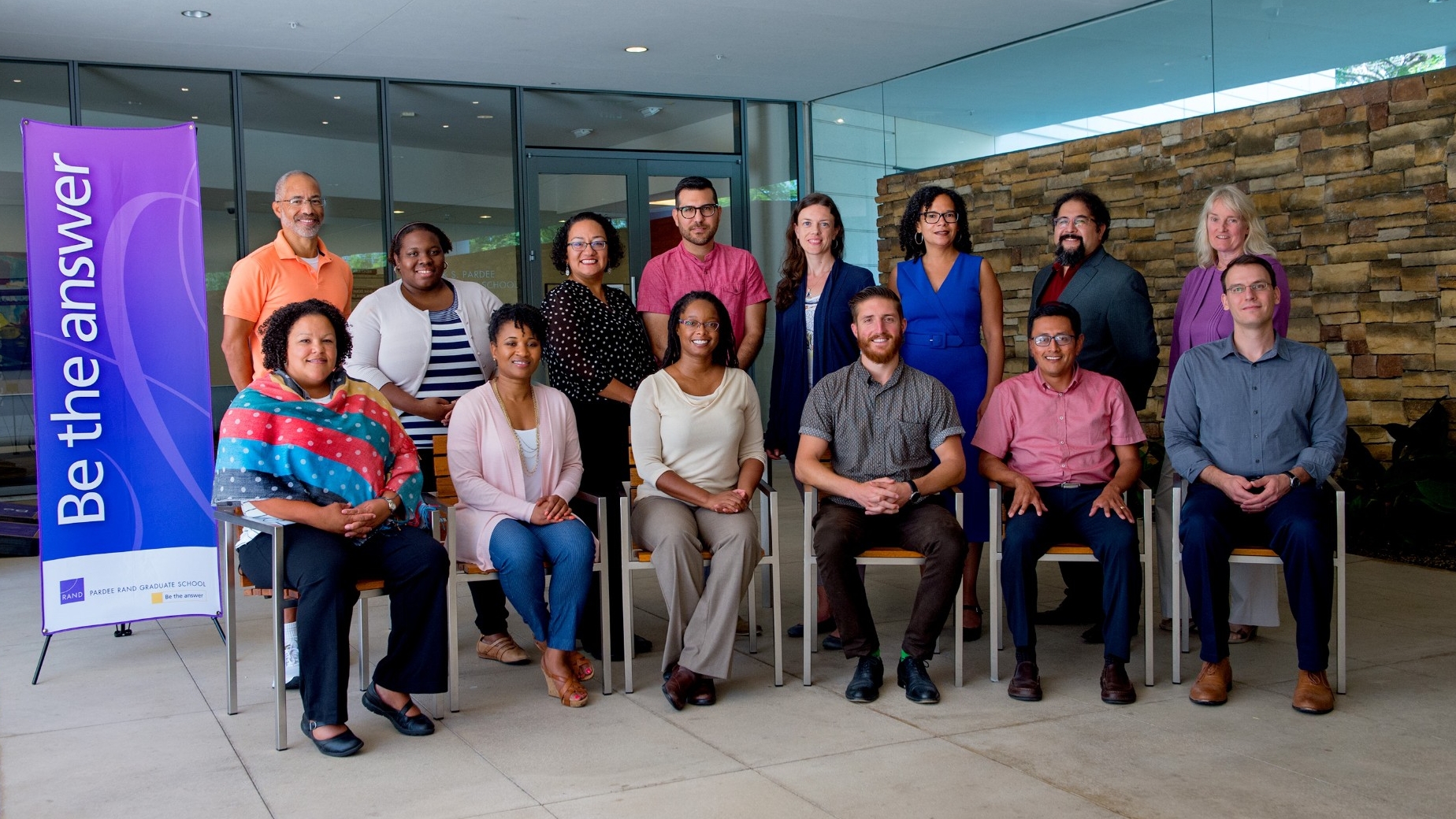 The 2018 cohort of Faculty Leaders with Shearon Roberts in the back row, second from the left

A recent survey of program graduates found that 70 percent had used what they learned to advocate for change in their city, state, or university. Nearly 85 percent said they had made changes to a course to add or incorporate policy analysis. And 87 percent said they had encouraged students to pursue policy-related advanced degrees since graduating from the program.

For Marquis, one other number stands out. In the past two years, Pardee RAND has accepted two students into its Ph.D. program who came from the classrooms of former Faculty Leaders.

70 percent of the program's graduates have used what they learned to advocate for change in their city, state, or university.

“We knew this was a new idea. Our Faculty Leaders have really helped us achieve our vision for what it could be,” she said. “It's a model that we hope gets replicated. There's plenty of room for other schools to take this on.”

Roberts has added policy analysis to her courses on mass communication and diaspora studies, and she's seen it make a difference. One student heading to medical school now plans to focus on health policy. A student in her communication course decided to go into public diplomacy.

She keeps in contact with her fellow Faculty Leaders, part of a growing national network of program graduates who share research ideas and day-to-day support. “We share the challenges of being one of the few [professors of color] in our institutions or of being from marginalized institutions,” she said. “Of trying to protect our livelihoods but still speak up for our own lived experiences. That's really been the most valuable part of this program.”

She's got a book coming out soon about the experiences of Haitian journalists after the 2010 earthquake that leveled neighborhoods and killed thousands. It was inspired in large part by her own experiences as a young reporter in New Orleans in the apocalyptic aftermath of Hurricane Katrina. She plans to give all proceeds from the book back to the Haitian community.

The program is now in its eighth year. The 2018–2019 Faculty Leaders Program was generously supported by the Henry Luce Foundation.