Rethinking How Police Respond to Homelessness 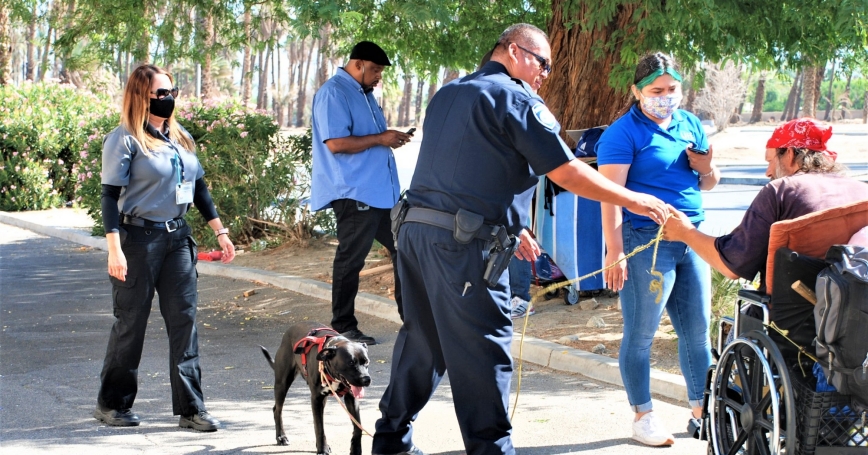 Police need better policies and partnerships to address a problem that has become theirs by default: homelessness. Many departments don't even have a working definition of what homelessness means, much less data on what works to get people off the streets.

Researchers brought together police leaders, experts, and outreach specialists to explore how police could better protect and serve people experiencing homelessness. They agreed that the old approach—telling people to move along and writing them tickets or putting them in handcuffs if they didn't comply—was a poor substitute for meaningful action.

But what should replace it? That question has mostly been left up to individual departments to solve, even individual officers, with few proven examples to guide them.

“As long as reimagining police and what police do is part of the national conversation, this topic will be part of it,” said Michael Vermeer, a physical scientist at RAND who helped lead the study. “Police are not going to solve homelessness. That's not their job. But they're the ones who are most often interacting with people experiencing homelessness, so we need to look at what they need to be more effective.”

Homelessness Is Not a Personal Failure

The man known as Jojo used to spend his days outside of a liquor store in the desert town of Indio, Calif., about 120 miles southeast of Los Angeles. It was easy enough to see him as just another lost soul, wasting his life on the sidewalk in between trips to the county jail. But something he once said—“Nobody understands; nobody cares”—stuck with Cynthia Ferreiro.

She's a clinical therapist who rides with the Indio police. She started stopping by the liquor store, talking to him, gaining his trust. She learned he had a long history of depression and was grieving the death of his mother. She made a few calls and got him into rehab.

“Now, three, four months later, he's still sober,” she said. “He's in a half-way home, not living on the streets anymore. Small steps, but he's living a better life at this point.” 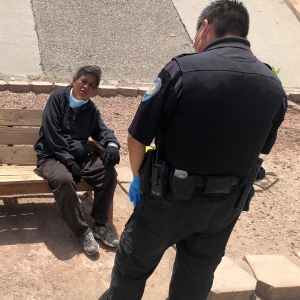 Gallup Police Officer J. Soseeah checks on the health of a woman in Gallup, New Mexico

Hers is a story from a new frontier in American policing. Not long ago, a majority of police leaders said their job, when it came to people experiencing homelessness, was mostly just to keep them off the streets and out of public view. Today, some communities are starting to confront homelessness as a societal problem, not a personal failure—and that means rethinking how police respond.

But the research that could guide those efforts is surprisingly thin. Plenty of studies have tried to get under the root causes of homelessness, and to identify solutions that could make a real difference to people who need it. But those studies have suffered from inconsistent definitions, inadequate data, and inconclusive results.

Researchers at RAND have worked for years with the Police Executive Research Forum to recommend ways to improve criminal justice in America. Their approach is straightforward: Get people who know the issues into a room and have them talk through potential solutions. They convened a two-day workshop on homelessness and came away with more than three dozen needs and strategies to make the police response safer, more humane, and more effective.

Those include developing better policies on such fundamental questions as how to clear encampments and how to keep officers safe. But workshop participants cautioned that even the best-prepared police can't go it alone. Around one-fifth of people experiencing homelessness have a severe mental health disorder. Almost as many have a substance-use disorder. To be effective, the police response cannot only be a police response.

“We've seen arguments that police shouldn't be responding to homeless people, that police shouldn't be responding to people in mental health crisis,” said Brian Jackson, a senior physical scientist at RAND who helps lead the criminal justice workshops. “Seeing those demands on protest signs, those are the same things we've been hearing on our panels for years.”

Communities are starting to experiment with different models. Some, like Indio, have paired police officers with social workers or clinical therapists. Others have created special units to respond to homelessness calls—or forwarded those calls to non-police crisis teams. With more than half a million people living without permanent shelter on any given night in America, those efforts are vital.

Communities are experimenting with different models. Some have paired police officers with social workers or clinical therapists.

In Long Beach, Calif., for example, police are just one part of a citywide response that also includes service providers, health officers, park superintendents, even city librarians. Every city department, in fact, can access and share basic data about people they encounter who need help: name, date of contact, services offered and accepted. That kind of coordinated effort is often what it takes to get results, the city's data show. On average, people experiencing homelessness decline help 16 times before they agree to enter housing or support services.

“If an officer shows up and just takes someone who is struggling to a hotel, then that's it, they're in a hotel for the night and it does very little to change things,” said Sgt. Brian Nystedt, who leads the police side of the city's response. “But if you link them into all of these services—if everybody is sharing data and working together—if we get to that, I think the response to homelessness in America would be completely different.”

Police agencies and the communities they serve need more data, and better data, if they want to address homelessness in a consistent way, researchers concluded. A good first step would be to establish a clear definition of who is homeless. Federal agencies provide no less than three possible definitions for homeless youth, for example. Without a single definition, communities can't know how many of their residents are experiencing homelessness, how the numbers are changing, or whether their efforts are making any difference. 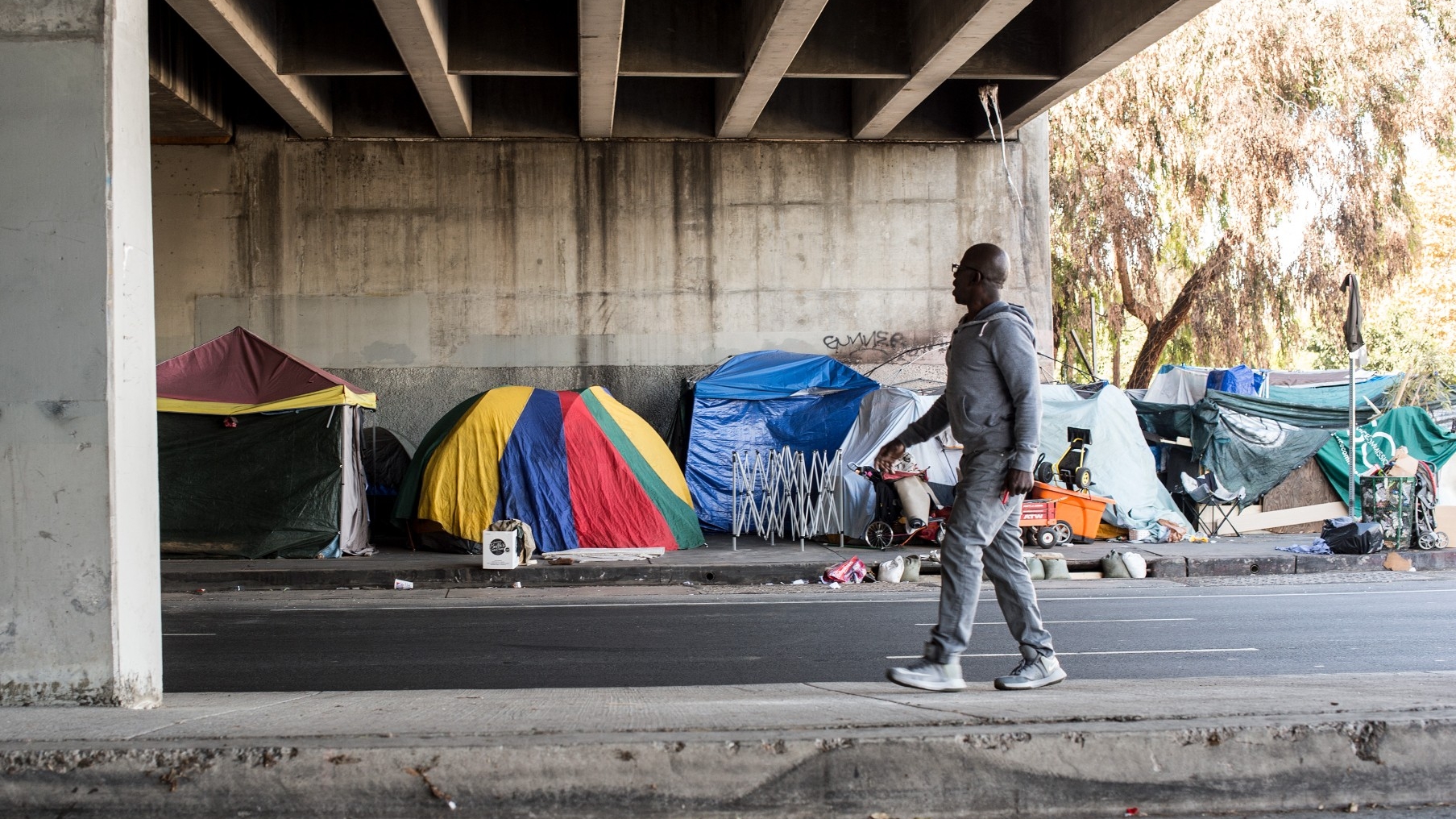 A tent encampment in West Los Angeles in November 2020

That would also allow for the in-depth, rigorous evaluations that researchers found are so often lacking. Police need national models—tried, tested, and proven to work—as they invest in new partnerships and new ways of working to address homelessness. “There's just not a lot of very strong research out there,” said Sean Goodison, the deputy director of the Police Executive Research Forum. “Police need really basic-level stuff—definitions, program evaluations. There's just a giant opportunity there.”

Police need national models—tried, tested, and proven to work—as they invest in new partnerships and new ways to address homelessness.

The National Institute of Justice funded the research as part of its multiyear contract with RAND to study issues in criminal justice. It responded to the findings by announcing $1.5 million in open funding “to assess the range of practices, strategies, and tactics used by police to respond to homelessness.” It asked for case studies, it asked for best practices, and it set a two-year deadline to get it done.

Indio isn't waiting that long. The city is working with researchers at Arizona State University to evaluate its police-community outreach program. Initial results from surveys and interviews showed improvements in measures of housing, employment, and perceptions of the police and city services.

“We used to give people a single chance: 'You don't want help? You can leave or go to jail,'” said Officer Steve Oehring, who shares a squad car with the program therapist, Cynthia Ferreiro. “That really doesn't take care of the problem long-term. The approach now is, 'How can we help you? Where can we take you? What do you need?'”

He has his own measure of success. He figures it's been around six months since he had to reach for his citation book while working with someone experiencing homelessness.