How to Prevent, Prepare for, and Respond to Mass Attacks 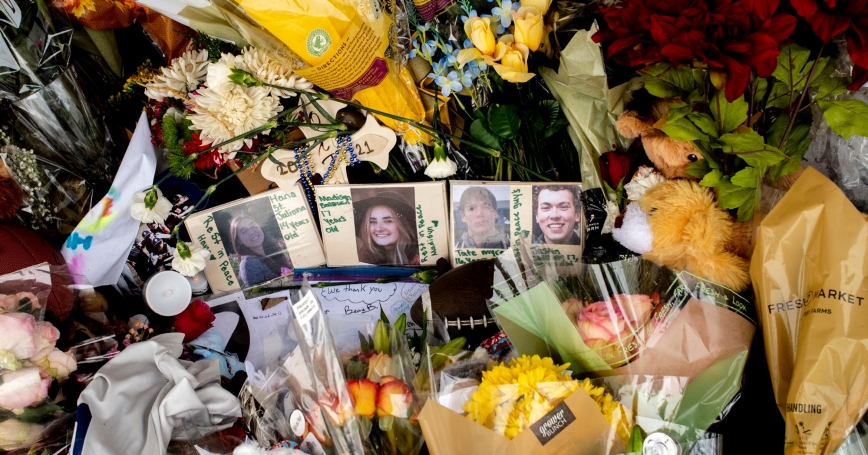 A memorial outside Oxford High School in Oxford, Michigan, after a 15-year-old allegedly killed four classmates and injured seven others on November 30, 2021

Put aside the politics for a moment, the pointing fingers, the thoughts and prayers and hopeless shrugs. What can people do right now to protect their communities from mass shootings?

Researchers at RAND have spent two years working to answer that question. They didn't just look at the deadliest shootings and ask what went wrong. They looked at would-be shootings that never made the news and asked what went right. The result is a step-by-step guide to prevent shootings and other mass attacks before they happen, and to save lives when they do. It's written for police, paramedics, local government officials—and for church leaders, concert promoters, grocery store owners, and school superintendents.

“I don't like having to live in a world in which I know my daughter has a lot of fear over this,” said John Hollywood, who led the effort as a senior operations researcher at RAND. “We have the findings, we have the tools, we have the processes that we need to really do a better job of getting a handle on this. It's a matter of going out and using them.”

In 2018, a woman in Everett, Washington, just north of Seattle, picked up a spiral notebook that had been lying on her grandson's bed. She flipped it open and found the detailed outline of a school shooting. Zip ties for the doors. Bombs beneath the bleachers. A date in April that would coincide with the Columbine shooting.

“I'm preparing myself,” her grandson had written. “I can't wait. My aim has gotten much more accurate.”

The woman did the most important thing she could do. She called for help.

RAND's study looked at 640 mass attack plots that endangered, or would have endangered, four or more people in a public place between 1995 and 2020. More than half were thwarted before anyone got hurt—and in two-thirds of those cases, it was because of a tip from the public. Yet previous research has shown that people are much more likely to try to talk to a potential shooter themselves or to do nothing than to call in a report.

Researchers wanted to provide tips and tools to prevent mass attacks that communities could implement themselves, no Senate vote or governor's signature required.

“We have to get people to trust their instincts, to know that if they think about something for more than about five seconds, they really need to take action,” said Tara Richardson, a senior consultant with Lafayette Group, a public safety consulting firm that partnered with RAND.

For years now, RAND has been pulling together evidence to inform the debate over which policies could slow gun violence in America, such as child-access prevention laws. But the mass attacks project had a different purpose, and a different audience. Researchers wanted to provide tips and tools that communities could implement themselves, no Senate vote or governor's signature required.

That starts with educating people about the specific warning signs they should watch for—words and actions that indicate not just motivation, but preparation for an attack. Those warning signs have not been well-publicized, but they should be. Public education campaigns could provide better guidance—beyond just “see something, say something”—about when people should reach for the phone.

Communities need to think of their response to such tips as a team effort. That means schools, mental health providers, social service agencies, major venue owners, and law enforcement all sharing information and establishing a single point person to follow up. That follow-up should be relentless and sustained. One of the biggest predictors of a plot reaching execution was information falling through the cracks.

In late November 2021, for example, rumors began to spread through the halls of Oxford High School in eastern Michigan that something terrible was about to happen. They were specific enough, and scary enough, that some students stayed home from school. “We got none of it,” the county sheriff said afterward.

During a break between classes, with the halls crowded with students, a 15-year-old boy walked out of a bathroom with a 9 mm handgun and opened fire. Four students died. Seven people were hurt. But the school had practiced active-shooter drills, and every classroom had a lock on the door. Students who fled the hallways knew to get into a classroom, lock and barricade the door, and grab anything they could to defend themselves—a hockey stick, a tape dispenser, scissors.

Run. Hide. Fight. When a shooting starts, those are, in order, the most effective ways to survive, and they should be as well-publicized as the warning signs. RAND's study included 65 cases in which people fought back—and in 85 percent of those cases, they stopped the gunfire or made the attacker flee. In 12 cases, people rushed the shooter from different directions—and in all 12 cases, they stopped the shooting.

Communities need to know how they would respond, too. Police drills need to emphasize a lesson that has been clear since Columbine: Don't wait, don't assemble a response team, just stop the shooting. But schools, shopping malls, and other so-called “soft targets” also need to train—with police and other community partners—until their response is seamless. Washington, D.C., for example, recently offered active-shooter training for nightlife and religious workers, with instruction on what to do if a gunman is nearby and how to tie a tourniquet.

RAND's study identified three additional steps that such potential targets can take to better protect people inside their buildings. They can ensure plenty of well-marked exits. They can provide longer walk-ups and controlled-entry areas, so people can see who's coming. And, like the high school in Oxford, they can put locks on the doors. One study found that, as of 2017, no active shooter in the United States had successfully breached a locked door.

One study found that, as of 2017, no active shooter in the United States had successfully breached a locked door.

“We have examples where a shooter shows up, the doors are locked, and the shooter is left to basically run around until the police show up,” Hollywood said. “You haven't heard about them because they weren't mass-casualty events.”

RAND and its partners on the project—Lafayette Group, RTI International, and Karchmer Associates—chose not to present their findings in an inch-thick research report. Instead, they took what they learned from the data and from interviews with dozens of experts and first responders, and used it to build a free, online tool, available to anyone.

The tool walks users through every step of preparing for, preventing, and responding to a mass attack. It includes links to funding sources, case studies, model programs, assessment tools, databases, and training guides. The National Institute of Justice sponsored the project.

“We wanted to give communities clear, concrete steps they can take to protect themselves,” said Dic Donohue, who came to the project as the director of the RAND Center for Quality Policing, a former Boston-area transit police officer—and a shooting survivor. A bullet severed his femoral artery during a gun battle with the Boston Marathon bombers in 2013.

“Community stakeholders such as schools or law enforcement agencies need to assess: 'Where are we missing things?'” he said. “It comes down to training and follow-up. Do they have relationships in the community? Can they get the word out? If something happens, God forbid, do they know how to reunite families?”

RAND's project had its roots in many places—in Orlando's Pulse nightclub, in the Route 91 Harvest country music festival in Las Vegas, in the First Baptist Church of Sutherland Springs, Texas. But one shooting in particular motivated the research. In February 2018, a former student who had threatened to kill people and was known to have weapons walked into Marjory Stoneman Douglas High School in Parkland, Florida, and started shooting. Seventeen people died. It was the deadliest school shooting since Sandy Hook—until this spring, when 19 children and two teachers were killed in Uvalde, Texas.

Just one day before the shooting in Parkland, a woman in Everett, Washington, called the police to report the notebook she had found in her grandson's room. Police arrived, searched the room, and found a rifle hidden in a guitar case. They pulled the grandson from his classroom at school and arrested him.

He had written in his notebook that he wanted to make his school attack “infamous.” It's not, because nothing fell through the cracks. He pleaded guilty to charges that included attempted first degree murder and illegal possession of an explosive device. He's now serving time in a Washington state prison.