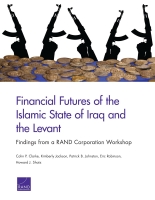 Financial Futures of the Islamic State of Iraq and the Levant

Findings from a RAND Corporation Workshop

In June 2016, RAND held a small workshop on Islamic State of Iraq and the Levant (ISIL) finances. Participants in the workshop included professionals with expertise in the Middle East, ISIL, counterterrorism, and economics. This report describes the likely evolution of ISIL finances under three specific scenarios: a continuation of the current campaign, a negotiated settlement in Syria and political accommodation in Iraq, and military victory without negotiated settlement or political accommodation. The discussion of potential consequences for ISIL across these three contrasting scenarios offered a number of implications for the counter-ISIL effort. These included taking actions to counter specific means of raising money within ISIL territory, using financial information to damage the group, degrading its ability to raise money across its territory, and ensuring that it does not shift to raising money from beyond its territory.

This project was sponsored by an interagency group within the U.S. government and conducted within the Intelligence Policy Center of the RAND National Defense Research Institute, a federally funded research and development center sponsored by the Office of the Secretary of Defense, the Joint Staff, the Unified Combatant Commands, the Navy, the Marine Corps, the defense agencies, and the defense Intelligence Community.