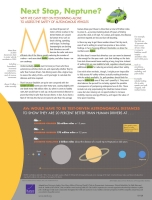 More than 90 percent of motor vehicle crashes in the United States are caused by human error, such as drunk driving, speeding, and fatigue. Technology heavyweights are betting that driverless cars will become the safer and more efficient ride of the future, greatly reducing the number of crashes — and associated deaths, injuries, and other losses — on our roadways.

Understandably, people want to know just how safe these autonomous vehicles (AVs) are, and especially whether they're safer than human drivers. Test-driving seems like a logical way to assess the safety of AVs — until you begin to calculate the distance and time required.

That's because fatalities are quite rare compared with the number of miles Americans drive every year, causing slightly over one death every 100 million miles. So, when it comes to fatality rates, AVs would have to rack up a truly astronomical distance to prove that they're safer than human drivers. In fact, if you have a fleet of 100 test AVs that are 20 percent safer than the average human driver, you'd have to drive them a total of 5 billion miles to prove it — a journey involving about 225 years of driving around the clock at 25 mph. For crashes and injuries, the distance and time required are less vast but still daunting.

Is there any way to get these numbers down? Not by much, even if we're willing to accept less-precise or less-certain findings. In fact, choosing different thresholds can drive the numbers even higher.

But this doesn't mean that driverless cars can never be deemed safe enough for the open road — just that holding out for data from test drives would mean waiting a long, long time. Instead of putting AVs on near-indefinite hold, regulators should pursue additional options for reducing uncertainty about their safety.

Even with other methods, though, it might prove impossible to fully assess AV safety without actually making driverless vehicles widely available. So, policymakers should look for ways to reduce risk even if they can't quantify it. They must also balance the pursuit for certainty against the possible consequences of postponing widespread use of AVs. These include not only perpetuating the fatalities human drivers cause but also missing out on opportunities to increase mobility, improve energy efficiency, and regain the value of time spent traveling.

AVs would have to be test-driven astronomical distances to Show THEY ARE 20 Percent Better Than Human Drivers at . . .

If this graphic were drawn to scale, Neptune would be in the next room.

2015 fatality data are from the Bureau of Transportation Statistics.

Adapted from Driving to Safety: How Many Miles of Driving Would It Take to Demonstrate Autonomous Vehicle Reliability? by Nidhi Kalra and Susan M. Paddock, RR-1478-RC, 2016, available at www.rand.org/t/RR1478.

The RAND Corporation is a research organization that develops solutions to public policy challenges to help make communities throughout the world safer and more secure, healthier and more prosperous. RAND is nonprofit, nonpartisan, and committed to the public interest. www.rand.org