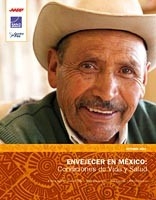 This analysis of aging and income security in Mexico establishes that the older population in Mexico is increasing quickly and that this population is especially vulnerable to poverty. Mexican citizens are living longer and overall have experienced an improvement in the quality of life compared to that of prior generations. However, this study demonstrates that social improvements are not affecting the daily lives of all persons equally. The authors attempt to uncover and highlight those differences. One of the primary challenges facing Mexico is a growing older population. The demographic transition in Mexico combined with the lack of formal sources of income in retirement place many older persons in a state of financial insecurity. The information contained in this monograph and the proposed policy research areas are intended to enlarge the portfolio of options for older Mexicans. The authors analyze wealth and sources of income during retirement, the relationship between health and wealth, urban and rural disparities, and the impact of migration spells to the United States on wealth accumulation and health insurance in Mexico (Spanish-language version).

The research described in this report was jointly sponsored by Centro Fox, AARP, and the RAND Corporation.