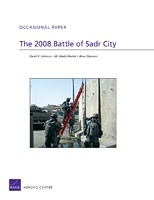 The 2008 Battle of Sadr City, which took place in Baghdad nearly 15 months after the beginning of the U.S. "surge" in Iraq, has received relatively little scholarly attention. However, the coalition's defeat of Jaish al-Mahdi after six weeks of high-intensity fighting offers important lessons for the U.S. Army as it prepares for future operations.

Using after-action reports, briefings, other primary sources, and interviews with combatants and officials involved in the fighting and its aftermath, the authors describe the battle, analyze its outcome, and derive implications for the conduct of land operations. Their analysis identifies the following factors as critical to the coalition victory: supporting ground maneuver elements with integrated intelligence, surveillance, and reconnaissance capabilities and strike assets; the key roles played by heavy forces, snipers, and special operations forces; decentralized decisionmaking; capable indigenous security forces; and rapid transitions from phase to phase.

The authors conclude that the Battle of Sadr City presents a new model for dealing with insurgent control of urban areas: treating an urban area as a wide-area security mission. Unlike previous urban operations against insurgents, in which cities were essentially besieged and then stormed, the objective in this battle was not to take and clear Sadr City but to create conditions that would make it both impossible for the insurgents to operate effectively and possible to restore security to the broader population.

The research described in this report was sponsored by the United States Army and conducted by RAND Arroyo Center.