Budgetary pressures imposed by Korea's rapidly aging population and declining fertility rates underscore the urgency of a medium-term fiscal consolidation framework. The author presents a plan for fiscal consolidation and budget reform in which a new parliamentary budget process would be established, centered on a fiscally constrained budget resolution that would be scheduled for adoption prior to consideration of revenue or spending bills. 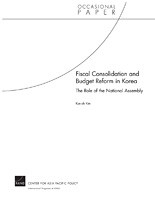 The Role of the National Assembly

Korea's fiscal responses to the financial crises of 1997–1998 and 2007–2010 led to a rapid accumulation of budget deficits and national debt. The Korean government needs to take preemptive measures to retain room for countercyclical policies. Korea's export-dependent economy is vulnerable to external shocks and Korea's rapidly aging population and declining fertility rate are imposing additional budgetary pressures on the government. Thus, restoring fiscal soundness to the Korean economic system is an urgent priority for Korean policymakers. The author presents a plan for fiscal consolidation and budget reform in which the Korean National Assembly (NA) would establish a new budget process, centered on a fiscally constrained budget resolution that would be scheduled for adoption prior to consideration of revenue or spending bills. Budget enforcement procedures similar to those employed by the U.S. Congress could be applied to Korea if tailored to the NA's unique constitutional constraints and budgetary processes.

The research described in this report was conducted within the RAND Center for Asia Pacific Policy (CAPP) under the auspices of the International Programs of the RAND Corporation.