Understanding the Returns from Cardiovascular and Stroke Research: The Policy Report

This project explores the impacts arising from cardiovascular and stroke research funded 15-20 years ago and attempts to draw out aspects of the research, researcher or environment that are associated with high or low impact. The project is a case study-based review of 29 cardiovascular and stroke research grants, funded in Australia, Canada and UK between 1989 and 1993. The case studies focused on the individual grants but considered the development of the investigators and ideas involved in the research projects from initiation to the present day. Grants were selected through a stratified random selection approach that aimed to include both high- and low-impact grants. The key messages are as follows: 1) The cases reveal that a large and diverse range of impacts arose from the 29 grants studied. 2) There are variations between the impacts derived from basic biomedical and clinical research. 3) There is no correlation between knowledge production and wider impacts 4) The majority of economic impacts identified come from a minority of projects. 5) We identified factors that appear to be associated with high and low impact. This article presents the key observations of the study and an overview of the methods involved. It has been written for funders of biomedical and health research and health services, health researchers, and policy makers in those fields. It will also be of interest to those involved in research and impact evaluation.

All funders have more opportunities for investment in research than they can support, many of which relate to areas of science of high potential interest and/or impact. How best to choose between these is a key issue for funders, the scientific community, governments and society. The “science of science” is a growing field that aims to understand what works in research funding (Marburger, 2005; Grant and Wooding, 2010). This requires a better understanding of research performance, and more importantly the drivers of improved performance. At a conceptual level we need to understand what factors lead to research impact. For example, what kinds of science, what kinds of scientists, and what settings are most conducive to ensuring the scientific success of research and its translation into societal benefits?

Project Retrosight was a multinational study that investigated the translation of, and payback from, basic biomedical and clinical cardiovascular and stroke research projects. The main project aims were to:

The name Project Retrosight is derived from two landmark studies in science policy. The first—Project Hindsight (1967)—was a study sponsored by US Department of Defense that examined the incremental advances of various technologies (Sherwin and Isenson, 1967). The second was Julius Comroe’s book, Retrospectroscope: Insights into Medical Discovery (Comroe, 1977). Comroe examined new life-saving advances in medicine and how they had come about. At the same time, in a more or less direct response to Project Hindsight, he worked with Robert Dripps to trace the research antecedents of clinical advances in cardiovascular medicine. This study was described in an article in Science (Comroe and Dripps, 1977). The idea of Project Retrosight was to develop these ideas by tracing prospectively, with the benefit of hindsight, the payback and translation of funded research projects.

Our approach involved identifying the principal investigators (PIs) of all grants awarded in the early 1990s for basic biomedical and clinical cardiovascular and stroke research by specific funders in Australia, Canada and the United Kingdom. These PIs were sent simple questionnaires that were used to estimate the impact of the work funded by the grant. A random sample of grants was then selected policy makers, changes in policy or practice, etc. The case studies were then coded qualitatively and analysed to identify factors that appeared to be associated with high and low impact in both academic and wider categories. The associations that emerged were then tested and refined in discussion with researchers, funders and policy makers, and developed into a series of policy implications for research funders. There are, of course, a number of limitations to the analysis. The number of case studies used in Project Retrosight can be viewed as both a limitation and a strength. Whilst the number of case studies is greater than in most other studies of a similar nature, the sample size may still not be using a sampling framework stratified according to location of research (Canada, Australia and UK), type of research (basic biomedical or clinical), size of research grant (large or small) and perception of impact by the PI (high or low). Detailed case studies were then developed for 29 grants (in total we approached 38 cases: 6 PIs declined to participate, 3 case studies were not completed/not included for other reasons). We chose a case study approach since, in general, case studies provide a rich source of material when “how” or “why” questions are proposed (Yin, 2003). In the context of Project Retrosight, the case studies provide a detailed picture of what led to establishing the grant, how the research progressed and how it subsequently developed.

A number of approaches have been developed to describe and capture the impacts of research (Brutscher, Wooding, and Grant, 2008). We used the Payback Framework (Buxton and Hanney, 1996), which has two elements: five payback categories, which we collapsed into two impact groups for some of our analysis (summarised in Figure 1); and the payback model. The Payback Framework provides a common structure for examining why the PI applied for the research grant and what he or she hoped to achieve with the funding; the responses of the funding committees; the research process, including collaborations, use of shared resources, etc.; research outputs (e.g. publications); how those outputs influenced subsequent research topics and careers; how the research was subsequently translated into “secondary outputs”, through influencing clinical policies or product development; and how the research then translated into improvements in health and broader economic benefits. 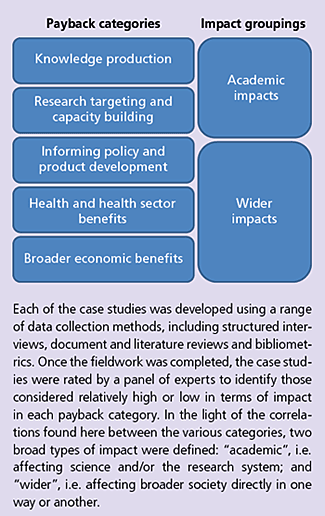 Examples of academic impacts included publication of papers, supervising a PhD, developing scientific methods subsequently used by other researchers, etc. Examples of wider impacts included citation in policy documents or guidelines, licensing intellectual property, briefing senior policy makers, changes in policy or practice, etc. The case studies were then coded qualitatively and analysed to identify factors that appeared to be associated with high and low impact in both academic and wider categories. The associations that emerged were then tested and refined in discussion with researchers, funders and policy makers, and developed into a series of policy implications for research funders.

There are, of course, a number of limitations to the analysis. The number of case studies used in Project Retrosight can be viewed as both a limitation and a strength. Whilst the number of case studies is greater than in most other studies of a similar nature (Wooding et al., 2005; Nason et al., 2008), the sample size may still not be large enough to rule out outcomes or differences that could have arisen by chance. Because of this, we have been deliberately cautious in interpreting our data and have tested the strength of any associations leading to policy observations. Other limitations include potential inconsistencies in case study reporting and possible confounders; for example, the definitions of basic biomedical and clinical research used, the scope of the case studies and the effects of negative findings. Equally there are significant strengths in the study method chosen, particularly in comparison to other sources of information on research funding policy. These strengths include the use of the Payback Framework to encourage consistency across cases and facilitate comparative analysis; quality assurance checks to ensure consistency across an international team; and consideration of both quantitative and qualitative case study material.

Summary of the Impacts Arising from Case Study Grants

Just as science is the effort to discover and increase human understanding of how the world works and how we can influence it, science policy should be about understanding how the world of science works and how we can influence it to maximise benefits for society. Studies like Project Retrosight contribute to the growing field of the “science of science”, providing an evidence base to inform research funders in their decision making.

HERG, Office of Health Economics and RAND Europe, Medical Research: What’s It Worth? Estimating the Economic Benefits from Medical Research in the UK, UK Evaluation Forum, 2008.