The Frequency, Severity, and Economic Consequences of Musculoskeletal Injuries to Firefighters in California

The most common work-related injuries among firefighters are musculoskeletal disorders (MSDs). The strict physical demands of the job and limited modified work opportunities suggest that MSDs are potentially more disruptive and costly to firefighters than to others. The importance of understanding the frequency and severity of firefighter MSDs has become heightened due to changes to the California workers' compensation landscape since 2004, including the reduction of permanent-disability ratings that occurred due to the adoption of a new disability rating system and new rules for apportioning disability with respect to job-related causation, the adoption of treatment guidelines to provide utilization review in workers' compensation medical care, and the imposition of caps on the number of times injured workers can be reimbursed for use of chiropractic care and physical therapy. Each of these could have a potentially disadvantageous and disproportionate impact on firefighters with MSDs. This article describes the average frequency and severity of work-related MSDs experienced by California firefighters; examines the impact of work-related MSDs on the firefighters' earnings and employment several years after injury; evaluates the reforms' impact on the ratings of firefighters with permanently disabling MSDs; and assesses whether reforms to the medical delivery system affected the employment outcomes of firefighters with MSDs.

Firefighting is one of the most important and most dangerous occupations in the United States. While firefighters face a number of unique risk factors in their jobs, the most common work-related injuries among firefighters are musculoskeletal disorders (MSDs). The strict physical demands of the job and limited modified work opportunities suggest that MSDs are potentially more disruptive and costly to firefighters than to people in other lines of work.

The importance of understanding the frequency and severity of firefighter MSDs has become heightened due to recent changes to the California workers' compensation landscape. Since 2004, there have been a number of changes to the workers' compensation system affecting both the level of compensation and the type and quantity of medical treatment provided to injured workers. These changes include the reduction of permanent-disability ratings that occurred due to the adoption of a new disability rating system and new rules for apportioning disability with respect to job-related causation, the adoption of treatment guidelines to provide utilization review in workers' compensation medical care, and the imposition of caps on the number of times injured workers can be reimbursed for use of chiropractic care and physical therapy. Each of these could have a potentially disadvantageous and disproportionate impact on firefighters with MSDs.

To develop a greater understanding of firefighter MSD risk and how these workers are treated by the workers' compensation system, this study pursued the following research objectives:

We utilize a variety of methods and sources of data to address these questions. In this summary, we highlight our key findings.

We use Bureau of Labor Statistics (BLS) injury and illness data from California for the years 2003–2007 to compare injury frequency and severity for firefighters with those of people in other occupations. Our review of these data demonstrates that firefighters face elevated risk from MSDs. Moreover, the risk is especially pronounced for firefighters 55 and older.

Specifically, we find the following:

The sharp increase in the frequency of MSDs for older firefighters is consistent with the idea that the physical nature of the job exposes them to cumulative trauma, making them more susceptible to disabling MSDs at older ages. We note, however, that firefighters do receive special disability compensation and retirement benefits that could influence the reported severity and frequency of occupational injuries.

The previous section indicates that firefighters, particularly older firefighters, are at greater risk of injuries, and that these injuries might be more severe in terms of their average number of lost workdays. Lost workdays represent a fairly limited measure of economic impact, however, especially in the case of permanently disabling injuries. Here, we use a large sample of permanent-disability claims for workers in California, including firefighters, to examine the earnings and employment of firefighters up to three years after an injury.*

When we compare across occupations, we find that the impact of a disabling injury on the employment of firefighters is similar to that of other workers in the public sector but considerably less severe than for many private-sector occupations. This finding is highlighted in Figure 1, which reports the relative employment ratios before and after injury, by occupation.** We compare firefighters to some other public safety employees (police officers and corrections officers), other public employees in a nonsafety occupation (teachers), and private-sector workers with physically demanding jobs and similar demographic profiles (construction workers and laborers). It is clear from the figure that the impact of a permanently disabling injury is considerably worse for workers in the two private-sector occupations we consider than for the public-sector workers. There is some recovery after the first six quarters after injury, but the long-term effects are extreme. As we would expect, these differences in relative employment are consistent with the differences we see in earnings losses associated with disability.

Relative Employment Ratios Before and After Injury, by Occupation 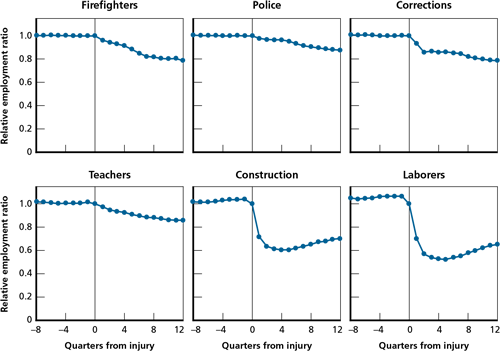 We also compare the employment outcomes of firefighters with four different categories of injuries: back injuries, knee injuries, shoulder injuries, and heart disease. We find the following:

While losses are relatively minor for firefighters on average, older firefighters experience more significant losses. In Figure 2, we compare the relative employment ratios of workers with back injuries by age and occupation. Each set of bars indicates the relative employment ratios for four different age categories by occupation. In the figure, as was the case with all injuries, it is clear that the decline in employment associated with a disability for firefighters is less severe for younger workers but that, for older firefighters, it is comparable to the private-sector workers (which is not true for the other public workers).

Relative Employment Ratios for Workers with Back Injuries Two Years After Injury, by Age and Occupation 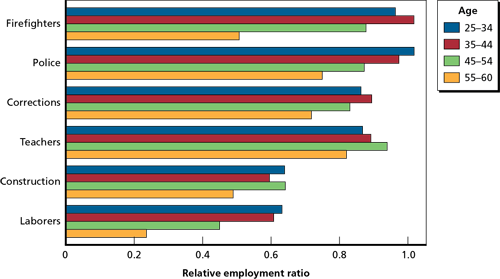 Assessing the Impact of Reforms on Disability Ratings for Firefighters

Trends in Permanent-Disability Ratings, by Occupation 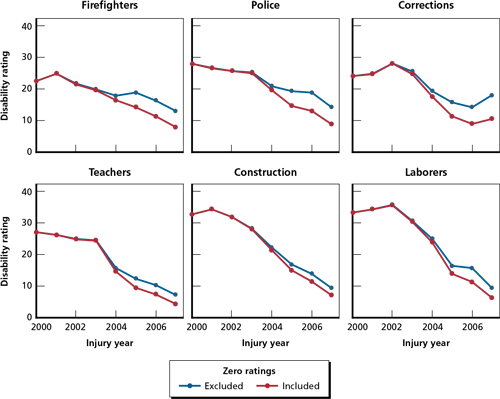 Evaluating the Impact of Medical Reforms on Employment Outcomes for Firefighters

A number of reforms have been adopted in California affecting the medical treatment after a workplace injury. In particular, Labor Code 4604.5 imposes a limit of 24 visits to a doctor of chiropractic (DC) or physical therapist (PT) for the life of a workers' compensation claim occurring on or after January 1, 2004, unless the employer authorizes additional treatments. Furthermore, Labor Code 4610 was also adopted, requiring employers to implement utilization review systems consistent with the American College of Occupational and Environmental Medicine (ACOEM) guidelines or some other approved set of guidelines.

To evaluate the impact of the reforms, we employ a variety of methods. First, we perform a systematic literature review and analyze the Medical Expenditure Panel Survey (MEPS) to determine average utilization rates for DC and PT treatments. Next, we perform a systematic literature review to assess the existing evidence on the effectiveness of DC and PT treatments, with a focus on long-term treatments, relative to alternative methods. Finally, we conduct our own empirical analyses to evaluate whether the employment outcomes of firefighters were affected by the reforms.

Based on our utilization literature review, rates for DC and PT treatments vary by type of injury, workers' compensation status, and geographic location. Specifically, we find the following:

Our analysis of MEPS yields consistent estimates with previous nationally representative samples of DC and PT utilization. Further, we find that approximately 10–15 percent of patients who go to a DC or PT at least once will exceed 24 visits. Workers' compensation claimants with an MSD who went to a physical therapist represent the highest proportion of more than 24 visits, at 15.7 percent.***

Most studies evaluating the health effects of DC and PT treatments found mildly positive results relative to general practitioner (GP) care and significant improvements relative to placebos. The evidence regarding return-to-work (RTW) outcomes and cost-effectiveness was mixed and weak. While some studies do find that DC and PT treatments are marginally cost-effective and return injured workers to work faster, they are sparse, and many studies find that alternative treatments from a GP are more cost-effective. However, there is still a lack of evidence on long-term treatments.

Using our findings, we can draw some conclusions as to the overall impact of the recent cap on DC and PT treatments on firefighter outcomes:

Empirical Analysis of the Impact of the Medical Reforms

We use a statistical model that isolates the impact of the reforms from other potentially confounding factors in order to estimate whether the reforms had an impact on the employment outcomes of injured workers. Specifically, we estimate a series of multivariate regression models that estimate the likelihood that the injured worker has positive earnings in the eighth quarter after injury as a function of other characteristics of individuals. The results of our statistical analysis are reported in Table 1.

Estimates from a Statistical Model of the Impact of the Medical Reforms on Employment Outcomes for Disabled Workers: Dependent Variable as Likelihood of Working Two Years After Injury

The table provides little evidence to suggest that the reforms had a significant negative impact on employment outcomes for injured workers, and essentially no evidence of an effect on firefighters. The only coefficient that is statistically significant at conventional levels is the first estimate—the impact of the reforms on all workers for all injuries. The effect suggests a reduction of –0.03 to the relative employment ratio. The average employment level in quarter 8 of workers in our sample is 0.62, so this represents a reduction in the likelihood of working of about –4.8 percent.

It can be challenging to draw policy implications from a null result such as this. We feel that it is important to stress that our findings do not mean that the medical reforms had no effect. Rather, our findings suggest either that any effect on firefighters was too small in the average worker for us to detect or that any effect was offset by other changes in the economy or the workers' compensation system. Whether the reforms had a more significant impact on workers in other occupations is unclear, though we feel that it is a subject worthy of further research.

** The relative employment ratios are defined as the average likelihood that an injured worker is employed compared to that of the uninjured control workers. So, a relative employment ratio of 0.8 in a quarter indicates that the injured worker is, on average, 20 percent less likely to be employed in that quarter than they would have been absent the injury.

*** The reason our MEPS estimates for PT utilization are slightly higher than for DC utilization is probably because MEPS combines PT and occupational therapy into one category.